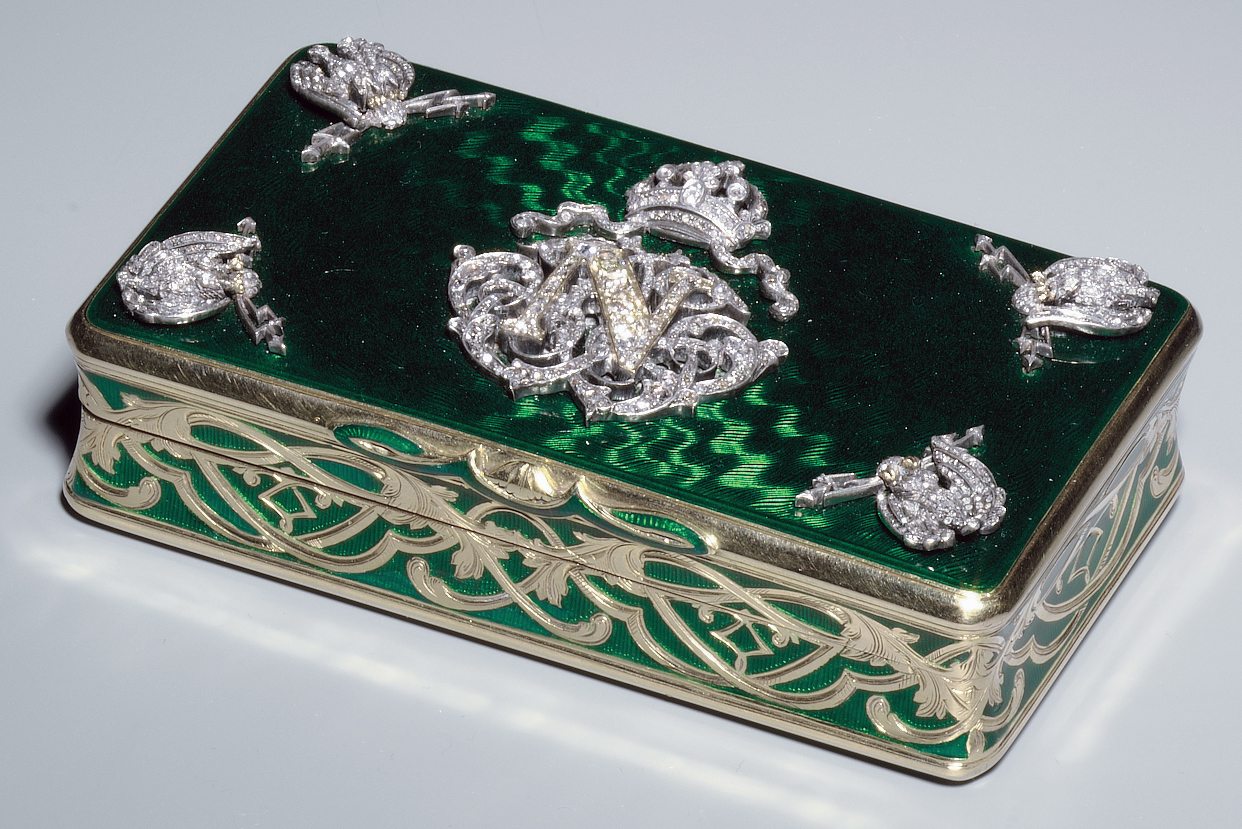 The interior is engraved ‘Presented to | Robert Ferguson MD | by | His Majesty Emperor Napoleon III’.

The firm of Lemonnier & Cie., whose sapphire and emerald parures for Isabella II, Queen of Spain, had attracted much attention at the Great Exhibition of 1851 in London, was appointed Crown jeweler by the Prince-President Napoleon when he assumed the title of emperor. Lemonnier received numerous imperial commissions – frequently involving the re-setting of historical gems from the Trésor d’Etat – that were executed in a large workshop paid for by the Privy Purse. Following the fall and exile of Napoleon III after the Franco-Prussian War of 1870, the firm went into rapid decline, Gabriel Lemonnier himself dying in penury in 1882.

The Lemonnier workshop, headed by a renowned craftsman called Maheu, specialized in gem-set jewellery; items such as snuff boxes, somewhat outside the jeweller’s usual domainm were supplied by independent goldsmiths, including Tronquoy. In this practice Lemonnier followed the well-established precedent of the firm Nitot & fils, jewelers to Napoleon I, which added its name to snuff boxes made by eminent masters such as Adrien-Jean-Maximilien Vachette and Pierre-André Montauban.

Louis-François Tronquoy registered his mark in 1827 and continued working until 1871. Judging by the number of surviving examples, it is evident that he specialized in presentation snuff boxes. Generally of heavier weight than comparable pieces made in Germany or Switzerland, the boxes were either rectangular or cartouche-shaped and usually incorporated some form of strapwork decoration on the sides. If enamel was used, the palette was restricted to blue or, more rarely, red and green. The lids were initially undecorated, thereby leaving room for the subsequent application of jeweled ciphers and emblems as the commission required. On the present snuff box the lid has been set with the crowned initial ‘N’ and four imperial eagles – a conscious reference to, and evocation of, the emperor’s predecessor, Napoleon I. The number and size of the diamonds used in the setting obviously greatly influenced the value and was a means of marking different levels of distinction. Quite often the recipient had the larger stones extracted in order to sell them and thereby profit from the capital value of the gift. The resultant gaps in the mounts were then filled with pastes.