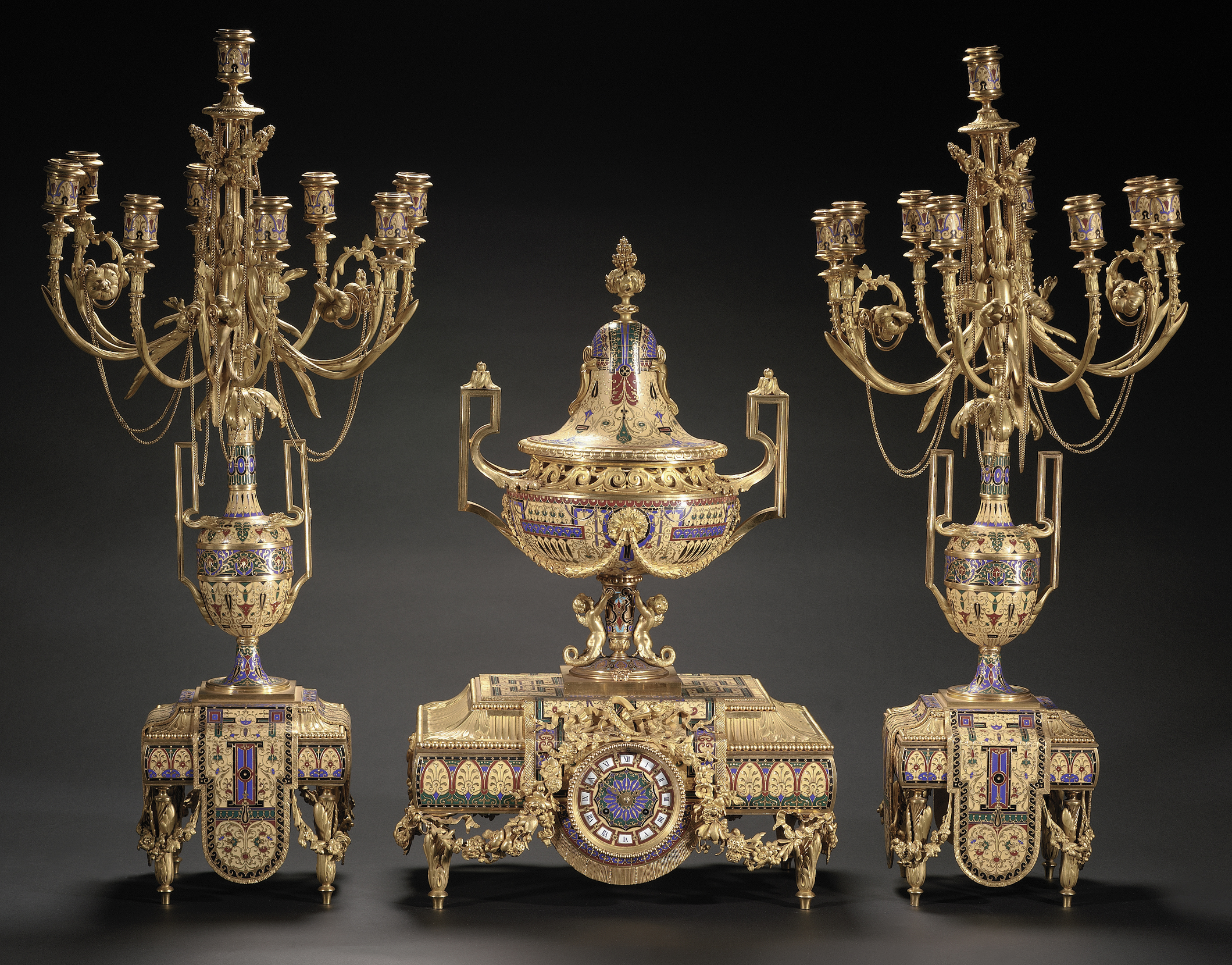 This mantel garniture originally formed part of the decoration of the library in the William H. Vanderbilt house, 640 Fifth Avenue, New York, built between 1879 and 1882, to the designs of Christian Herter and John B. Snook. Christian, as one of the two brothers of Herter Brothers, was also responsible for the interior furnishings – which alone were estimated to have cost $800,000. This prodigious sum provided for a setting appropriate to the social and economic status of Vanderbilt, then considered the richest man in America.

To achieve the required effect, where ‘every surface is coloured, one might say weighted with ornament’, Christian Herter made use of many artists and suppliers, including Barbedienne. Connections between the two firms may be traced back at lest to circa 1867, when Barbedienne made an extraordinary clock designed by Gustave Herther and Louis-Constant Sévin. Thereafter Barbedienne bronzes, either specifically commissioned or drawn from its extensive catalogue, were incorporated into the interiors designed by the Herter Brothers.

At 640 Fifth Avenue Barbedienne’s work was much in evidence – most spectacularly in a gilt-bronze replica of Lorenzo Ghiberti’s Gates of Paradise, which Vanderbilt had acquired in 1880 at the sale of the collection of Prince Anatole Demidoff at San Donato. Two ornate cabinets in the drawing room, and a third intended to house Vanderbilt’s collection of ivories and enamels, were almost certainly bespoke commissions from Barbedienne. To these may possibly be added the present garniture. Installed in the library, it formed part of a decoration that sought to fuse Greek and Roman themes with ‘the impression of richness proper to a fully upholstered modern room’. Edward Strachan, in his description of the interior, observed ‘the mantel garniture, clock and lustres, is of that phase of Marie Antoinette decoration which is sufficiently classical to go with a Greek environment’. Beyond a general contribution to the ‘Attic aspect’ of the design, this garniture has a topical association in that the lambrequins that hang from the candelabra plinths echo the carved drapery on the monumental library table, specially designed for the room by the Herter Brothers.