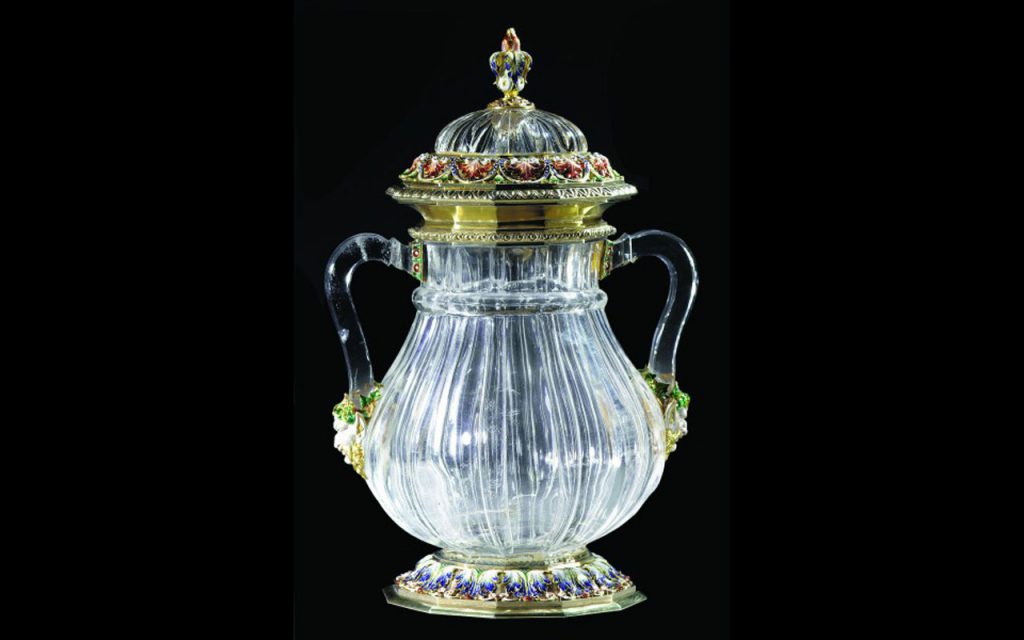 An inscription on the original design for this covered cup indicates that it was the last object made by Jean-Valentin Morel, prior to his death in 1860. Jean-Valentin Morel was particularly noted for his skill in carving hardstone, and he observed of this activity: “I resolutely set about restoring to the profession of lapidary the importance it had in the hands of the old masters”. As well as interpreting old pieces, or producing replicas, Morel was sometimes commissioned by collectors to provide mounts for antique vessels. The present covered cup is an example of this particular activity.

The Nucleus is a rock crystal ewer of the 14th/15th century, similar in form to another in the Victoria & Albert Museum, London. To this Morel has added a second handle – carved of clearer crystal and, upon examination from the inside, evidently glued to the body of the vessel – and a domed lid. These components are held together by enamelled silver-gilt and gold mounts that are typical of Morel’s evocation of the art of earlier goldsmiths. Stylistically the mounts recall the work of the blanc et vert atelier that flourished in Paris during the mid-17th century. More particularly, the foliate border and satyrs’ masks appear to have been inspired by a ewer originally in the collection of Louis XIV and now in the Louvre.