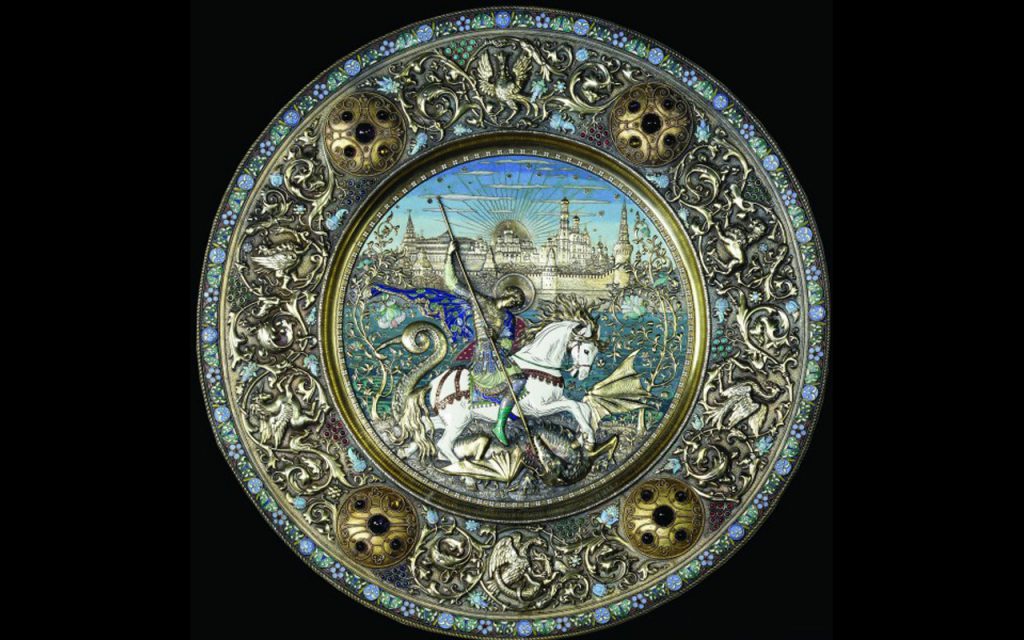 The reverse is engraved with a French translation of the Cyrillic presentation inscription that corders the central field: ‘A Monsieur Emile Loubet Président de la République Française la ville de Moscou 1902’. The silversmith also engraved his name ‘Ovtschinnicow’ for the benefit of the recipient.

The cult of St. George flourished in Russia during the reign of Yaroslav the Wise in the 11th century, and from then on St. George remained one of the most venerated saints. By the 14th century icon painters chose to depict, almost to the exclusion of any other subject from the saint’s life, his combat with a dragon – a classic image of the triumph of good over evil. As a patron saint of Russia and of the grand princes of Muscovy, St. George, with the vanquished dragon, was used in the state coat of arms and appeared on coins minted in Moscow. Thus the iconography available to Ovchinnikov when making this charger was rich with precedent and symbolism. As well as the allusion to past history, it is conceivable that Ovchinnikov was aware of Viktor Vasnetsov’s designs for the central gable over the portal of the Tretyakov Gallery in Moscow, which featured a bas-relief of the warrior saint and his adversary. An almost identical figural arrangement to that used here by Ovchinnikov was repeated by Ivan Khlebnikov on a filigree enamel Easter egg, made between 1908 and 1917, now in the Hillwood Museum, Washington DC.