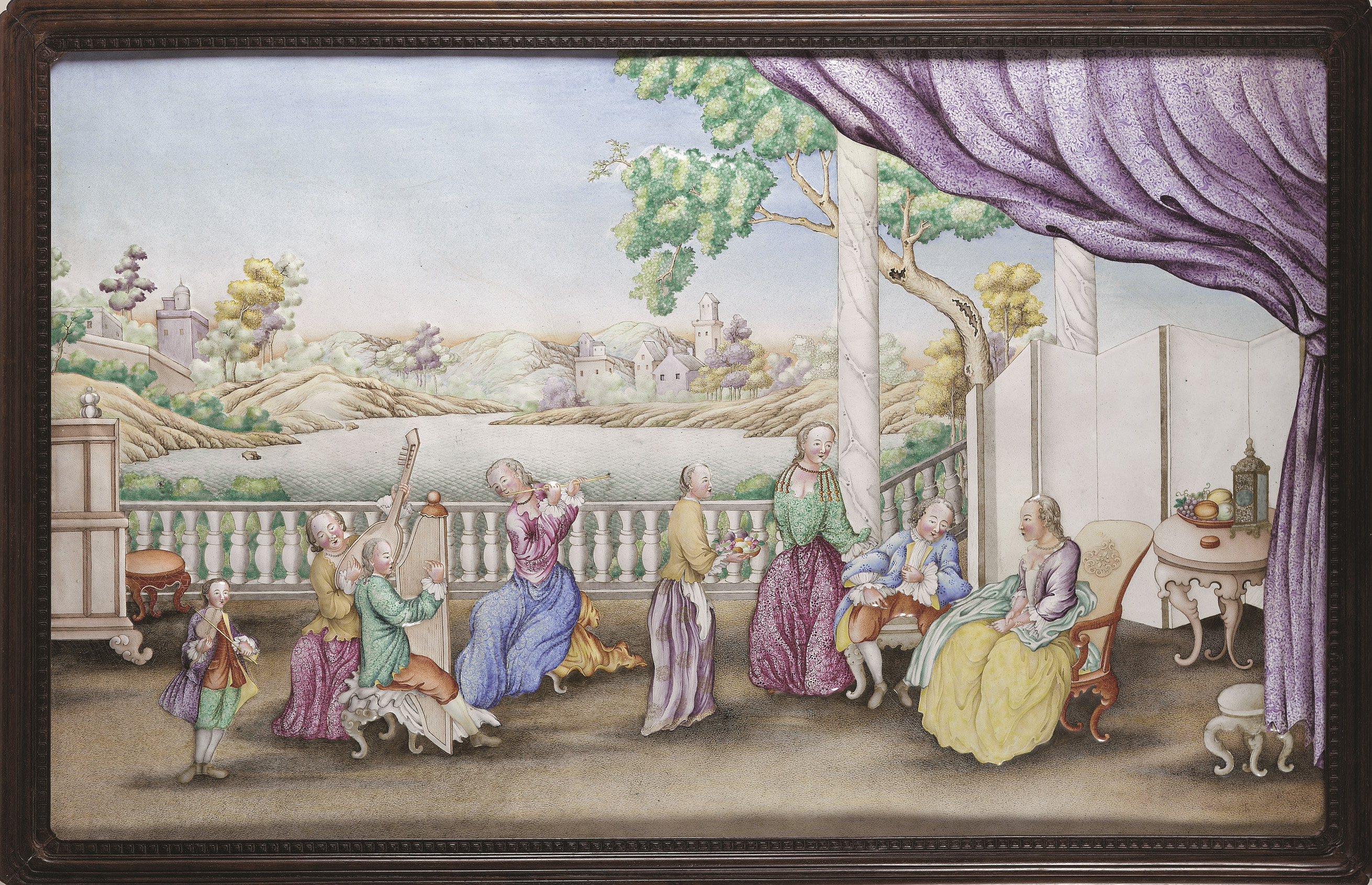 The group of bas-relief painted enamel panels produced in China during the 18th century, of which this is an imposing example, has been the subject of speculation, on account of both place of manufacture and intended destination. The subjects represented range from European idylls derived from prints to Chinese landscapes and domestic interiors. As well as the distinctive repoussé that defines certain features of the compositions, all the plaques show an attempt to use linear perspective and shading to convey space and volume – European conventions that had seeped into the Chinese consciousness at the beginning of the 18th century. The spur for these innovations was the fascination of successive emperors’ – at times combined with revulsion – for the fashions and possessions of the visitors from the Western Ocean (xiyang). In the mid 18th century the Qianlong emperor built palaces in the western taste at the Yuanming yuam outside Beijing, where tribute borne by the Europeans was hoarded. Given the imperial predilection for things occidental, it has been argued that these panels were made for the decoration of these palaces and, further, that they were painted in the Beijing enamel workshops.

Although two panels – of Chinese landscapes – in the Palace Museum, Beijing, have an imperial provenance, the same cannot be assumed for all the others. Indeed, a group of eight of them were acquired in Guangzhou during the last third of the 18th century by agents of the Dutch lawyer and avid sinologist, Jean Theodore Royer. What seems likely is that some – perhaps the larger pieces – were intended for the imperial court, but that others were destined for more general consumption, both at home and abroad. This latter market also acts as plausible guide to the location of manufacture. While the earliest essays in ‘exotic’ western-style painting in china were confined to the imperial ateliers in Beijing, with local artists being supervised by Europeans, the workshops of Guangzhou rapidly developed commensurate skills and were able to execute work of exceptional quality, often on a substantial scale. As a relatively cosmopolitan port that acted as the gateway for foreigners into China, Guangzhou was ideally placed to absorb new influences. Further, its flourishing economy created an affluent merchant class, not only keen to acquire luxury wares but also open to the eccentricities of the outside world. It is in such an environment that these panels were made.