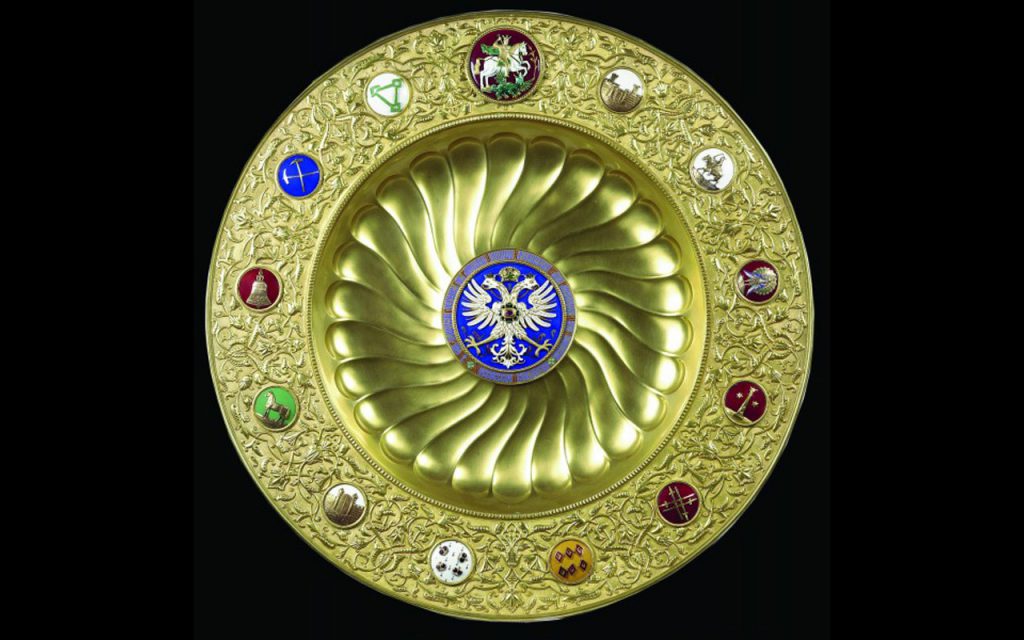 The imperial eagle at the centre of the dish is bordered by an inscription that translates ‘On the day of the holy coronation of the Emperor Alexander Alexandrovich and the Empress Maria Feodorovna from the Moscow nobility’; the rim bears the enamelled armorials of thirteen Russian cities, with the arms of Moscow at the apex.

The coronation took place in the Moscow Kremlin on 27 May 1883. At this date the firm of Ovchinnikov, granted the title of Court Supplier in 1881, appears to have specialised in producing bread and salt dishes for such events. Another example made by the firm, presented on the same occasion by the citizens of the town of Ivanovo-Vosnesensk, is in the Hillwood Museum, Washington DC. Foreign statesmen also received them to commemorate an official visit: for example, RUS 114, given to the French President Emile Loubet in 1902.

In Russia it was a traditional form of welcome to offer bread and salt to important visitors and to newly wed couples. Further, at the time of a coronation in Moscow provincial dignitaries made a similar offering of bread and salt, as well as other gifts, to the emperor. The round loaf, resting on an embroidered cloth covering the dish, had a salt cellar placed on top of it, sometimes in the form of a chair.