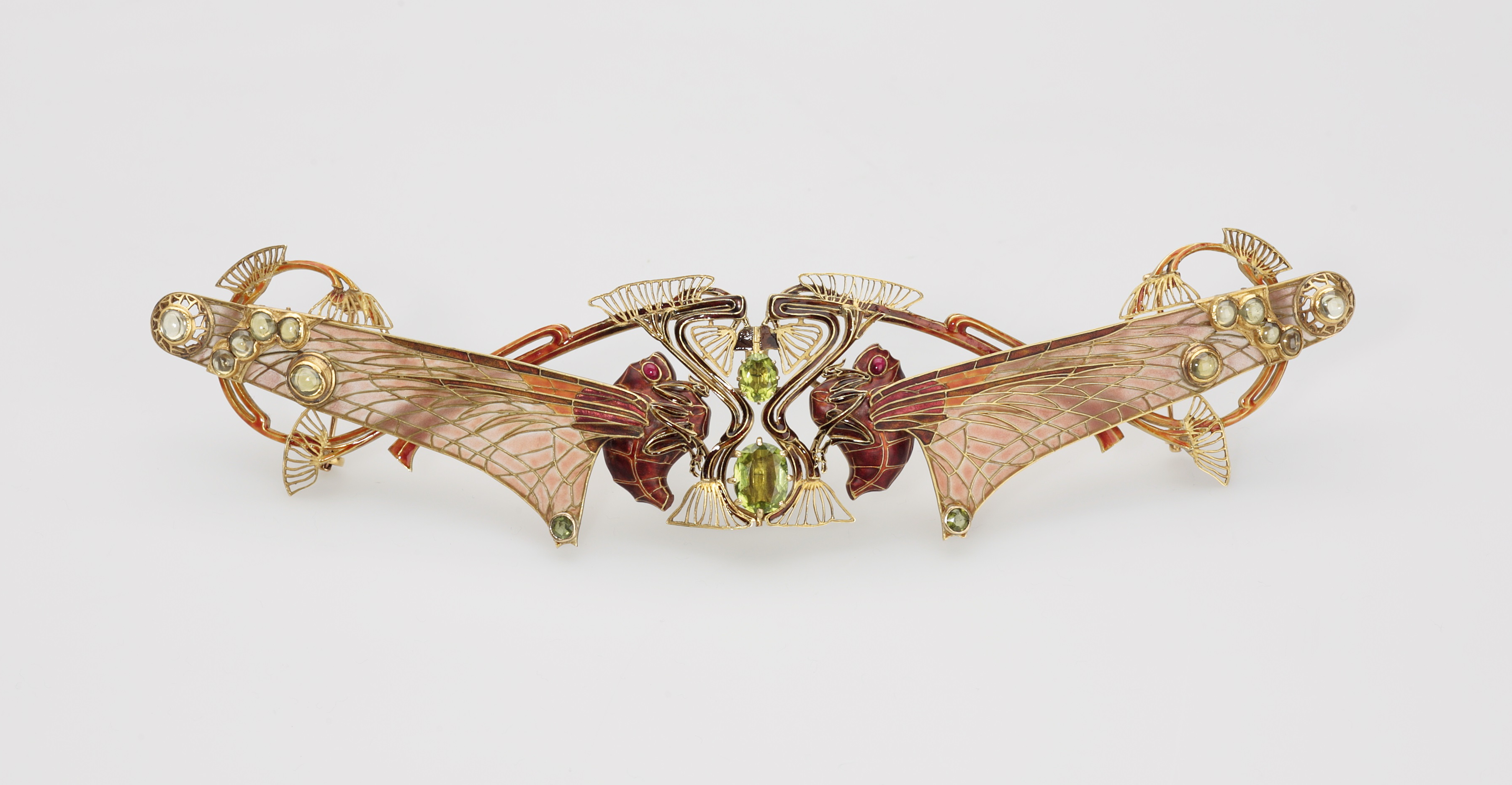 René Lalique (1860 – 1945) was the presiding genius of Art Nouveau jewellery, his work embodying a remarkable combination of technical virtuosity and creative vigour. His early education had nurtured these attributes: an apprenticeship under the Parisian jeweller Luis Aucoc followed by a sojourn at Sydenham College, London, where the spirit of the Arts and Crafts movement flourished. When Lalique first returned to Paris his designs were traditional in style, but this changed in the mid 1880s, especially after he took over the workshop of Jules Destapes and was able to work independently. Drawing inspiration from nature, he reinterpreted it with exquisite artificiality using gold, enamel and gems, as well as other materials such as ivory and bone, traditionally outside the remit of haute-joaillerie. In so doing he broke away from the shackles of historicism that had confined much of the 19th century and further, as The Studio noted in 1905, ‘freed us from the tyranny of the diamond’. Lalique’s achievement in emancipating the jeweller’s art, as well as his almost single-handed revitalisation of jewellery design, was recognised at the Paris Exposition Universelle of 1900 when he was awarded a Grand Prix and the rosette of the Légion d’honneur.

Lalique’s achievement as a jeweller is epitomised in this corsage ornament. The motifs of insects and seed pods, although attenuated and stylised in representation, reflect a direct and personal response to nature. Many of his works allude to the cycle of the seasons as emblems of birth, death and rebirth. Here autumn, with its connotations of melancholy and transience through decay, has been suggested by both the skeletal gold openwork of the seed pods and the predominant russet tonality. These colours are rendered with great subtlety and variety in enamel. The bodies of the insects are decorated in matt semi-opaque enamel. Exactly the same enamel was used for the lower part of the wings; however, variations in colour were achieved by lining some of the champlevé compartments with silver foil, thereby creating a brighter and more reflective ground. Alongside, select compartments were filled with opaque enamel in shades of muted orange, while the major part of each wing was defined in pink-flushed and frosted plique à jour enamel. By contrast, the insects’ legs and the scrolling stems behind are in high gloss enamel. This play of texture and colour is continued in the choice of gems. The insects’ cabochon ruby eyes tone with the adjacent enamel colours, while on the wing tips a subtle contrast is created between the shiny pale green peridot cabochons and surrounding plique à jour enamel. The central composition, however, is a more strident juxtaposition based on complementary colours: the vivid line green of the facetted peridots and burnt red enamel.