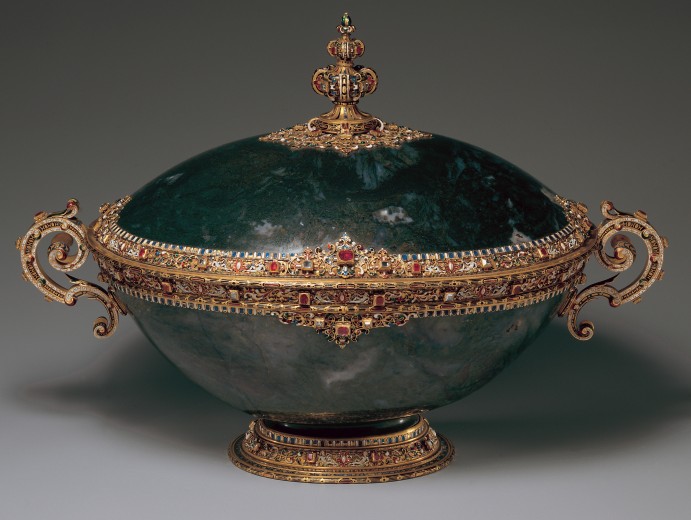 Reinhold Vasters (1827-1909) registered his mark in 1853 and in the same year he was appointed restorer of the Aachen Cathedral treasury. At the outset of his career, as well as fulfilling his role at the treasury Vasters specialised in making liturgical silver in Romanesque and Gothic styles. The subsequent shift in direction of his activities can without doubt be attributed to his contact with Frédéric Spitzer (1815-1890), who owned an antiques business in Aachen during the 1850s and 1860s.

The Vienna-born Spitzer was a brilliant and enterprising dealer who sought esteem as a connoisseur and succeeded in attracting the attention of the most elevated social circles. The setting for this was his house at 33 rue de Villejust, Paris, later to be known as the Musée Spitzer. Here he displayed a spectacular away of works of art, where magnificent period pieces stood side by side with others either ‘improved’ or totally imitative. For the latter categories he relied upon a number of highly skilled craftsmen, including Vasters in Aachen and Alfred André in Paris.

The evidence for the connection between Spitzer and Vasters is based, circumstantially, upon a number of designs in a large archive of drawings from the Vasters workshop that relate to objects known to have belonged to Spitzer. Among those are several studies of the present covered bowl, which was included in an auction of property belonging to Spitzer held in New York in 1929. One drawing depicts the complete vessel which, although immediately recognisable, differs in certain details – the profile of the bowl and the design of the rim mount. Other sheets show variant designs for the mounts, including the ones adopted when the work was executed. One such modification was the introduction of recumbent nudes, which Hackenbroch has suggested Vasters derived from the work of goldsmiths of Abraham Lotter’s circle in Augsburg.