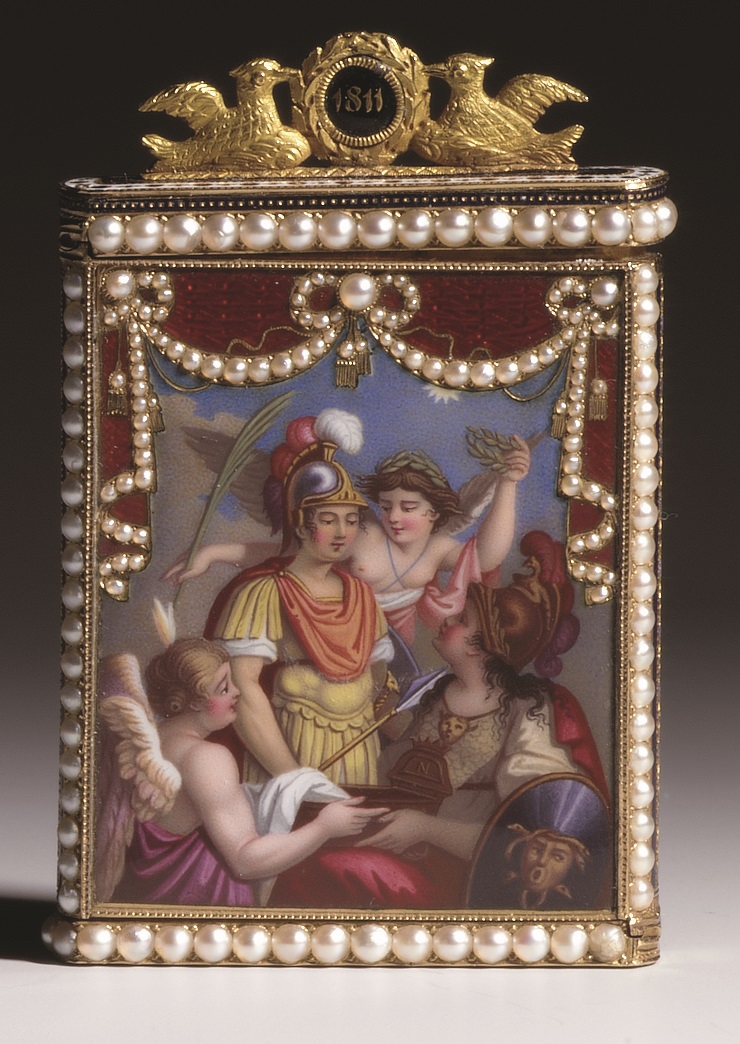 The front of the almanac is painted with an allegorical celebration of the birth of François Joseph Charles, styled King of Rome, son of Napoleon I, Emperor of the French, and his second consort, born Marie-Louise, Archduchess of Austria. Minerva, goddess of wisdom, holds the cradle with an N-crowned headboard, while Cupid, Mars and Victory look on. The reverse is decorated in cerulean blue champlevé enamel with the signs of the zodiac, suitable motifs for an almanac. Within there is a handwritten calendar of saints bound in enamelled gold covers, while the hinged base opens to reveal a vinaigrette.

The technique and quality of the painted enamel are typical of contemporary Swiss work. François-Regnault Nitot, if previously unaware, would have had the opportunity to examine the skills of the Genevois enamellers at the exhibition held in Paris in 1806. Though they were jewellers, his firm engaged outside craftsmen for work that was beyond its traditional remit. Thus the almanac could have been painted either in Paris by a Swiss artist or in Geneva for this particular phase of its decoration. Either way, its appearance on an object destined for the most elevated of patrons demonstrates that Swiss painted enamels were recognised as being of the highest quality. Henri Vever noted that the Empress Marie-Louise, brought up modestly and simply, did not buy extravagantly on her own behalf, unlike her predecessor the Empress Josephine. When she made purchases they tended to be sentimental souvenirs – of which this almanac is typical – and acrostic bracelets, where the initials of the coloured stones spelt the names of her beloved. For this piece, commemorating the birth of her son, the Empress paid 750 francs.