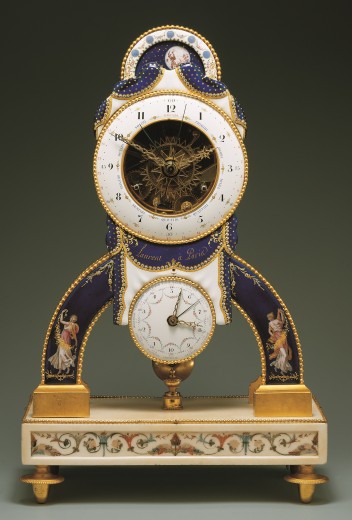 painted marble and gilt-metal, copper with opaque, translucent and painted enamel with paillons

In September 1793 Gilbert Romme, president of the French commission for weights and measures, put forward for the consideration of the Convention proposals to decimalise the measures of weight, distance and time. The following month the recommendations for a ten-hour day, beginning at midnight, were adopted. In November a further decree clarified certain details.

Recognising the considerable impact this legislation would have on the populace, not least the need to modify all timepieces functioning on the old system, the Convention agreed that decimal time would not become obligatory until 22 September 1794 (1er Vendémiaire an III). Concordance tables were published to familiarise people with the decimal system and competitions were held for clock and watchmakers to resolve the horological problems it presented. Contrary to what was hoped, the results of the competitions merely exposed new drawbacks. Apart from the technical difficulties, it was soon realised that the decimal measurement of time, unlike that of weights and volume, offered few practical benefits. Consequently, on the 7 April 1795 the Convention ‘indefinitely suspended’ the decree, thereby recognising that the duo-decimal system was too ingrained in the public’s mind to be replaced.

As the period when decimal time was under consideration in France was brief, and enthusiasm for it limited, it is not surprising that relatively few timepieces featuring the system were produced. Of those realised, the most popular was an enamelled skeleton clock, such as the present, with two dials and moon-phase. The counter enamel of the decimal dial on this clock is dated ‘lan 2 RF’, indicating that it was completed before 21 September 1794, the last day of the second year of the Republican calendar, and therefore conforming to the Convention’s deadline for decimal timekeeping, 1er Vendémiaire year three.

One dial is signed by Joseph Coteau (1740-1801), a native of Geneva who worked in Paris as an enameller of clock dials and snuff boxes. From 1780 until 1784, when his irascible character led to the termination of his contract, Coteau was employed at Sèvres. There he specialised in jewelled enamelling on porcelain, using a technique he claimed to have invented. This work was effectively an elaboration of the use of stamped gold or silver foil paillons that had first appeared on enamelwork of the 1720s, which in turn had been influenced by slightly earlier experiments with gold foil decoration at the St-Cloud porcelain manufactory. During the early 1780s, however, there is ample evidence of its use on both porcelain and metal. Apart from the expense, the fragility of the technique when applied to porcelain was the most likely reason for its short lived favour at Sèvres and other manufactories. Its more durable character when used on enamelled metal, however, ensured a longer period of popularity among watchcase and snuff box makers, initially in France and later in Geneva, where it was extensively used.