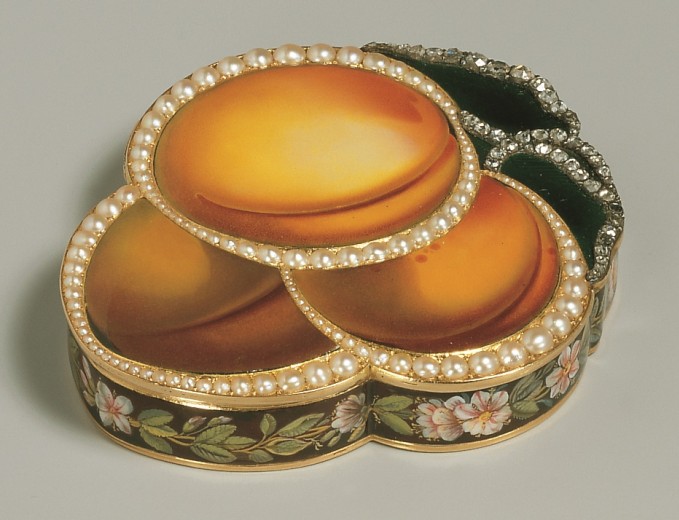 The choice of subject for this Swiss export snuff box was judicious as in China, the intended market, the peach was an auspicious object. Frequently pieces destined for the Ottoman and Chinese markets were made in pairs. Another almost identical snuff box, possibly its companion, is engraved on the interior “Yuen-Ming-Yuen | or the | Round and brilliant garden | Pekin | October 7th 1860”. Yuanming yuan was an imperial summer resort outside Beijing where the Qianlong emperor had built palaces and water-gardens in European taste. It was used as a repository for the many treasures sent as tribute or presented to the emperor by the European powers. François Bourgeois, who visited the palace in 1786, observed: ‘It is unbelievable how rich this sovereign is in curiosities and magnificent objects of all kinds from the occident.’ Although this box slightly postdates the reign of Qianlong, it is a generic example of the sort of fantasy object made for the Chinese market that continued to be supplied for several more decades. In 1860, during the second Opium War, the Yuanming yuan was razed to the ground and its treasures, as the inscription suggests, dispersed.