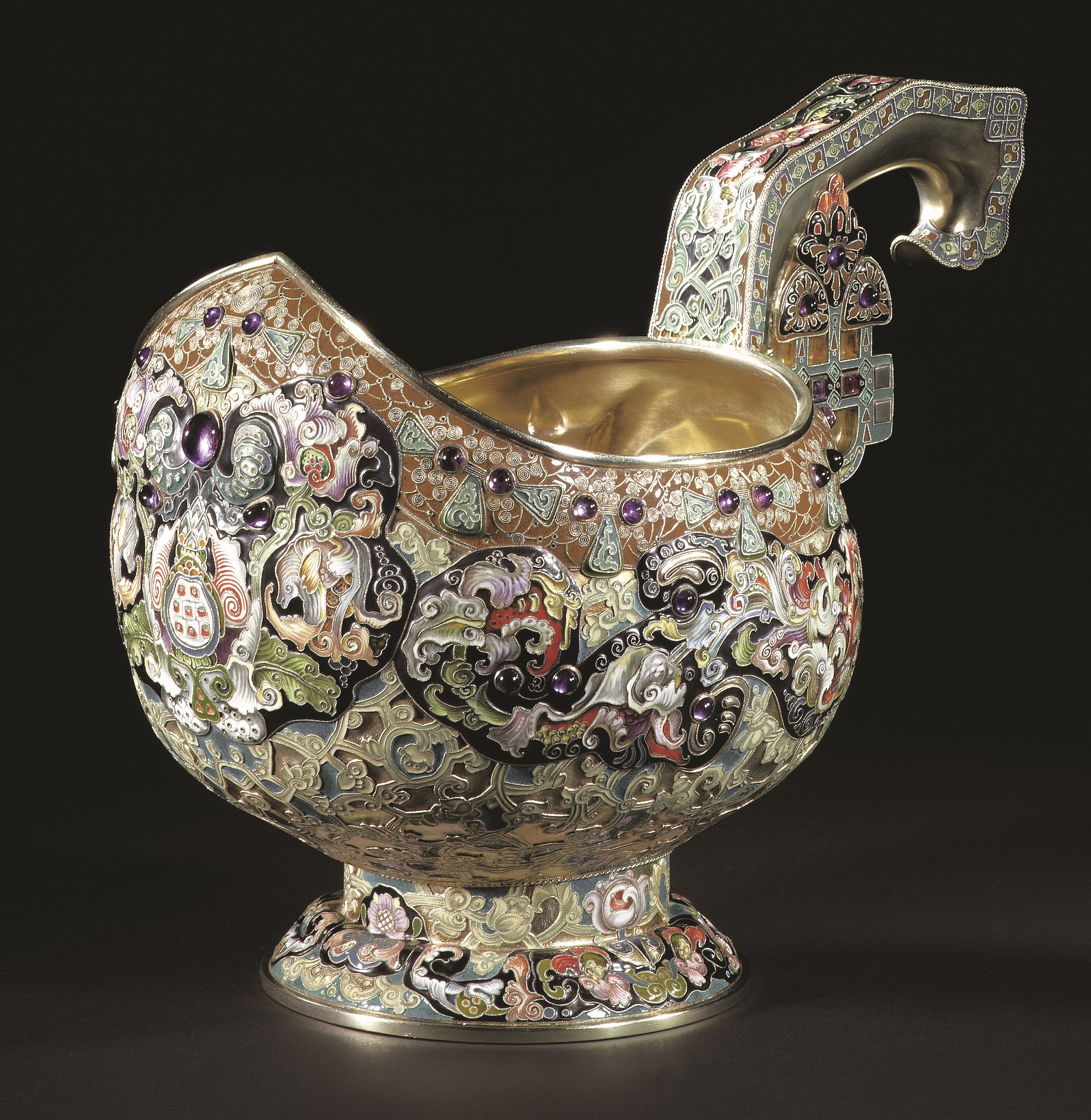 The kovsh is contained in its original fitted wood case, with a plaque engraved with facsimile signatures and the presentation inscription that translates: ‘To Ivan Olegovich Ol’sen from employees of the firm of the Nobel Brothers, May 1908’. Further, the handle of the kovsh has been applied with the Cyrillic cipher ‘IO’.

Ivan Ol’sen was the son-in-law of Ludwig Nobel. Nobel Brothers had major interests in the oil, chemicals, transport and manufacturing industries in Russia. Just prior to the Revolution they employed nearly fifty thousand people and produced a third of all Russian crude oil. One member of the family, Emanuel Nobel, was an important patron of Fabergé.

From 1887 Feodor Rückert had an arrangement with Carl Fabergé to supply filigree enamel. As it was not an exclusive contract he also sold his work to others, including Kurlyukov and Ovchinnikov in Moscow and Marshak in Kiev. Objects retailed by Fabergé bear Rückert’s maker’s mark together with the Fabergé house mark, the latter often struck almost to obliterate the former. With these went a set of scratched numerals, the inventory number used by Fabergé as a stock record. Both the marks and the scratched numerals are clearly visible on the present piece.

This kovsh marks the transition between Rückert’s earlier style, and his later work, an individual interpretation of the neo-Rusian style (see RUS 808). The form of the handle relates to traditional wooden objects, collections of which were to be seen at the influential artists’ colonies of Abramtsevo and Talashkino. At the same time the treatment of the foliate motifs has become more angular, most probably as a response to the stylisation of nature currently favoured by many exponents of European Art Nouveau. Instead of the pastel shades he had initially favoured, Rückert has developed a palette that includes black and an array of dark colours. Finally, the filigree wire is used not only to separate the different colours, but also to form spiralling roundels that perform a purely decorative purpose.