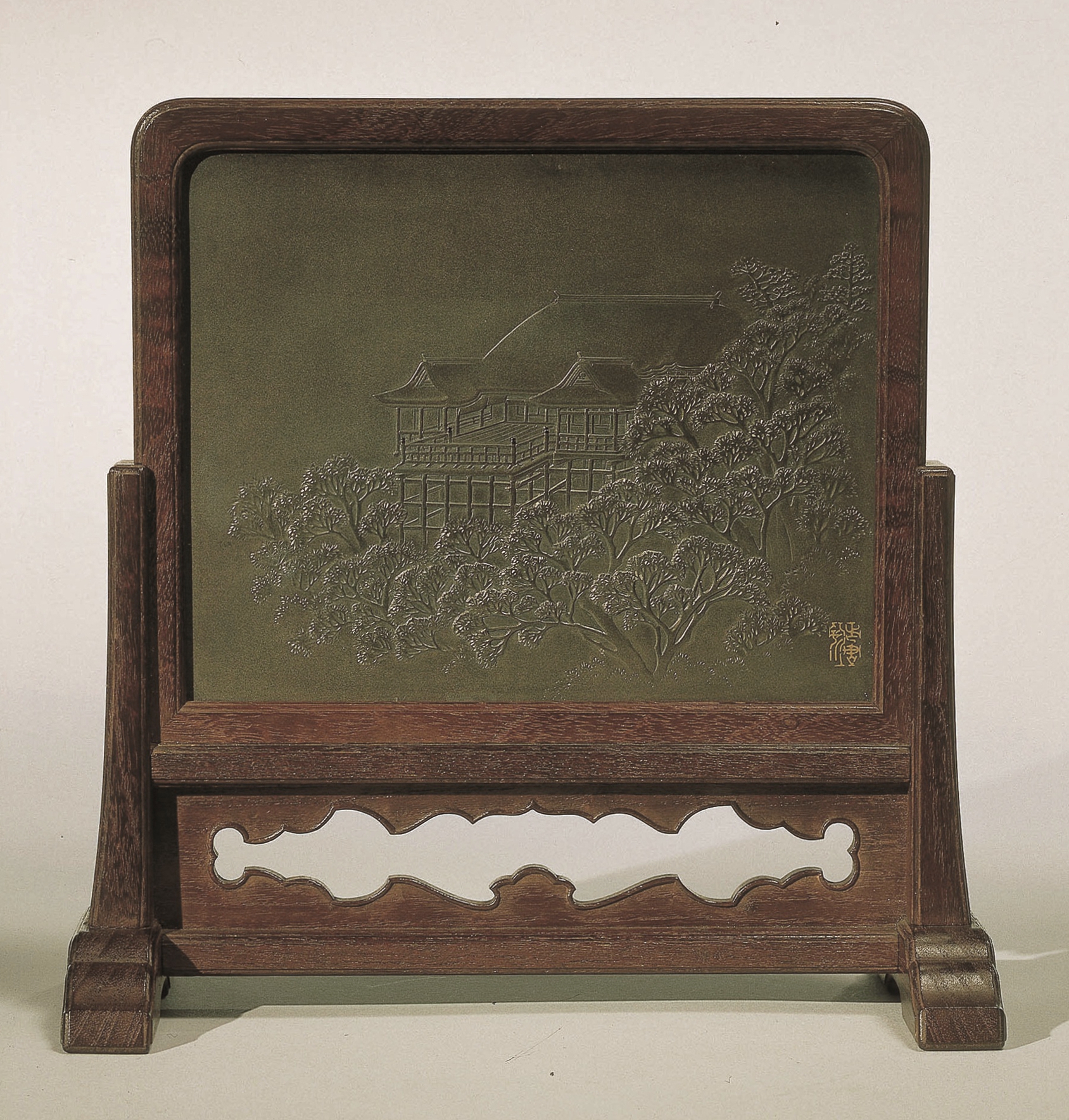 A kembyo with a shibuichi panel of rectangular form mounted in keyaki wood. The plaque with a view of the Kiyomizudera temple, partially obscured amid pine-trees worked in kebori and nikubori. Details of the fence-post caps inlaid in shakudo. The reverse lacquered in gold and silver togidashi with an egret perched on the prow of a boat by a willow amid irises, all on a roiro ground.

Kano Natsuo (1828-98) was the son of a rice merchant of the Fushimi family and was born near Kyoto. Adopted by the sword-dealer Kano Chisuke at the age of six and being given the name Kano Jisaburo, he studied metalwork first under Okumura Shohachi and then under Ikeda Takatoshi. Taking the name Toshiaki, he started his own business in Kyoto in 1846. He studied painting under the artist Nakajima Raisho of the Maruyama/Shijo school, and classical poetry. He changed his name to Natsuo at some time between 1848 and 1854; in the latter year he moved to Tokyo. In the early 1860s he was producing about fifty pieces a year. In 1869 he worked for the mint in Osaka and in 1871 was commissioned by the Imperial Household Agency to make a ceremonial tachi.

In 1877 he returned to Tokyo and fulfilled many orders for the Seikosha Company. He was a judge for the Second, Third, and Fourth National Industrial Expositions and himself won many prizes. He was appointed an Imperial Artist in 1890 and became a professor at the Tokyo Art School. He was a collector of antique sword-fittings, and wrote critical essays on contemporary metalwork. In 1895 he was given the rank of ju rokui, and in 1896 kotokan goto. He retired a year before his death.

The screen and kakemono were exhibited in ‘Meiji no choking [Metal-carving in the Meiji period]’ (Tokyo, 1987), illustrated in the catalogue published by Tabako to shio no Hakubutsukan [Tobacco Museum], pp. 40–1.