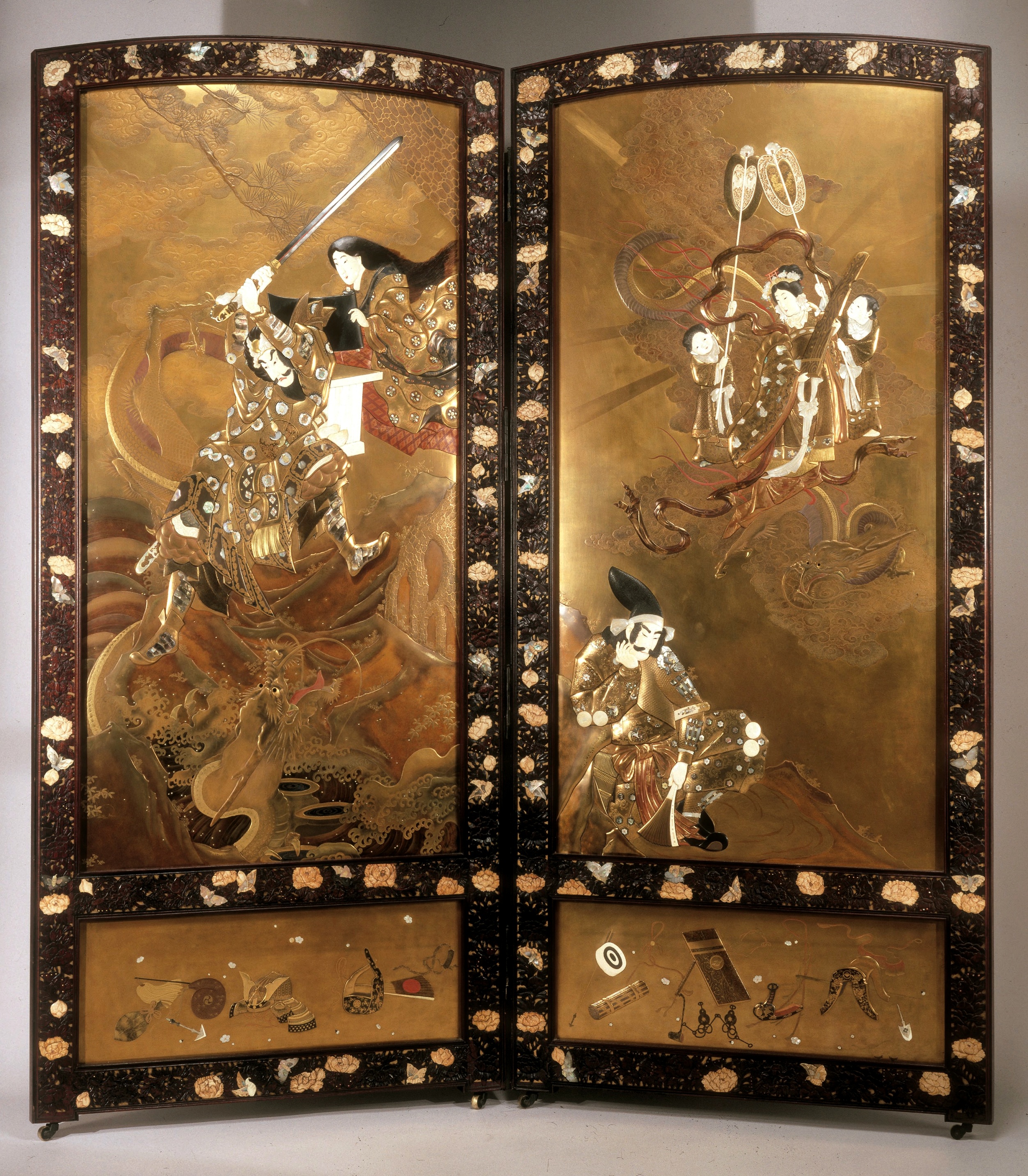 A pair of two-fold screens composed of carved wooden frames with inset lacquer panels illustrating mythological scenes. On one of the pair, the left-hand screen shows the Shinto deity Susanoo about to slay a dragon among swirling water, surrounded by sake-jars at the water’s edge. Seated behind him at a low table is his wife Kushiinadahime looking at a handscroll. The other panel portrays the goddess Benten or Benzaiten appearing to Hojo no Tokimasa (1138-1215); she holds a koto and rides on a dragon in a cloud, accompanied by two attendants bearing ceremonial fans, with the sun’s rays radiating from behind her. The panels on the second pair of screens are decorated with scenes incorporating Chinese imagery. On the left a woman holding a Chinese fan and seated in an ornamental carriage attended by a Chinese child bearing a ceremonial fan; to the side grows a flowering peony, while birds and butterflies flutter around. On the right another Chinese woman plays a koto, attended by a boy and seated at a table. The lower panels of the first of the pair of screens depict paraphernalia connected with battle and warfare, while those on the other screen are decorated with musical instruments. The screens encrusted with carved lacquered wood, incised, carved, and stained ivory, shell, hardstones, gold and silver; the lacquering executed in gold, silver, black, and red shishiaimakie, black urushie, gold and shell kirikane, enashiji, and okibirame, on a kinji ground.

The backs of the screens show a continuous design of groups of travellers winding their way through the landscape towards Mount Fuji, with souvenir and refreshment stalls in the foreground. The lower panels portray a gently rolling landscape with a distant lake and fishing-nets, in polychrome togidashie on a black lacquer ground with muranashiji. The frames surrounding the panels of openwork wood carved with floral scrolls, scattered with peonies and butterflies in bone, shell, and hardstones.

The combination of Japanese and Chinese mythology on different panels applied to the same object is seen on other examples of Shibayama-type encrustations. Although not all the imagery in the Japanese scene has been fully analysed, Susanoo is identified by the sake-jars he put in the water to intoxicate the dragon. Although of Indian origin, Benten had been thoroughly assimilated into Japanese iconography during the Edo period; in this instance her head-dress is decorated with a torii, symbolizing Shinto. This piece, almost certainly made for foreign exhibition, was reputedly purchased in 1892 from Captain Sparks and is said to have been the work of ‘Haruye’.