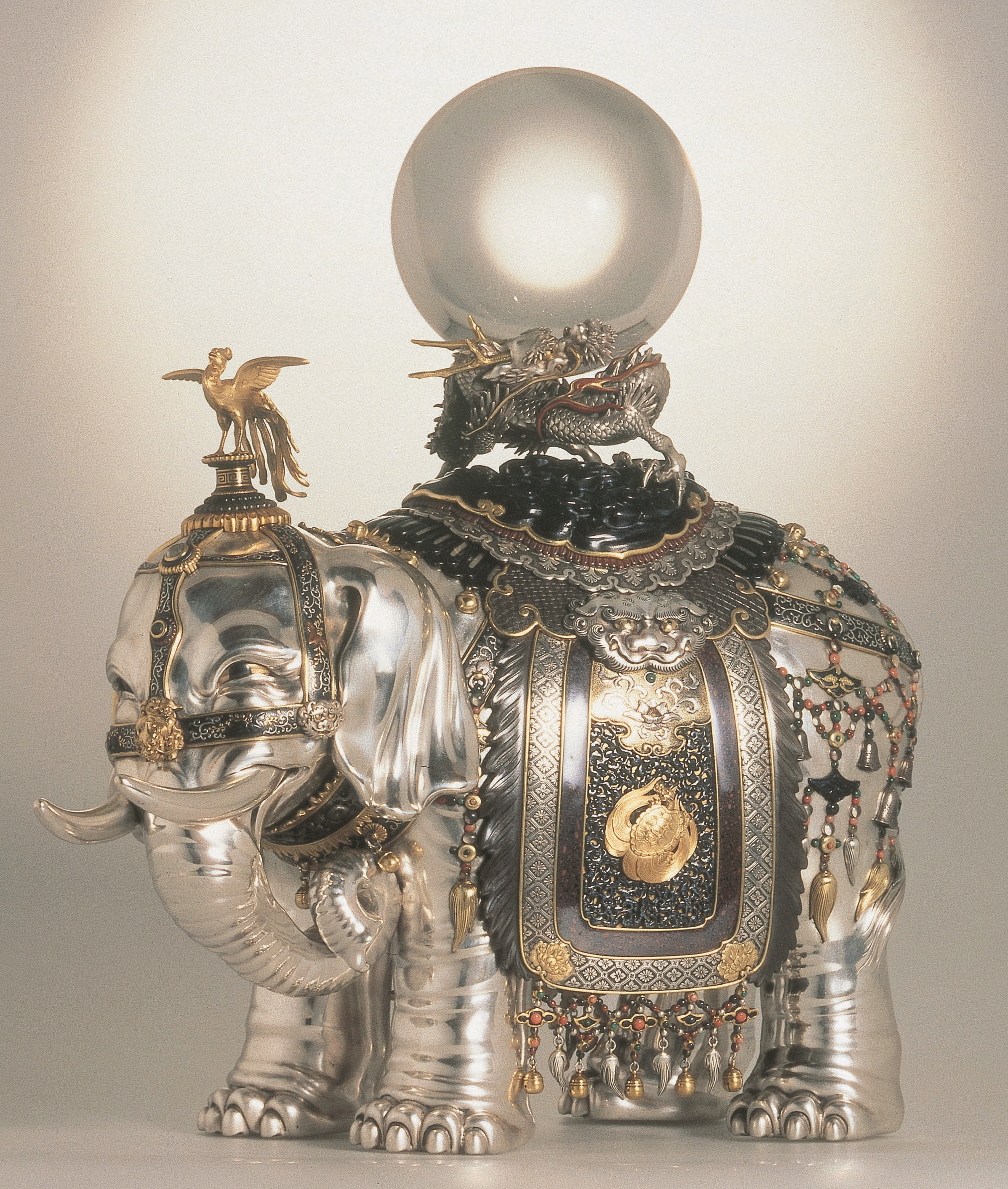 A silver koro modelled as an elaborately caparisoned elephant with a richly embellished harness comprising a bejewelled saddle-cloth bearing shishi masks and minogame, supporting a coiled dragon standing on swirling clouds holding a large rock-crystal ball. The creature’s headdress in the form of a stepped base upon which stands a gold ho-o bird with its wings spread. The whole carved and applied in shakudo, shibuichi, gold, silver, and a shakudo-copper mokume alloy. Details of the caparison are inlaid in rock crystal, malachite, coral, tiger’s-eye, agate, and nephrite.

It is interesting to consider the symbolism in this object, for it gives an insight into a spiritual aspect of the Japanese character at the time of the Meiji Restoraion as well as exemplifying Japanese aspirations abroad. The white elephant is an animal of great significance in Buddhism. It is the mount of the Bodhisattva Fugen, while his brother bodhisattva rides a lion-like beast called a shishi. They are the bodhisattvas of wisdom and are said to have been born during the lifetime of the historical Buddha. The elephant was one of the animals present at the death and final enlightenment of the Buddha.

The elephant has a saddle in the form of a lotus, which, being symbolic of rebirth, is the throne for all holy beings in Buddhism. On the throne is a cloud upon which rides a coiled dragon, a messenger of Buddhism representing almighty power. The cloud signifies that the dragon exists in a realm beyond the heavens. The dragon supports a crystal ball, which in popular legend represents a jewel that controls the tides. In this case the crystal, by its clarity and brightness, represents the essence of Buddha’s teaching, and it is thus a replacement for the bodhisattva who usually rides the elephant. The saddle-cloth bears faces of the shishi, which guards holy beings and whose roar expresses the power of Buddha’s law. Below the shishi are, on one side, the minogame, turtles trailing waterweed behind them, and on the other a crane, both symbolizing longevity and associated with Chinese immortals. The stylized scrolling on the caparison can carry either lotus flowers or the flowers of the Bo-tree, under which the Buddha became enlightened. The phoenix forming a crown on the head of the elephant is the most auspicious of creatures, flying through the realm of Buddhism and representing the joy of Buddha’s law. Stylized magic coats from among the auspicious objects associated with the Seven Deities of Fortune hang from the caparison and alternate with bells along the bottom edge of the saddle-cloth. The ringing of bells is to dispel illusion, and represents the spiritual awakening of Buddhism. Thus, the elephant is a messenger of Buddhist wisdom.