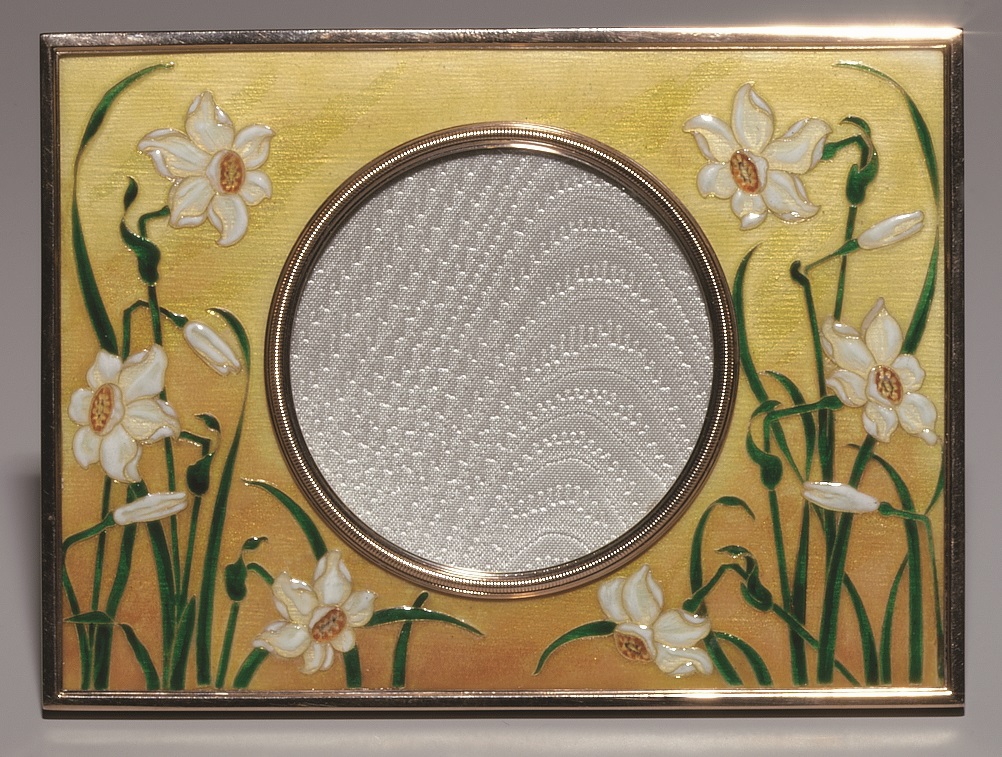 Mikhail Evanpievich Perkhin (1860-1903) worked as a journeyman under Erik Kollin, before qualifying as a master and opening a workshop in 1884. Two years later he replaced Kollin as Fabergé’s head workmaster. This rapid promotion was, according to Franz Birbaum, because “his personality combined a tremendous capacity for work, profound knowledge of his craft and persistence in solving certain technical problems”. Not only did Perkhin have a close understanding with Carl Fabergé and his creative younger brother, Agathon, who had joined the firm in 1882, but he also attracted skilled assistants who worked enthusiastically under his direction. In the ensuing years, until his suicide, brought on by pressure of work, Perkhin created many of the innovative fancy objects that helped to establish and define the firm’s reputation.

The technique of enamelling in low relief within fine wire cloisons, used here for the narcissi, must have been inspired by Japanese moriage enamel. Although not recorded as having been exhibited anywhere until 1903, the technique had been practiced in Japan prior to that date. Carl Fabergé, always quick to assimilate sources that could prove useful to his art, may have seen examples of moriage at the shop ‘Japan’ located on Nevsky Prospect in St. Petersburg. That he was aware of, and interested in, Japanese art is borne out by his substantial collection of netsuke, regularly cited as a major source of inspiration for the firm’s hardstone carvings of animals and birds. Fabergé objects decorated with this innovative technique appear to have been the exclusive monopoly of the workshops of Mikhail Perkhin and Viktor Aarne. Furthermore, production seems to have been limited to a brief period between 1899, defined by the kokoshnik mark introduced in January that year, and 1904, when Viktor Aarne retired to Finland – Perkhin having died the previous year.