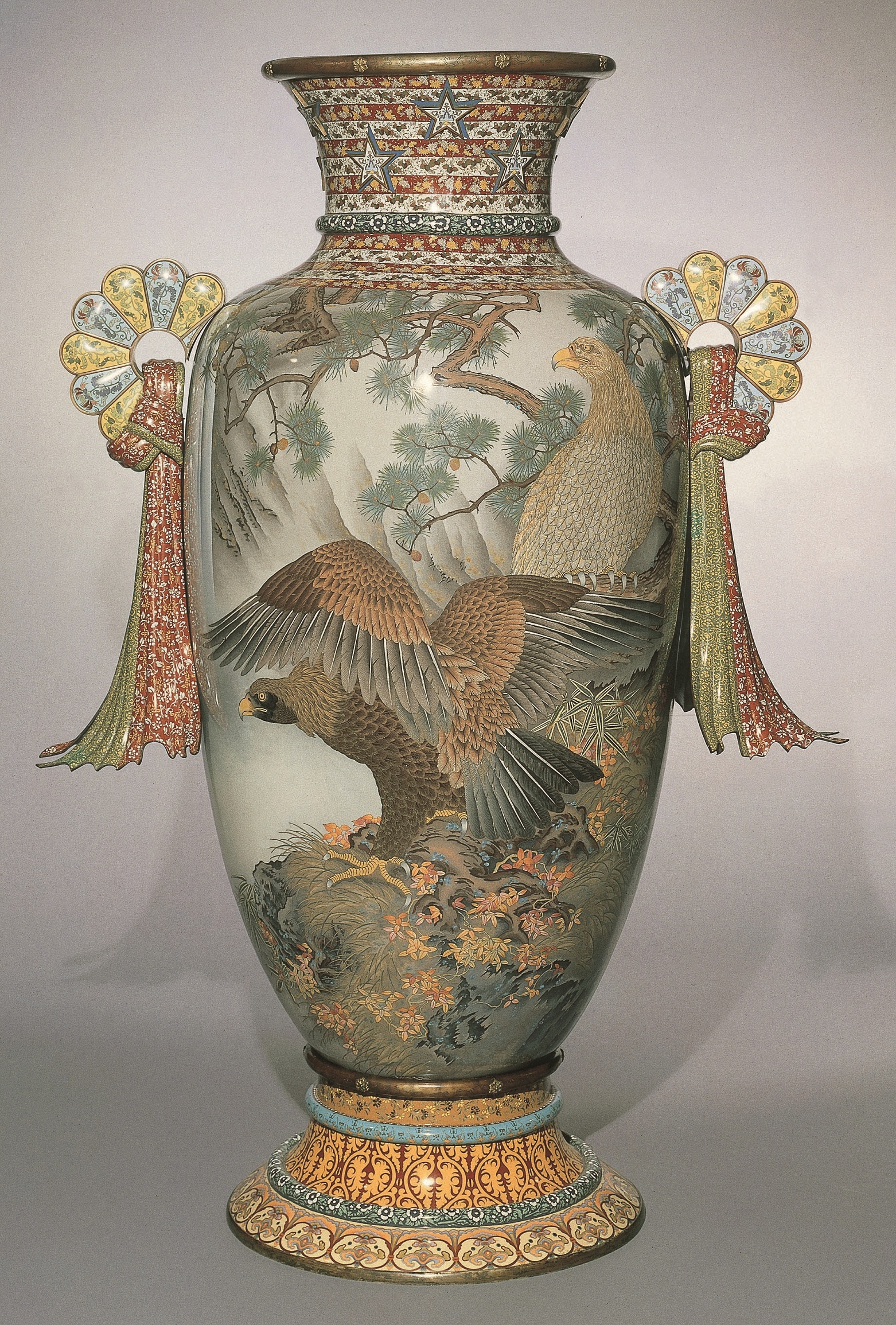 A massive cloisonné enamel vase, with a pale grey ovoid body worked in silver wire with two eagles, one perched on a pine-branch, the other below, on a rocky ledge scattered with grasses, bamboo, and autumn leaves. The reverse with birds flying above turbulent water beneath branches of pine laden with snow. The neck decorated with alternate red and white bands of chrysanthemums and paulownia, the upper part with applied stars. The sides fitted with chrysanthemum-form handles hung with patterned swags of simulated drapery. The base decorated with formal foliate motifs.

The vase originally formed part of a three-piece garniture made for the World’s Columbian Exposition in Chicago, 1893. In the catalogue as entry 375 on pp. 392 and 393, the vases of the garniture are described as being eight feet, eight inches (264 cm) tall, ‘the largest examples of Cloisonné enamel ever made’. The construction of this vase suggests that there is a section missing between the main body of the vase and its foot, though this might not account for the great difference in size noted here. It seems probably that the carved wooden pedestals, as described in the catalogue, were included in the measurement.

The catalogue is at pains to explain the iconography, and to credit the artists: ‘The designs on the vases were the idea of Mr. Shin Shinwoda, Special Counsellor for Arts of the Japanese Commission to the World’s Columbian Exposition. Their manufacture was undertaken by Mr. Shirozayemon Suzuki, of yokohama, with the co-operation of Mr. Seizayemon Tsunekawa, at Nagoya. The original design was painted by Mr. Kanpo Araki, of Tokyo, and the black ink sketch on the copper was made by Kiosai Oda, of Nagoya. The men directly in charge of making the vases were Gisaburo Tsukamoto and Kihio ye Hayashi, of Toshima… The bronze American eagle [on the censer] was made by Yukimune Sugiura, of Tokyo. The general design represents the seasons of the year… and the two eagles, autumn; while on the reverse… a winter scene is portrayed. The same design also symbolizes three virtues – wisdom, honesty and strength, symbolised respectively, by the dragon, chickens and eagles. Another idea conveyed by the front design is, that the dragon typifies China; the two eagles, Russia; the group of chickens, the Corean Islands, and the rising sun, the Empire of Japan; while the bronze eagle of the cover of the censer is the American eagle. The silver stars inlaid on the horizontal red and white stripes… are emblematic of the American stars and stripes…

Shin Shinwoda (Shioda Shin) is recorded as responsible, as ‘the well known art designer’, for the concept of the pair of screens by Ando Jubei exhibited at the Liège Exposition in 1905 and subsequently offered for sale in London at Auction (see E 40).

Kanpo Araki (Araki Kampo, 1831-1915), who made the original design, was a celebrated Nihonga artist, a member of the Art Committee of the Imperial Household (and of the Royal Society of Arts in London). With Watanabe Seitei, he was to be among the artists who provided sketches for Namikawa Sosuke for the plaques for the Akasaka Detached Palace in 1906-7.

The description quoted above gives a remarkable insight into the care devoted to the design of exhibition wares by the Japanese authorities. It also makes clear the number of artists and master craftsmen, to say nothing of the skilled workers, involved in the making of such a piece. See also EX 439.