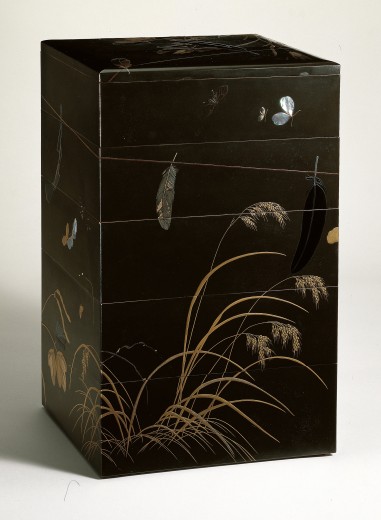 A five-tiered jubako with two lids, decorated with harvest motifs: susuki, millet, rice, oats, barley, and adzuki plants with long pods of beans. Thin bamboo canes support a loose string hung with naruko (bird-scarers), while a tauter line is adorned with bird feathers and gohei (paper offerings to the gods). Tiny butterflies hover overhead. The spare lid decorated with susuki and another bird-scarer. These designs executed in gold, silver, and black hiramakie and takamakie, with details in shell, kirikane, ivory, gold, and silver, seed pearls, harigaki, ishime, kakiwari, keuchi, and kuromakie, on a seidonuri ground. The interiors of nahiji on a black ground.

Goke (Bakumatsu kaikaki no shikko kaiga, Nos. 7-13) reproduces four more jubako by Shibata Zeshin and lists documentary evidence, based on the catalogues of exhibitions held in 1889 and 1940, for the existence of a further fifteen. This one, not reproduced by Goke, is almost certainly the second in his list, described as a ‘five-tiered box with a substitute lid and makie design of the five cereals’. The present jubako is another of the major works of Zeshin owned by the Yoshiie family (see GL 1), a provenance based on a paper label on the outer box indicating that this was number 236 in their inventory.