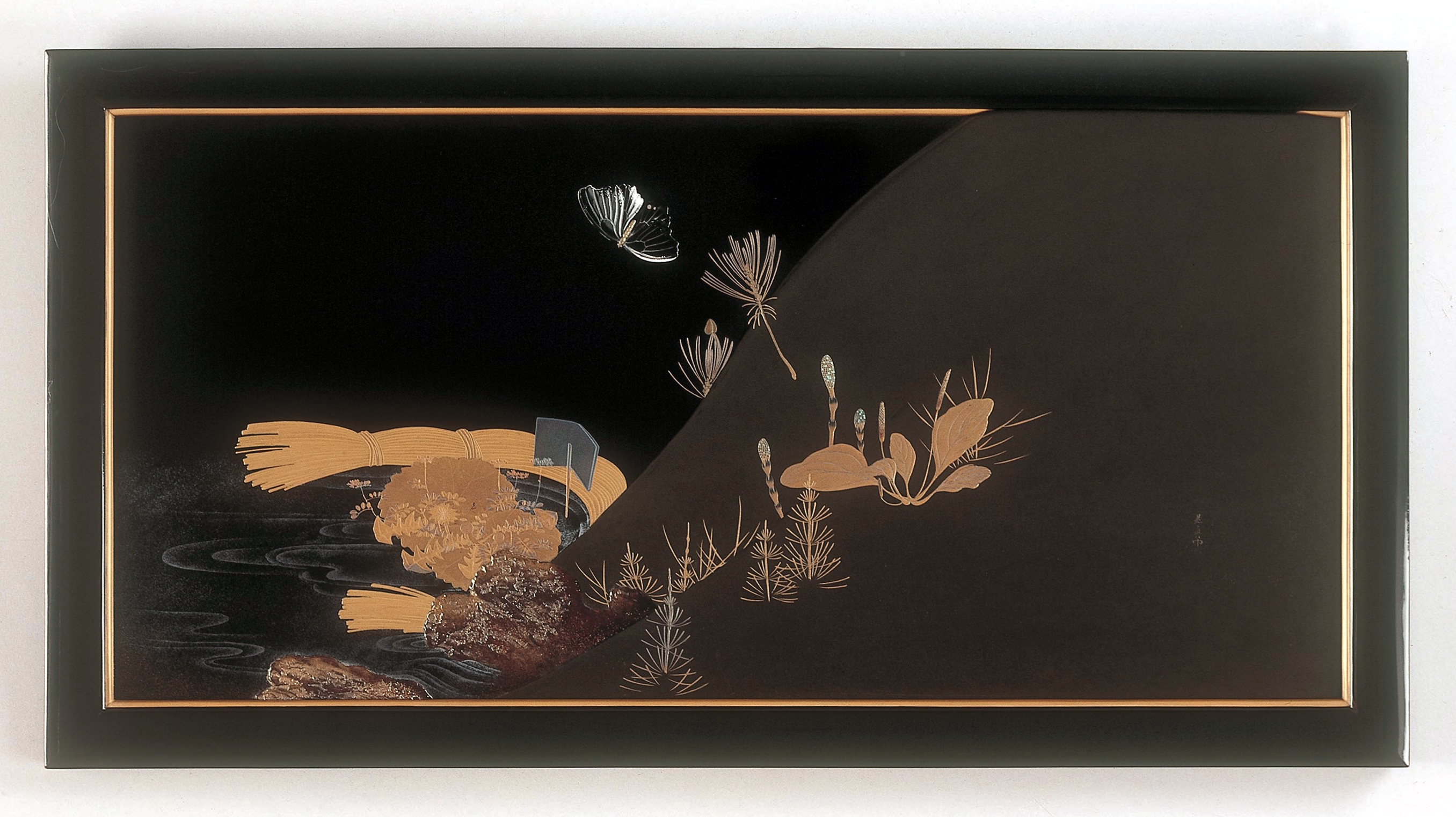 A framed panel showing a butterfly swooping down over the rounded curve of a bank where mare’s tail and plantain grow. Below, two huge butterbur leaves and a paper offering held in a bamboo pole protected from the swirling eddies of an irrigation canal by a bundle of rice straw. Vetch and dandelion leaves and flowers strewn on the butterbur leaves. The decoration in gold and silver hiramakie, takamakie, and togidashie, with details in shell placed in okibirame fashion, kuromakie, and other makie techniques, of roiro and seidonuri grounds. The butterfly of copper, gold, silver and shakudo with shell details, its wings attached to the panel by a hinge.

Inscriptions on the storage-box read Makie minakuchi matsuri no zu [Makie panel with designs of the minakuchi] and Oju Sasaki Masashi-haku Meiji jugo aki kugatsu chujun toki toshi nanajuroku-o Koma Zeshin kore wo seisu [Made to the order of Count Sasaki Masashi by the venerable Koma Zeshin, aged seventy-six, in autumn in the middle of the ninth month of the fifteenth year of Meiji (1882)], with a seal Chiku.

The certificate reads: Zeshin-o saku minakuchi makie suzuribako shinsaku mugi mono nari Showa hachinen sangatsu itsuka hachiju-o Chikushin kan [Makie panel with designs of the minakuchi ceremony by the venerable Zeshin. This is without doubt a genuine piece. Examined by Chikushin, and old man aged eighty, on the fifteenth day of the third month of the eighth year of Showa (1933)], with a seal Chikushin Yukei [Respectfully, Chikushin]. This certificate enables us to place Chikushin’s birth around the year 1854.

A paper label attached to the storage-box explains the background to the design: ‘An explanation of the minakuchi ceremony. In the Yamato region, before they plant out the rice seedlings in the paddies they cut gaps in the banks around the fields to let the water in. Then they float butterbur leaves into these gaps and load them with plants such as vetch and dandelion as an offering to the god of the place. For this reason the festival is called minakuchi [water-mouth]. I don’t know if the custom survives to the present day. Matsudaira (Motokata) says: “According to the venerable Zeshin, The festival varies from place to place. In this case he based his design on the practice of making a bundle of rice straw, bending it over and putting it in the water. Folded paper is fixed in a bamboo pole to serve as a Shinto offering and a little unhulled rice is placed on a butterbur leaf. Zeshin explained this when lecturing in the lacquer section of the [Tokyo] Exhibition for the Promotion of Craft Objects in 1887 and I took a note of what he said. Matsutsubo Motokata.”’

Zeshin’s involvement in the 1887 exhibition is confirmed by Umezawa, Shibaba Zeshin ichidai yoki, and we know from other sourced cited in Goke, Bakumatsu kaikaki no shikko kaiga, p. 224, that he exhibited a ryoshibako and two paintings on that occasion. However, it is not recorded that he exhibited a panel. This panel was shown at the exhibition held at the end of 1907 to mark the seventeenth anniversary of Zeshin’s death and later reproduced in the second volume of the commemorative catalogue, edited by Zeshin’s son Reisai and published in 1912 (Shibata, Zeshin-o gakan zokuhen). It is accompanied by a bidding-slip, receipt, and envelope revealing that it was sold on 25 December 1931 to the Yoshiie family of Ushigome-ku, Ichigaya, Nakanocho 38, Tokyo for 2,690 yen by Motoyama Hojitsu of Motoyama Yukodo, Shiba-ku, Shiba Koen, Tokyo; it was previously lot 76 in a sale held on 12-15 December 1931 at Shinjoji, Niigata City, Nishibori-dori, 2-bancho. The sale consisted entirely of pieces owned by the Sasaki family of Nakakambara-gun, Hayadori-mura, in central Niigata prefecture. As well as this piece, the Yoshiie family owned GL 9 in the present collection. Zeshin had close links with two other wealthy merchant families from Niigata, the Shirose and the Oshiki. The latter lived in Nakakambara and owned several pieces by Zeshin which were sold at another auction in 1926.

Osaka Municipal Art Museum, Kogeikatachi no Meiji ishin, No. 79, illustrated a similar panel by Zeshin with a design of butterbur leaves and small birds, dating from 1877, in the Ishikawa Prefectural Museum of Art. It is about the same size as the present example and is more restrained in style than the larger panels Zeshin decorated for domestic and international exhibitions.