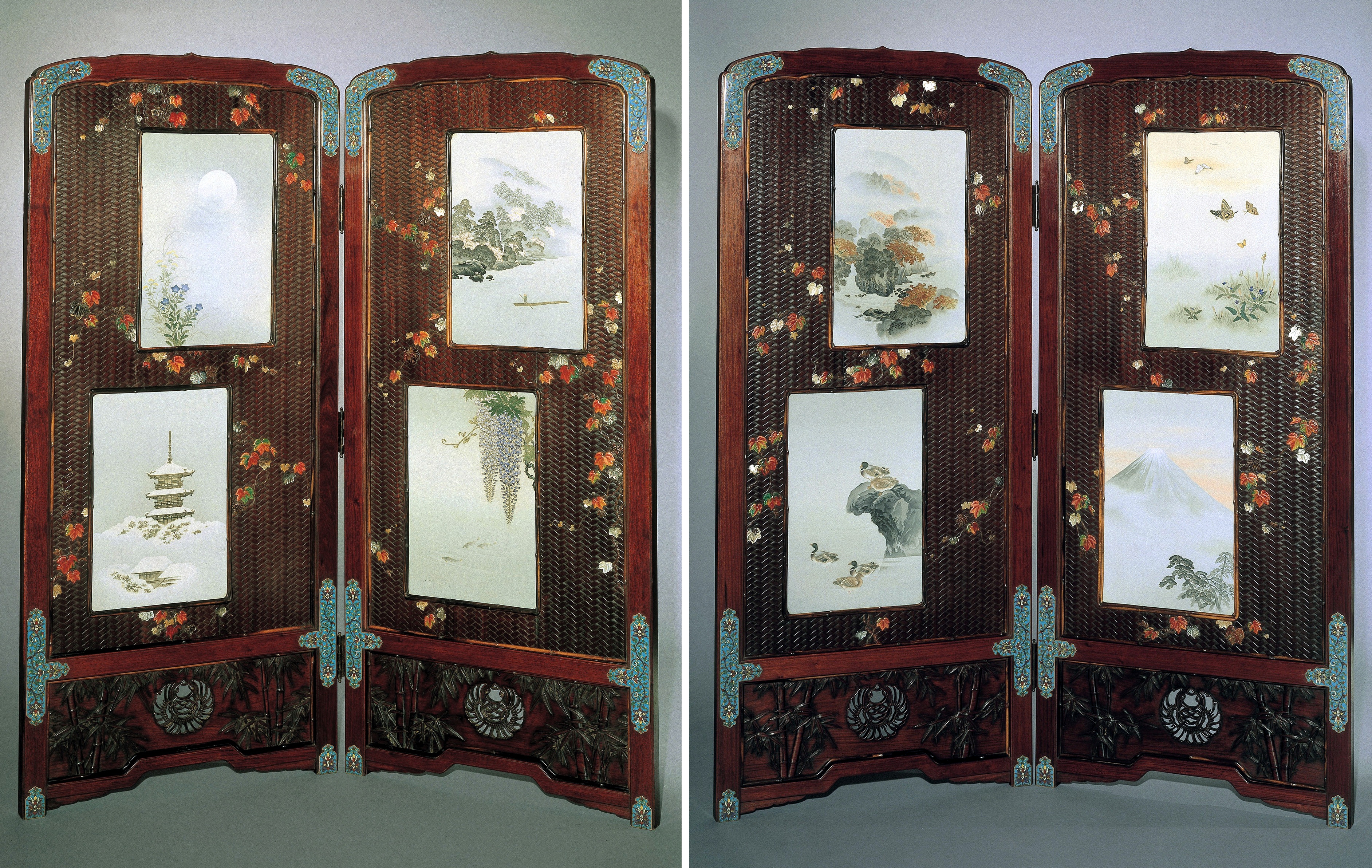 A pair of cloisonné enamel-inset, wooden two-fold screens each containing four rectangular panels, the group representing the four seasons. Each panel worked in musen and yusen and mounted in a teak simulated-basketwork panel and a coromandel-wood simulated-bamboo border applied with trailing vine. On one screen the panels depict a partially cloud-obscured sun above stems of autumn grasses, a snow-covered pagoda above snow-laden trees, a log raft on a river beneath pine – and cherry-trees in mist, and fish swimming beneath blue and white wisteria. On the other the panels decorated with butterflies above wild flowers, a winter view of snow-capped Mount Fuji, a turbulent stream flowing between rocks and autumnal maple-trees, and duck on a rock above others swimming on water. The teak panels decorated with trailing vine worked in flambé transparent enamelled copper, pearl-shell, lacquer, and lacquered pearl-shell vine-leaves. The reverse of each panel a single piece of mulberry-wood applied with ivory egrets in flight, perched on a gnarled stump or on a willow-branch. The leaves and branches worked in gold and coloured takamakie and hiramakie, and inset with aogai. With two lower mahogany panels pierced and carved with stylized sparrows and bamboo. The teak frame applied with cloisonné enamel mounts in the Chinese style.

These magnificent screens were made by the Ando company for the Liège Universal and International Exposition of 1905, where the Ando name-plate and trademark were placed on the exhibition stand and are visible in a photograph in the catalogue.

They were offered for sale at an auction held by Robinson and Fisher in Willis’s Rooms in London on 5 December 1905, where they were fully described and illustrated as: ‘500: a Magnificent Two-fold Screen, framed of teakwood, with cloisonné ornaments in joints, wire and wireless cloisonné panels, representing four Seasons, are fitted on one-piece Mulberry, which is thoroughly carved and tastefully inlaid with ivy leaves of mother-of-pearl. This grand specimen, which took the artist over five years for its completion, was designed by the well-known art designer, Shioda, and the pictures in panels were specially drawn by eight celebrated artists of today. 501: The companion screen.’

Whether the two screens were actually separated in 1905 is not certain; they certainly were so by 1987, when one of the pair was exhibited in Los Angeles at the County Museum of Art (attributed to Namikawa Sosuke). They are here reunited.

There is no indication on the screens as to the identity of the ‘eight celebrated artists of today’. The ‘well known art designer, Shioda’ is Shioda Shin, an influential figure in the enamel industry, who had been a consultant on arts and crafts for Aichi Prefecture. It was at Shioda’s house that the first meetings were held of the group of artists who executed the planning for the Japanese exhibits at the Vienna exhibition of 1873, and who later (1887) formed the Nihon bijutsu kyokai (Japanese Art Society). It was this society which promoted the Court Artist system.