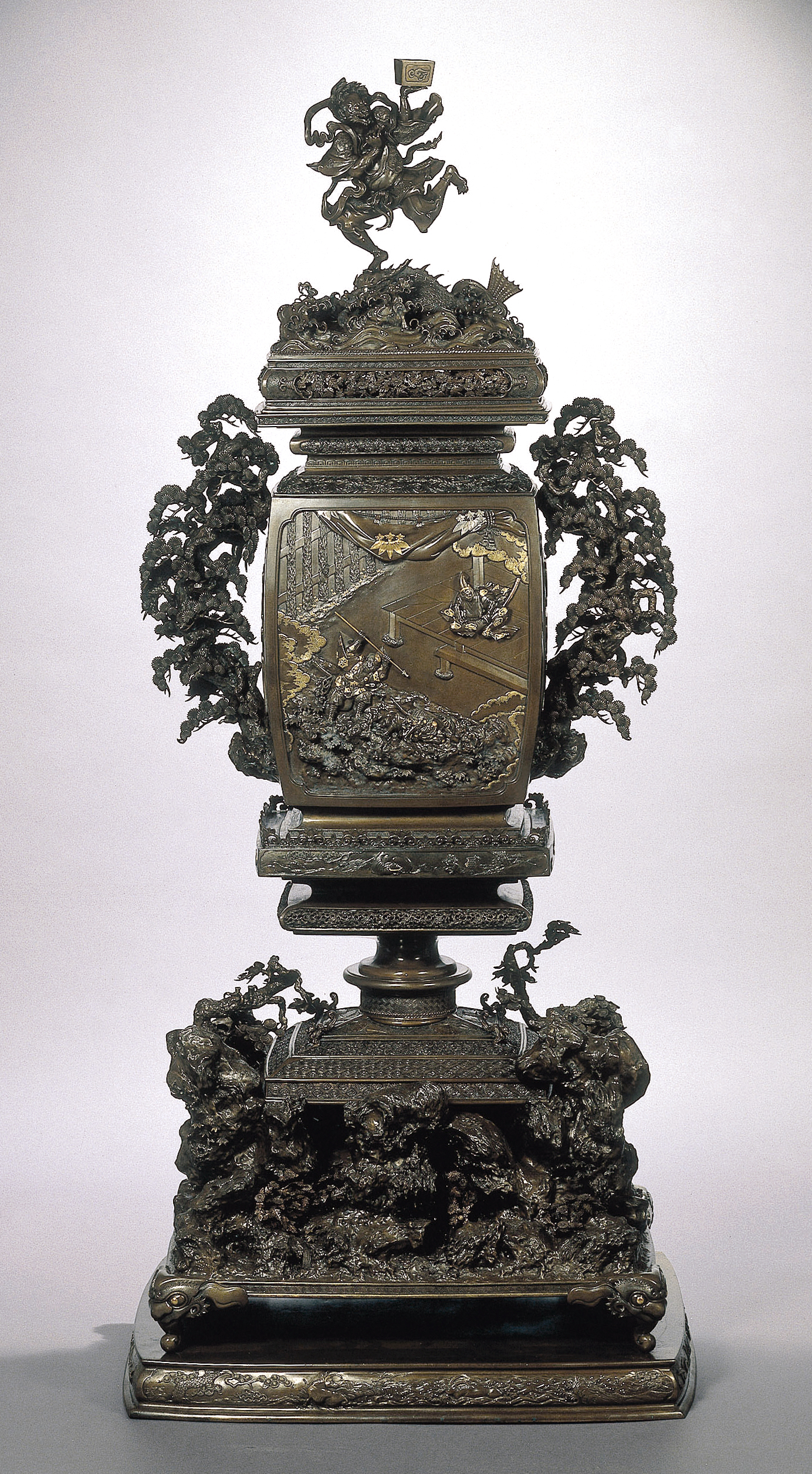 bronze, with decorations in gilt, silver, shibuichi and shakudo

When the Meiji government first began to participate in international expositions during the 1870s, bronzes similar to the one illustrated here made an immediate and profound impression on foreign observers and attracted much favourable comment. The extraordinary complex decoration of this piece includes a number of motifs from Japanese illustrated books, combined with intricate low-relief ornament to produce a rich and exotic effect designed to appeal to foreign taste.

The design on one side of the main body shows an old man holding a staff and a bell, standing on one side of a stream, being approached by Kanamari Daisuke, a retainer of Satomi Yoshizane, on the other side of the stream. The same motif is seen on a contemporary bronze by a different artist in the collection of the Walters Art Gallery, Baltimore (inv. No. 54.1617), whose reverse shows a woman with a dog and a boy riding an ox, suggesting a scene from Hakkenden (The Tale of Eight Dogs), a novel by Takiwaza Bakin published in 106 volumes between 1814 and 1841. In the early part of the novel, Satomi Yoshizane, besieged in his castle, jokingly promises to present his daughter, Fusehime, in marriage to Yatsufusa, the family dog, if only it will kill his enemy. The dog duly carries out its master’s wishes and Fusehime does indeed marry Yatsufusa, later dying as she gives birth to eight crystal beads which are eventually incarnated into eight human sons, each with the word for ‘dog’ in his name. The episode between Kanamari and the old man, in fact a bodhisattva, follows Fusehime’s death.

The lively finial, probably copied from the frontpiece to a much later volume of Hakkenden, takes the form of the Chinese stellar god Kui Xing (in Japanese, Kaisei), in his customary pose with his left leg kicked upwards and outwards. His right hand holds a brush, in allusion to his association with the Chinese God of Literature Wen Zhang (in Japanese, Bunsho). The other side of the main panel derives from a much earlier, unrelated picture-book, Tachibana Morikuni’s Ehon shaho bukuro (The Hold-all of Sketching Treasures), first published in 1720, and shows a celebrated episode from the tale of the tragic hero Minamoto no Yoshitsune (1159-89). While in flight from his jealous half-brother Yoritomo, Yoshitsune and his faithful companion, the monk Benkei, both of them disguised as monks on a fundraising tour, attempt to cross a checkpoint manned by Yoritomo’s henchman Togashi Saemon. When Benkei tries to prove the authenticity of his mission by pretending to read aloud from a subscription list, Yoshitsune bursts out laughing, forcing Benkei to put on a show of anger and chastise his master.