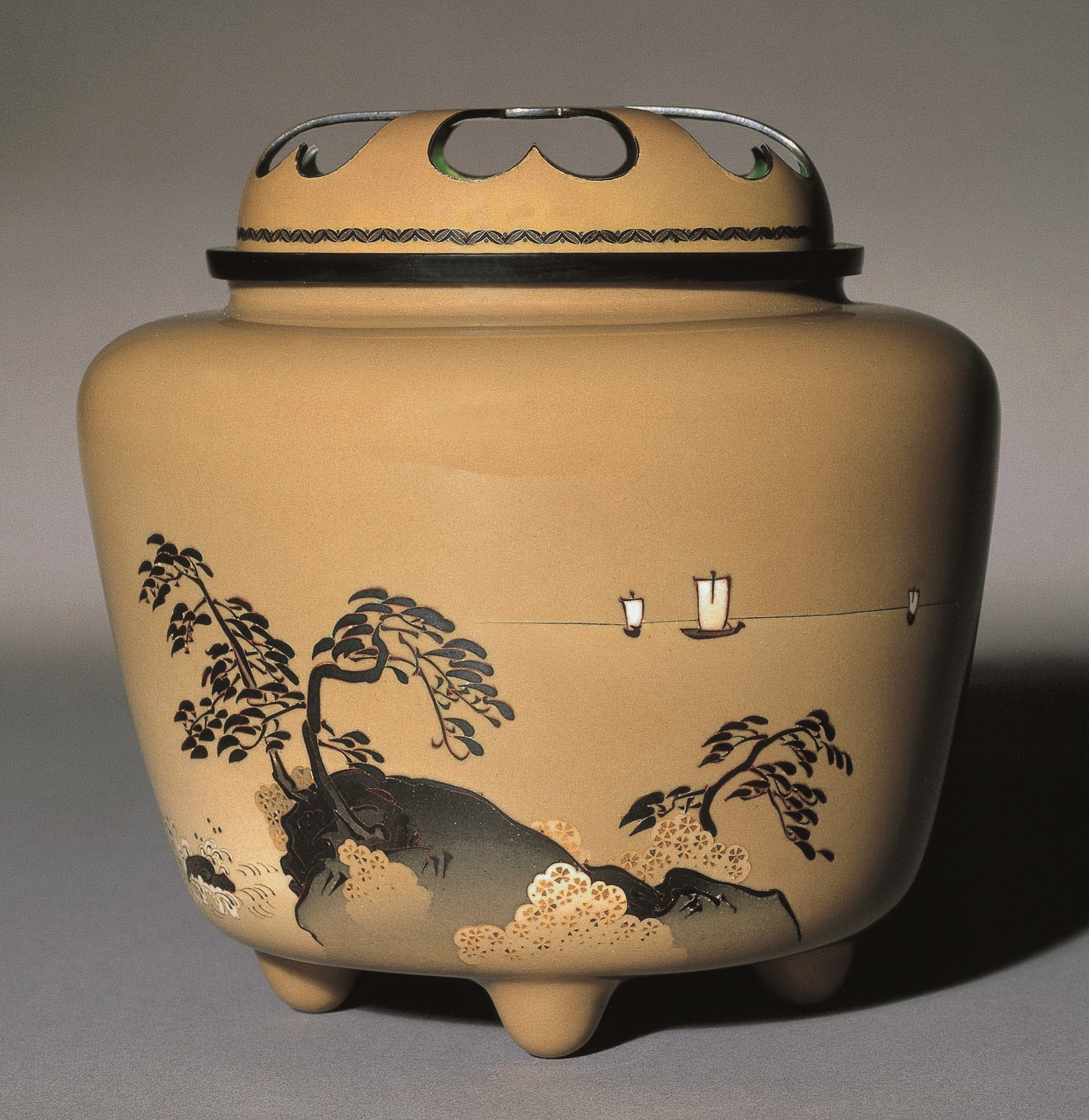 A cloisonné enamel koro and cover worked in shakudo, silver, and gold with pine-trees and flowering bushes before a lake, with sailing-boats in the distance, on a graduated pale brown ground. The reverse with pine trees on rocky islets in a slight mist. The trees in sculpted shakudo with some small use of dark grey enamels, the foliage entirely in shakudo. The bushes outlined in gold wire and the five-petalled flowers worked in triangles of gold. The rocks in graduated grey enamel. The body raised on four rounded integral feet. The lid pierced as a five-petalled flower in plain brown enamel. Applied with a shakudo rim.

This masterly koro, with its bravura effects subtly understated and very late in Namikawa Yasuyuki’s œuvre, seems a summary of all he has learnt and achieved in the previous thirty-odd years.

The shape of the koro, with the four bulbous feet beaten out of the copper of the body, is a variation of a three-footed design illustrated in the kyo shippo monyo shu, p.40. The total absence of any metal amount at the base is a new departure for Namikawa Yasuyuki.

A somewhat similar koro, illustrated in Suzuki and Sakakibara, Nihon no shippo, No. 182, was made by Yasuyuki in 1912. All the Court Artists were engaged, each in their own metier, on a work to be presented to the Emperor Meiji on his sixty-first birthday, as a token of appreciation for the encouragement he had so consistently given to the arts. The presentation was to have been on 3 November 1912, but was cancelled owing to the Emperor’s untimely death. The works were, however, completed and presented in the Emperor’s memory to his successor, eventually finding their way into the Imperial Household Museum.

The piercing of the cover reveals no added rim of metal around the petal shapes, nor any border; there is a border around the circumference of the cover, but not at the edge of the enamel surface. This border is of a very narrow cash pattern; Namikawa Yasuyuki is demonstrating the advance he had obtained earlier - that of being able to do away with any strengthening edge – by using the same motif he had usually used for such edges, but here for a border that is only decorative. The cover is probably made of silver.

This form of signature, a seal in silver wire in the enamel, is found on other examples of this date, such as some of those in the Baur Collection, Geneva.