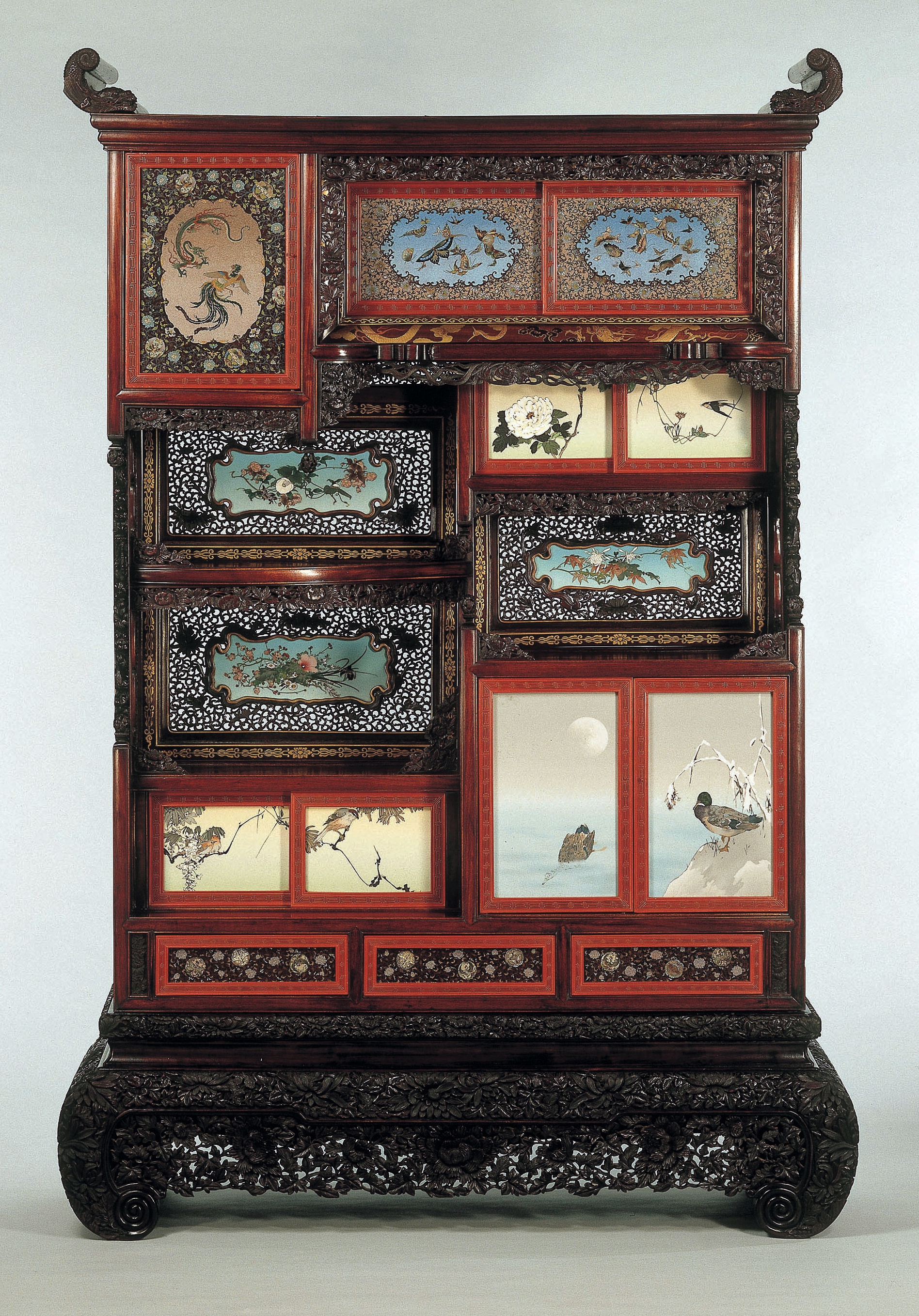 A hardwood and cloisonné enamel display cabinet, with an asymmetric arrangement of hinged doors, open galleries, and sliding doors. The upper part of the upper section with a single hinged door in cloisonné enamel worked in silver wire with a dragon confronting a phoenix in a graduated mottled stone-coloured cartouche, reserved against a dark plum-coloured ground decorated with stylized butterflies, phoenix roundels, and scrolling foliage; to one side, two sliding doors decorated with numerous butterflies on a pale blue ground within a similar stone-coloured border, in the same style.

The central section with a pair of sliding doors worked in shosen with a swallow flying among morning glory and a large double white peony; the three back panels of shaped rectangular form worked in yusen with flowers on a pale blue ground. The lower part with a large pair of hinged doors worked in shosen and yusen with a duck and drake and snow-covered reeds beneath a full moon and clouds, on a graduated grey to blue ground, and a smaller pair of sliding doors with flycatchers and a shrike on trailing wisteria on a yellow-green ground, above three drawers decorated in a style similar to the border on the upper door. The doors and drawers framed in red lacquer, with some gold-lacquer decoration and profuse pierced carving of peony and phoenix.

The enamel panels on this grand piece of furniture are evidently the work of two different artists, working in wholly unrelated styles. The upper doors and the lower tier of drawers, here attributed to Honda, are in the formal style from which Namikawa Sosuke (and Namikawa Yasuyuki) had at this date broken free. The upper doors have borders of patterns unrelated to the central scene, while the other doors have no borders and are worked in styles that minimize the wire instead of emphasizing it. The doors of the central and lower sections are here attributed to Namikawa Sosuke, and it is interesting to see him working in three styles; the blue-grey-ground doors in shosen and musen are typical of his œuvre. The yellow-green-ground sliding doors are very much in the style of the Shijo artist Watanabe Seitei (1851-1918), using the scratchy, almost scribbed, wirework (see especially the peony) that apparently only Namikawa could do.