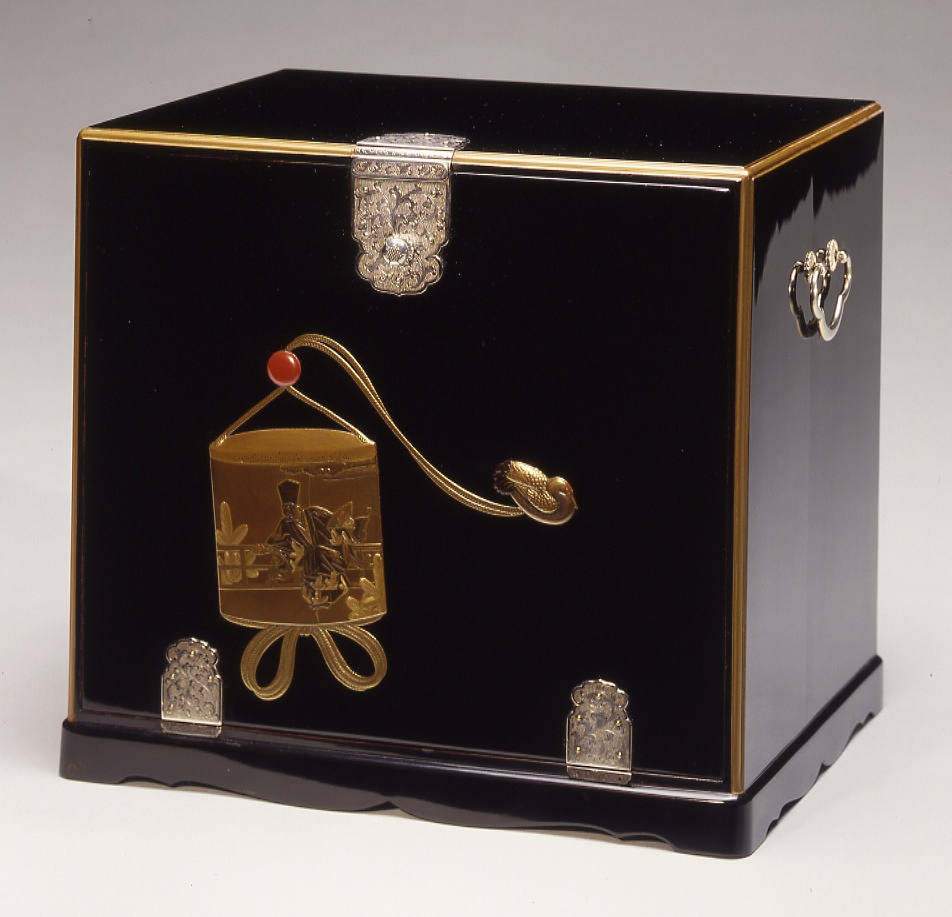 A drop-fronted cabinet with silver fittings, raised on an integral stand. The front removes to reveal four drawers, each containing a removable tray. The trays divided vertically into three sections, each holding an inro, and further divided horizontally to separate the inro from the netsuke. The front of the cabinet depicts an inro decorated with a sambaso dancer performing on a stage, with a pine in the background, complete with an ojime and a netsuke in relief in the form of a duck, in gold, black, and red hiramakie and takamakie, kinji, and inlaid hardstone on a roiro ground, with a fundame border. The drawer-fronts of roiro with fundame borders, the inner trays edged with brown lacquer.

The cabinet contains twelve inro, each representing one of the twelve animals of the Zodiac, together with a spherical ojime of amber-coloured hardstone and a manju netsuke with the corresponding animal. The inro decorated in gold, silver, and black hiramakie and takamakie, with details in red lacquer, kirikane, and nashiji on a Gyobu nashiji or kinji ground. They are listed below according to their order in the twelve-year cycle, with the main elements of their design described.

1. Rat. Rats and turnips portrayed within a circular panel.

3. Tiger. Tigers in a bamboo thicket.

4. Hare. Hares among horsetail gazing at the full moon.

5. Dragon. A dragon among stylized clouds within a circular panel.

6. Snake. Snakes on ema (votive plaques) hanging from the trunks of ginkgo trees.

7. Horse. A saddled horse tethered to a cherry tree.

9. Monkey. Monkeys on a peach tree by a waterfall.

10. Cock. A cockerel, hen, and chicks under a flowering plum tree.

The inro probably came into widespread use towards the end of the seventeenth century. With the opening up of Japan in the 1850s and the subsequent gradual adoption of Western dress during the second half of the nineteenth century, it fell from favour, but a number of inro-makers, faced with the collapse of the domestic market, turned to producing inro for the export market as collector’s items rather than functional containers. This was especially true of sets of matching inro, and the present set of twelve probably falls into this category, making it likely that they are from the hand of a later artist than Koma Kansai II (1767-1835).