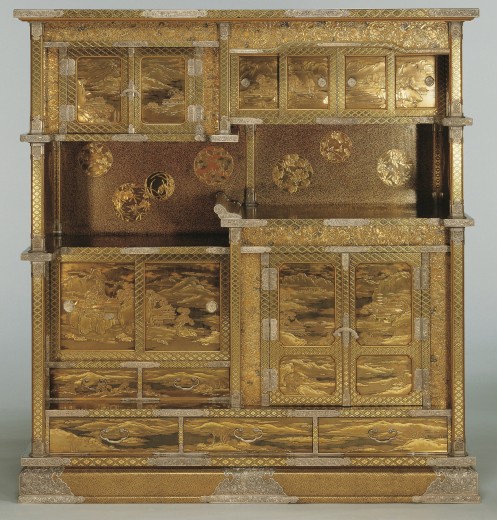 A cabinet comprising shelves, drawers, and cupboards with silver fittings. The cabinet consists of two cupboards in diagonally opposite corners, each with a pair of doors hinged at the sides and with a central opening. To one side of each cupboard additional cupboards with sliding doors, with drawers below, with staggered shelves formed by the tops of the cupboards. The fronts of the cupboards, sliding doors, and drawer-fronts decorated with landscape views in the traditional style. The insides of the doors of the smaller, upper cupboard portray a pair of confronting ho-o birds among paulownia-trees and stylized clouds. The inside of the doors of the bottom cupboard depict shishi throwing themselves down a waterfall in a rocky terrain, around which peonies grow. This larger cupboard also contains a drawer. The larger areas surrounding the doors and sliding panels embellished with a profusion of flowers in gold and silver takamakie, the thinner borders composed of the hanabishi pattern inlaid in gold foil. The base covered with a linked key-fret design. The rear panel facing the viewer, the back proper, the top and sides of the cabinet all decorated with floral roundels, most of which also contain a bird, insect, or animal appropriate to or seasonal with the plant, such as the squirrel and vine or the hare and horsetail, all on various gold-sprinkled grounds. The lacquer decoration carried out in gold and silver hiramakie and takamakie, red and black lacquer, with kirikane and inlays of shell on a black lacquer ground sprinkled with gold. The interiors of the cupboards and drawers all of nashiji.

The English translation of a letter from Baron Sumitomo dated 12 April 1922, recently discovered by chance in the archives of the Far Eastern Department of the Victoria and Albert Museum, provides us with the background to the manufacture of this most resplendent example of the classical revival style of the late Meiji and Taisho periods. The text is given here without alteration:

‘Explanation to the Offering to His Royal Highness the Prince of Wales from Baron K. Sumitomo.

The manufacture of relief lacquer wares is a complicated affair. The master mind that conceives the whole thing and not only superintends the processes but personally conducts the most important part thereof, is the makieshi. The word makie-shi means one that makes relief lacquer wares. The laying of relief lacquer in gold or silver is the most important part of the process, and is, consequently, personally attended to by the directing artist himself. But the rest of the operations are delegated to a series of artists and specialists.

Taking, for instance, the present specimen made to Baron Sumitomo’s special order, it passed through the hands of nine men besides the directing makie-shi, Komin Harui.

In the first place, the frame-work was prepared by Kenjiro Inaba, the wood used being old hinoki (Japanese cypress) of the well-known Kumado variety produced in the provinces of Owari. It was next coated with cloth, over which plain lacquer was laid in three successive operations. The surface was then carefully smoothes and polished. This part of the process was taken in hand by two specialists, Gennosuke Iwamura and Kosuke Taura.

The book-case was now ready for personal treatment by the directing artist, Komin Harui. But even here he had to call in the service of a painter to draw pictures and decorations, the artist employed for this purpose being Gokyo Miyake. In putting on gold lacquer, Komin Harui was assisted by four experts, namely Ikkyusai Matsumoto, Chosai Yoshizumi, Shunkei Kurokawa, and Shumin Shimizu.

The gold used in relief lacquer work is generally in the form of dust. But in this piece there are parts that are of gold plates inlaid. They are the patterns enclosed in tiny squares on the corner pieces. The pictures marked out in relief gold-lacquer on door-leaves represent the eight classic views in the region south of Heng-Shan in China. The inside faces of the doors bear pictures of phoenixes on paulownia trees and of peonies, lions and waterfalls. Lastly there remain metal works in silver which adorn various important places. They were made by the metal decorator, Kansuke Teramoto.

Work was commenced in September 1904 and completed in December 1911, four out of the seven years being spent on the laying of relief gold lacquer. Komin Harui to whose conception and workmanship is due the credit for this beautiful piece of work, is one of the few living masters whose names will be handed down to unborn ages. Next to Shosai Shiroyama of Tokyo, he is probably the greatest of the living artists in this line of work.

He was born to a makieshi family in Osaka in 1869. Losing his father while a boy, he learned the art under his father’s old pupil, Gyokushu Nakagawa, who was one of the best masters of the day. By invitation of the well-known dealer in art objects in Kyoto, the late Seisuke Ikeda, which whom his father had had some dealings, Komin Harui removed to Kyoto while still young. Here he at once applied himself with his characteristic ardour to the study of the superb specimens of old makie wares which happened to be in the possession of the dealer. The result was a marked improvement in his style of workmanship.

He meanwhile continued to work for his friend Ikeda who derived much profit by exporting art objects. Very few of his best productions remain at home, having mostly gone to adorn museums and private collections in foreign countries. Severing his connections with Ikeda in 1914, he removed to Suma near Kobe, where he continues to live and work in quiet seclusion. A devout Buddhist, he despises money and worldly honours. He is widely held in high esteem for his noble character no less than for his prominence in art. The present book-case is the largest piece of work he has ever produced.’

Kyoto Association of Lacquer Craftsmen, Kyoshikki: Kindai no bito dento shiryohen, s.v. ‘Harui Komin’, gives a slightly different account of the artist’s career, recording that he was a pupil of the fifth generation of Yamamoto Rihei and that he worked for Ikeda Seisuke in the Meiji period. In 1912, after the closure of Ikeda’s business, he moved to Kyoto and later, for health reasons, to Suma. Nothing is known of the collaborations listed, with the exception of Miyake Gogyo (1864-1919), a minor Kyoto painter who exhibited from 1907.

In 1921 the Crown Prince of Japan, Hirohito, visited England. To symbolize the significance of the trip and to cement peace and good will, this lacquer cabinet was presented to the Prince of Wales, later for a brief period King Edward VIII. The cabinet was apparently commissioned by Baron Sumitomo, presented by him to the Emperor, and subsequently selected as an appropriate gift for the royal visit.