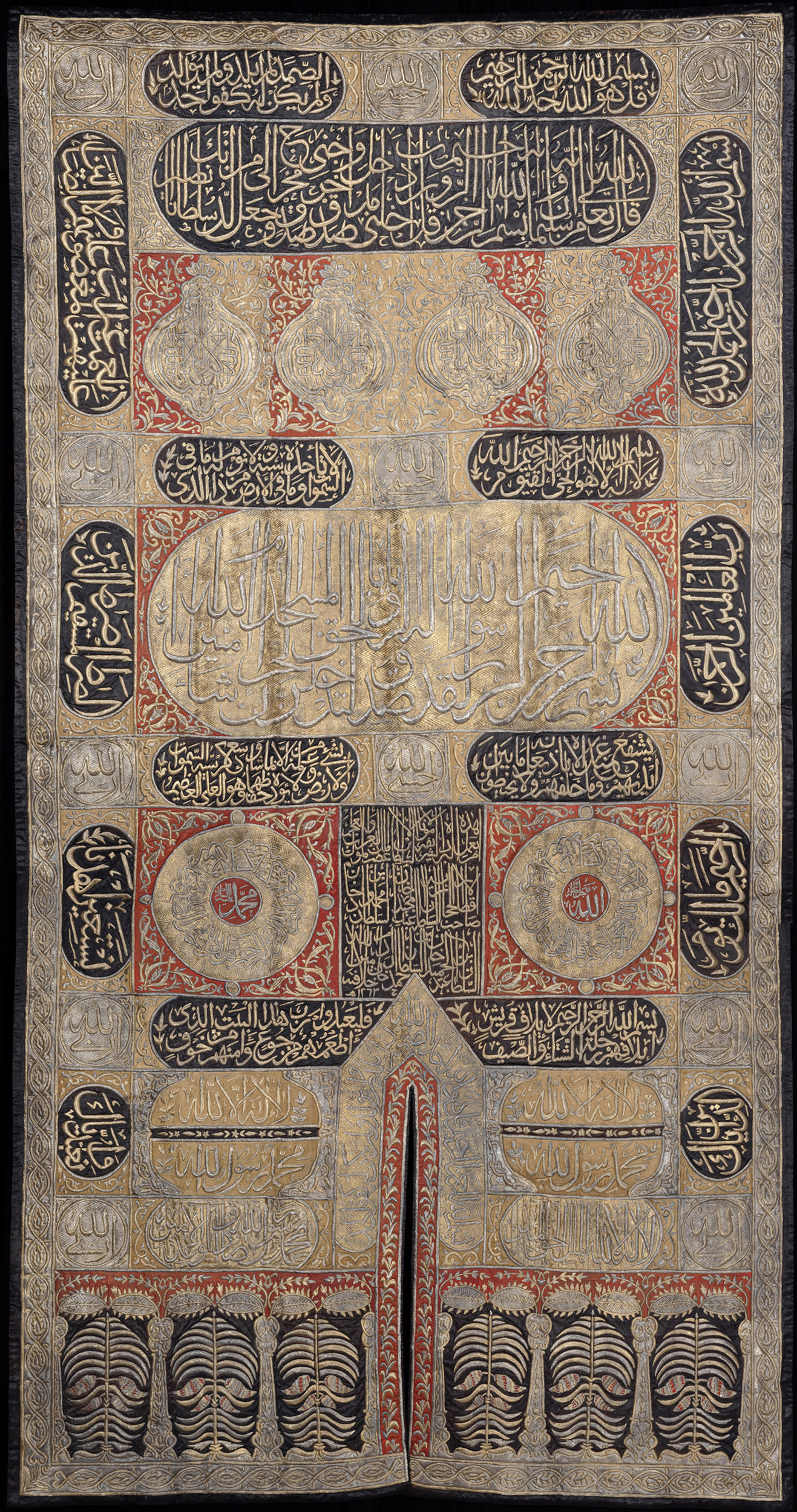 The sitarah (or curtain) for the door of the Ka‘bah – known also as the burdah or the burqu‘ – was by far the most elaborate part of the kiswah and was replaced annually. Since Mamluk times, sitarahs were made in Egypt, and left Cairo with the kiswah accompanied by the caravan of pilgrims amidst great pomp and circumstance. The design of this sitarah is typical of those made at the Dar al-Kiswah in Cairo during the 19th century, and it continued to be used until the early 20th century. Sitarahs of this type were usually made in four sections which were embroidered and then sewn together, the heavy wire embroidery almost completely obscuring the seams. The silk fabric was backed with heavy canvas which helped support the weight of the wire, which on a heavily embroidered example like this can weigh anything up to 60 kilograms. The inscriptions on this and curtains of similar design consist of the following. In the cartouches in border, top, is Surat al-Ikhlas, verses 1–4. In the larger panel below them are Surat al-Naml, verse 30 and  Surat al-Isra’, verse 80, and below it  the basmalah repeated four times in mirrored script. These are followed by a large panel embroidered with the first half of  verse 27 from Surat al-Fath, with the Ayat al-Kursi (‘Verse of the Throne’, Surat al-Baqarah, verse 255) in 4 oval panels above and below it. The two roundels contain a repetition of Surat al-Ikhlas, verses 1–4, arranged around the name of Allah to the right and Muhammad to the left. Between them is the dedication or commissioning inscription, sometimes in a rectangular panel as in this curtain, other times in a teardrop-shaped cartouche. The lower part of the curtain contains the opening to the door, and to either side of it, at the top, is Surat Quraysh, verses 1–4. Below is the shahadah, divided into two lines and repeated to the left and right of the opening. The two panels immediately above the decorative lower border are embroidered with, ‘There is no god but God, the Lord, the Truth, who makes all things manifest’ (to the right) and ‘Muhammad is the apostle of God, true to what he promised, worthy of all trust’ (to the left). The cartouches in the outer border on the right and left contain Surat al-Fatihah, verses 1–7. Some of the small roundels between the various panels and cartouches contain the phrase ‘God is my Lord’, while others are inscribed with ‘God suffices me’.