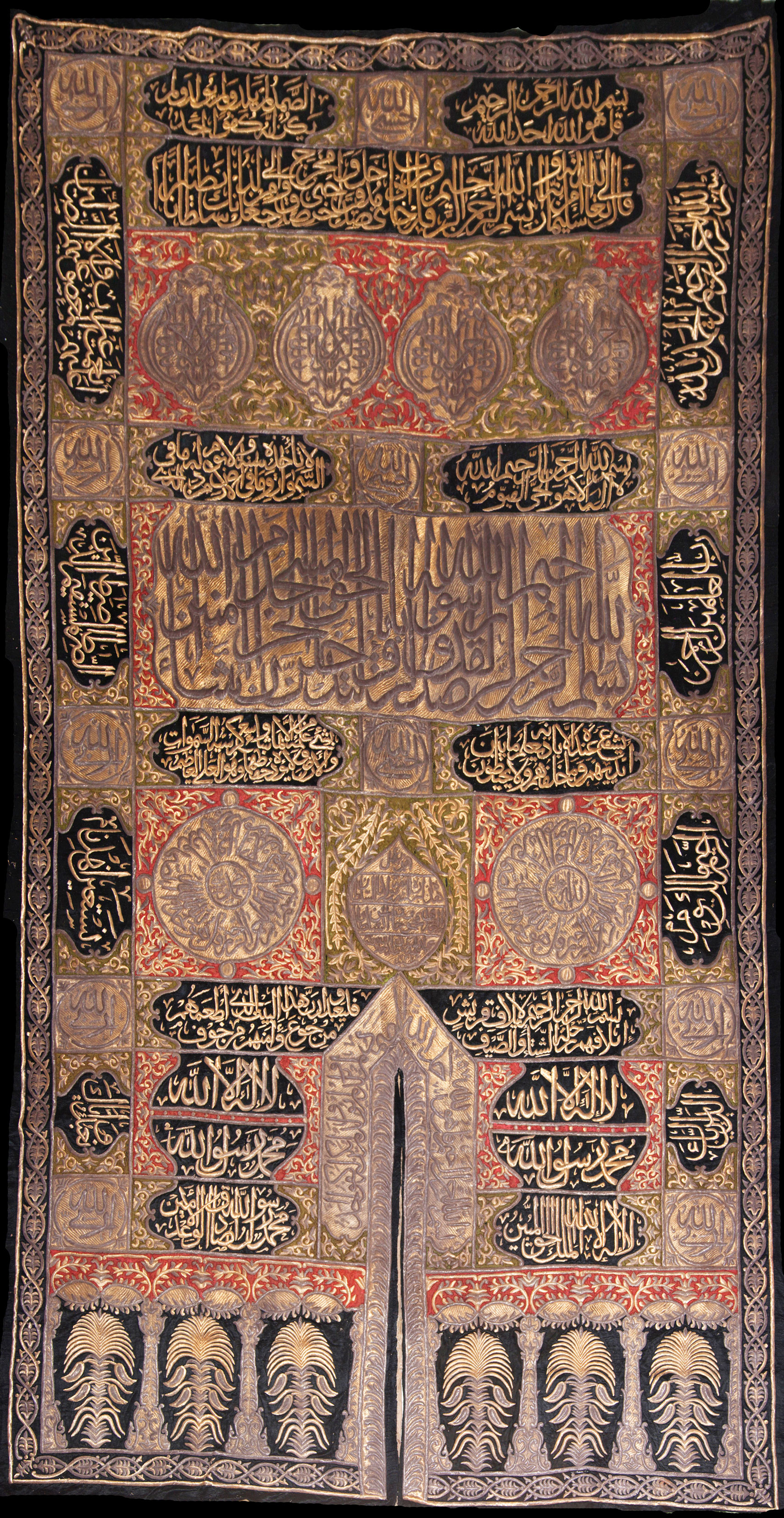 Sitarah for the Door of the Ka‘bah

Sitarah for the Door of the Ka‘bah

black silk with red and olive-green silk appliqués, relief-embroidered in silver and silver-gilt wire over card and cotton thread padding

The sitarah (or curtain) for the door of the Ka‘bah – known also as the burdah or the burqu‘ – was by far the most elaborate part of the kiswah and was replaced annually. Since Mamluk times, and until the mid-20th century, sitarahs were made in Egypt, and left Cairo with the kiswah accompanied by the caravan of pilgrims amidst great pomp and circumstance. Although the basic design of the sitarah changed over the centuries, Qur’anic verses always played a prominent role in its decoration. They are arranged in panels, friezes and cartouches and are mostly in thulth script. At the centre of this sitarah is a cartouche with the name and titles of the Ottoman sultan Mahmud II, who ordered the sitarah, and the date 1236 AH (1820–21 AD). The inscriptions, starting at the top, consist of Surat al-Ikhlas, CXII, Surat al-Naml, XXVII, verse 30 and Surat al-Isra’, XVII, verse 80; the basmalah, in mirror script in four cartouches. These are followed by Surat al-Fath, XLVIII, verse 27, in the wide panel, with the Ayat al-Kursi above and below it. Two roundels each with Surat al-Ikhlas, CXII, written in radiating script around the names of Allah and Muhammad, flank the dedication panel. Surat Quraysh, CVI; Surat al-Ikhlas, CXII, are around the upper part of the door opening, with the shahadah ‘There is no god but God, Muhammad is the Prophet of God’ to either side, follwed by ‘There is no god but God, the King, the Truth, who makes all things manifest’ and ‘Muhammad is the Prophet of God, true to what he promised, worthy of all trust.’ The verses of Surat al-Fatihah, I, are in the side borders while the small roundels contain the words ‘God is my Lord’ and ‘God suffices me.’ The lower border of stylised palm trees and vases is characteristic of sitarahs from this period.