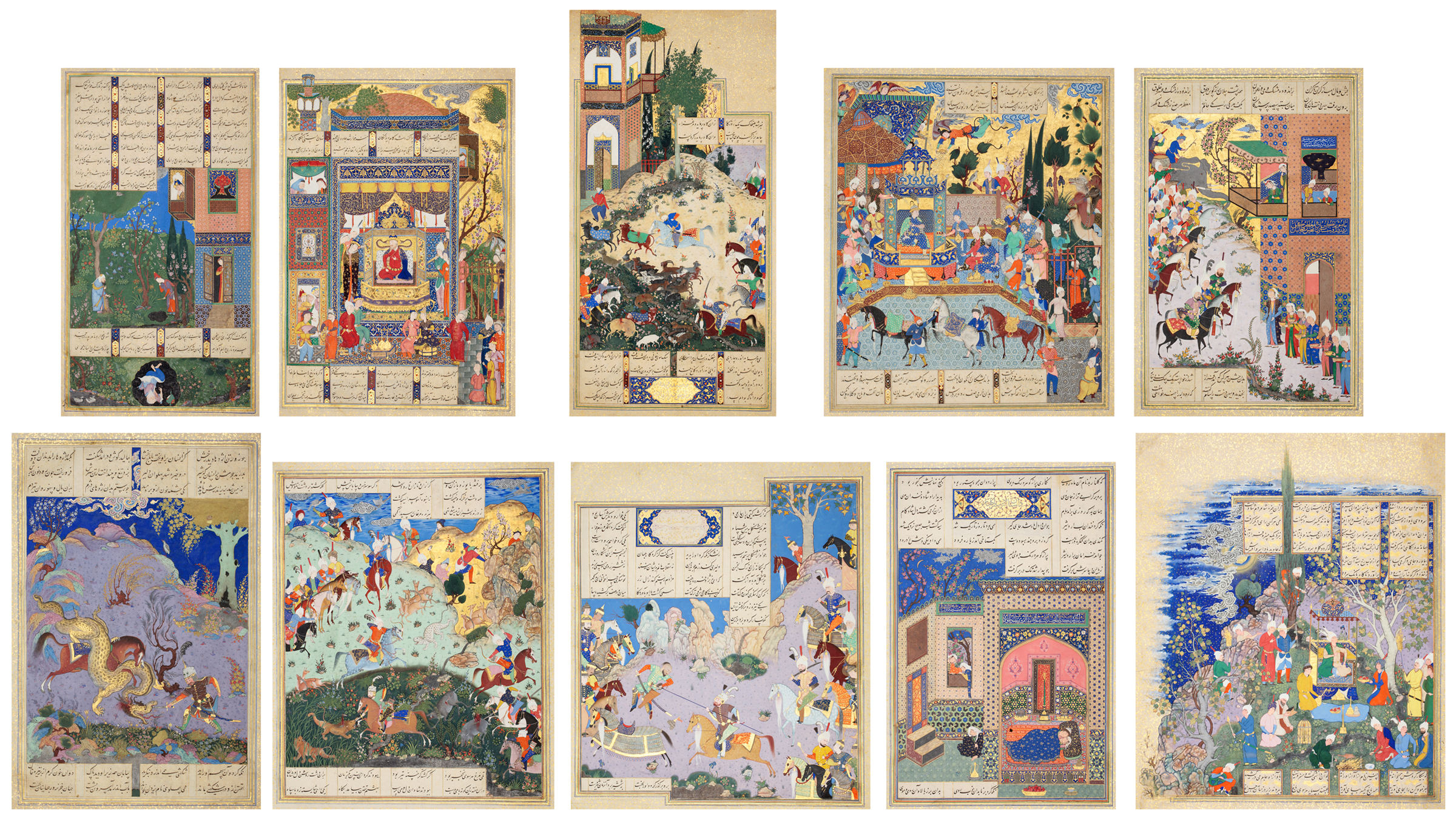 MSS 1030 27b
Zahhak receives the daughters of Jamshid

MSS 1030 731a
The musician Barbad conceals himself in a tree

MSS 1030, folio 135
Rustam and the Seven Warriors at the hunting-ground of Afrasiyab

MSS 1030, folio 731
The musician Barbad conceals himself in a tree

text copied in a superior nasta‘liq script, headings in riqa‘; with 22 lines to the page, arranged in 4 columns, two to a couplet; headings generally occupying the space of 2 couplets

The Shahnamah of Shah Tahmasp

Thanks to the conquests of the first Safavid ruler Shah Isma‘il I (r 1501–1524), his capital, Tabriz, inherited two great traditions of Persian painting: one from the court scriptorium of Timurid Herat, and the equally brilliant but lesser known scriptorium of the Aqqoyunlu Turcomans at Tabriz. Their fusion was to give rise to the finest illustrated Persian manuscript ever made, the so-called ‘Houghton’ Shahnamah (after the collector who broke it up in New York in the 1970s). It may have been begun before Shah Isma‘il’s death in 1524, possibly to commemorate the return of his young son, Tahmasp, who though little more than an infant had been sent to Herat as its governor. Of large format, it is written in calligraphic nasta‘liq, on fine paper, brilliantly illuminated and gold-sprinkled and was furnished with 258 illustrations. Its production, even with a large team of fine painters and other craftsmen, certainly took more than a decade and may even have continued into the 1540s, involving a second generation of painters. The format is independently conceived for each painting and must have involved constant consultation between scribes, painters and marginators.

Given this essentially corporate workmanship, with tried masters working side-by-side with pupils and apprentices, we might expect a uniformity of style and a more-or-less deliberate elimination of individuality, but in fact marked differences occur. General features, however, include a new approach to the technique of painting in opaque watercolour: treating the paint as if it were colour wash; a new subtlety of shading and modelling in pastel tones; the building up of tones and the enhancement of colour by gilding and silvering; and the use of mother-of-pearl and powdered talc to give sparkle. Stylistically, moreover, no attempt is made to present the heroes of the epic as historical characters; on the contrary, they are Safavid princes, soldiers and courtiers, and the details of their costumes, arms and armour, horse trappings and furniture remain an unsurpassed document of the rich material culture of the age.

The manuscript was given by Shah Tahmasp to the Ottoman Sultan Selim II at the time of the latter’s accession in 1566. By 1903, the manuscript was in the possession of Edmond de Rothschild. It changed hands once again in the early 1960s, when its then owner, Arthur Houghton Jr, began to disperse it. Today, some 140 of its paintings are in museums and collections throughout the world. The rest of the manuscript – the binding, the text block and 118 paintings – have been in the Contemporary Art Museum in Tehran since 1994.

Folio 135b Rustam and the Seven Warriors at the hunting-ground of Afrasiyab [see MSS 1030, folio 135]