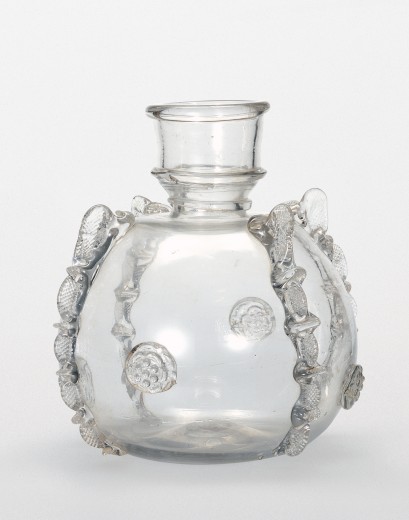 The lead glass used for this hookah base and its decoration point to a European, probably English, provenance. The shape, however, is purely Mughal and derives from earlier 17th-century metal prototypes. The upper part of the neck is cylindrical, with a thickened rounded rim, while the lower part tapers sharply. Between them is a trailed horizontal flange or rib, and a trail below forms a moulding above the narrow, flattened shoulders. The body is spherical with a flattened, pushed-in base that retains a pontil mark.

The body is decorated with four vertical trails that run from the shoulders to the base. These have been tooled and pinched into ‘frills’ using patterned pincers. The same treatment can be seen on English soda and lead glass, as well as on façon de Venise glassware made in the Netherlands. Four medallions, each stamped with a double rosette in relief, are applied between the trails. The rosettes are made up of six dots and a central dot and have surrounds of stylized petals. These too appear on late 17th-century English glass.

An initial attempt to interest the Mughals in English glass seems, appropriately enough, to have been a fiasco. A letter from John Brown at Ahmadabad in Gujarat to the East India Company dated 10 February 16187 recounts that they had received, on spec, a ‘barrell of wyndowe glass’, evidently crown glass. Muqarrab Khan was anxious to use it, but there was no glazier at Surat, ‘they being gone to Persia and I woot not whither to less purpose’. A glazier was finally sent out, but without the necessary tools, so that a valuable opportunity of awakening Jahangir’s own interest was lost. This was evidently final, for later letters from the Company’s agents insist that there was no longer any demand for window glass at all.