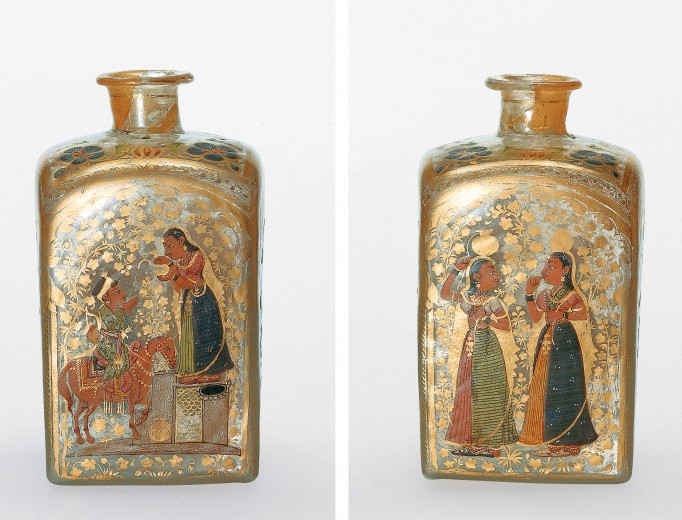 The bottle, which is square in section, has a short cylindrical neck with a flaring rim that has been rounded. The slightly convex shoulders have circular flow lines and several dimples, suggesting the addition of the upper portion by the half-post technique. Underneath it is slightly concave and retains a pontil mark and a diagonal mould-line, confirming the use of a two-part mould. The all-over gilt and enamelled decoration begins with short radial strokes at the mouth and short vertical strokes on the neck. The shoulders have floral and foliate decoration with dull blue five-petalled flowers at the corners, detailed in white and with red-tipped yellow stamens, framed by light yellow-green serrated leaves with black modelling. Between the leaves are yellow buds with red tips. The shoulders are edged with a gilt zigzag band between plain gilt borders and filled with half-leaves.

The sides are designed as panels, with cusped arches edged with leaves and with foliate capitals on chevron columns. On one of them a young woman stands on a built-up wellhead with a stylized weir beside it pouring liquid from a gilt ewer into the cupped hands of a young archer on horseback. The background is filled with gilt vine trails. On the side opposite, which has a similar background of vine trails, two women carrying gilt water jars on their heads are shown conversing. The treatment is reminiscent of traditional Ragamala painting, although the finger that the woman on the right puts to her lips is a characteristic Persian gesture of surprise or dismay. On the other two sides are composite flowers with dull blue petals and whitish centres springing from a yellowish-green leafy tuft with black modelling. The background is filled in with gilt florets and minute cloud-scrolls.