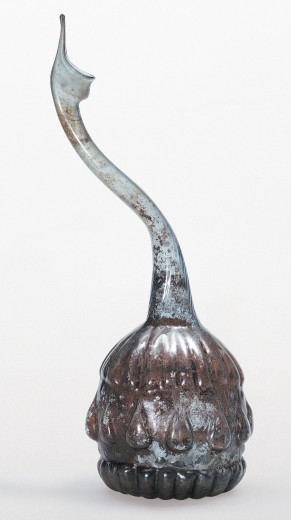 colourless, slightly bubbly glass with a bluish-grey tinge; pattern-moulded, free-blown (or possibly blown in a multi-part mould and further inflated) and tooled

The flask belongs to a group of ‘swan-necked’ vessels distinguished by their s- or z-shaped neck, and the characteristic form of their mouths with an extended, vertical lip. Unlike this example which has a flattened base, however, some swan-necked vessels rest on a high, knopped stem with a splayed foot, while yet others have a pushed-in base with a footring.

The body of the flask is decorated with a broad band of 12 stylized cypresses, composed of an almond-shaped boss resting on a triangular base. Between the tops of the trees are pairs of dots, with a single dot between each base. The 21 flutes decorating the upper part of the body and the shoulders continue above to the lower part of the neck, which is spirally twisted. A fluted pattern also decorates the lower part of the body and the base, giving the latter the appearance of a multi-petalled rosette. Its kicked centre retains a pontil mark.

The exact function of these vessels has not yet been determined, although they are often referred to as rosewater sprinklers. An experiment carried out with this flask, however, clearly demonstrates their unsuitability for this purpose: liquid is dispensed in a steady stream – and not in droplets, as would be required from a sprinkler – which is easily controlled, especially when the bottle is held in a position slightly above the horizontal, with one hand supporting the base and the other placed around the base of the neck. In this position, the vertical lip acts as a spout, its channelled contour directing the flow of the liquid so well that it is even possible, as with the German Kuttrolf and Venetian inghisteri to drink straight from the flask.