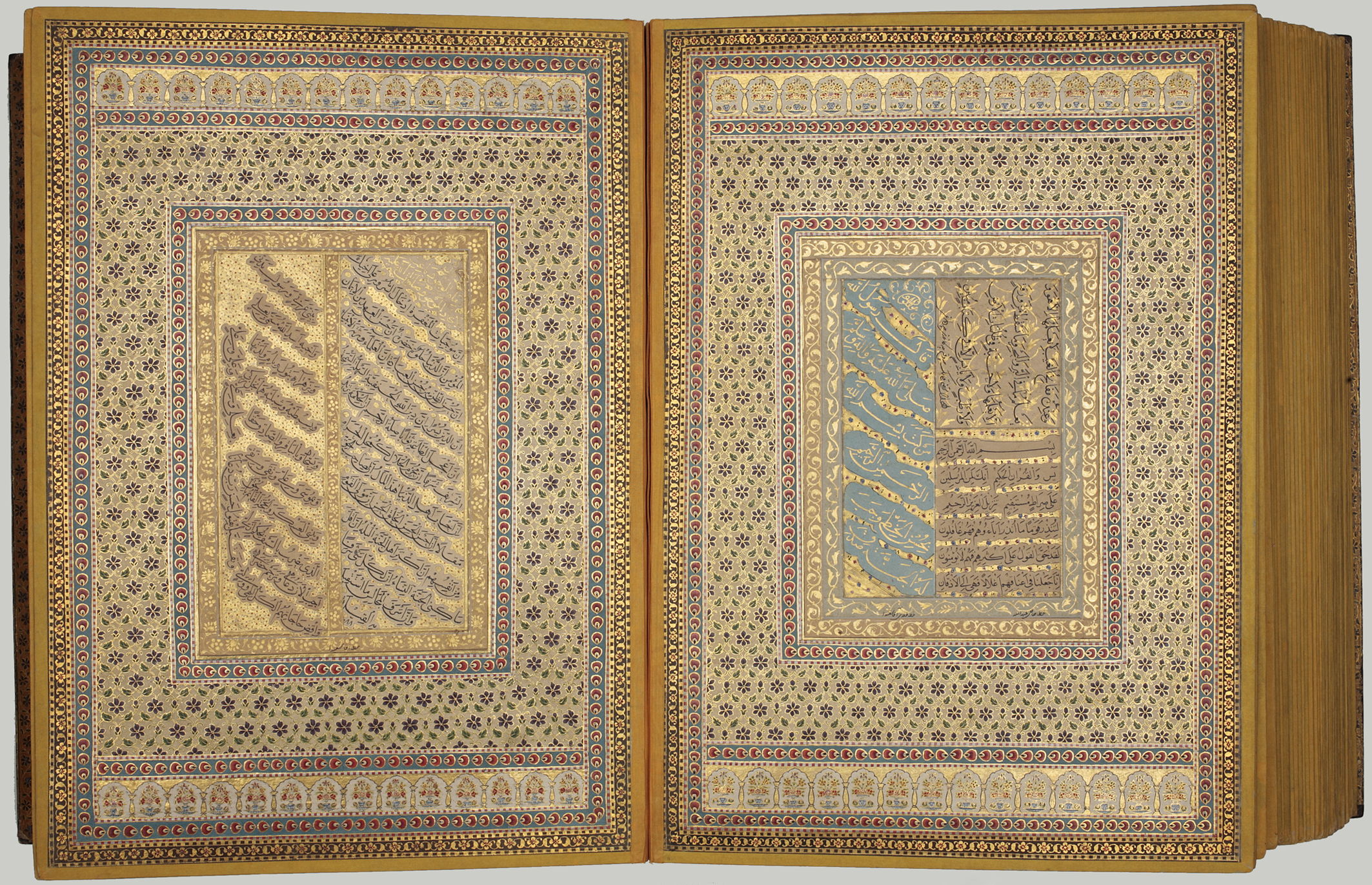 This is the most lavishly-illuminated Mughal calligraphic album known. Individual pieces are placed in decorated panels, arranged in matching pairs and mounted on double-page spreads splendidly decorated with patterns drawn mostly from Mughal enamels or pietra dura work. The decoration, which is identical on both pages of a spread, varies across the album.

Originally bound as a concertina album in lacquer-painted covers, the album was rebound as a codex in Europe, sometime in the early 20th century.

Some of the panels of calligraphy are signed and a few are dated. The dates given range from AH 1060 (AD 1650–51) to AH 1090 (AD 1679–80). The pieces are not arranged in chronological order and those that are not signed bear attributions, written very discretely below the lower border of each assigned panel. The texts themselves vary considerably, but are mostly excerpts from Holy Qur’an, the hadith and other religious writings, as well as poetry and wise sayings. It is obvious, however, that they were chosen primarily for whom they were written by rather than for their content.

Given the amazing quality of the album, it is curious that there is no commissioning notice or dedication. The only indication as to a possible patron is an ambiguous note on the flyleaf which reads, ‘An album of nasq (sic; for naskh) by old and present masters, which during the lifetime of Jahangir Beg, by the recommendation of his own painters, were renovated.’

Obviously, the ‘Jahangir Beg’ referred to cannot be the Mughal emperor Jahangir (r. 1605–1627) for a number of reasons, not least because all of the dated pieces are well beyond his reign. A very probable candidate, however, is Jahangir Beg Jansipar Khan, who was appointed by the emperor Awrangzib as the first permanent governor of Hyderabad following the Mughal conquest, circa 1680–90, and remained in this post until he died, 12 years later.

Although Jahangir Beg Jansipar Khan may have ordered the album for himself, it is nevertheless very tempting – considering not only the superior illumination and the exquisite richness, but equally the ambiguity of the note on the flyleaf – to suggest that he may have ordered it for presentation to the Emperor in gratitude for his appointment. Awrangzib (r. 1658–1707), the first Mughal emperor of unimpeachable Muslim orthodoxy, was known to favour calligraphy rather than painting, and this may be why Jahangir Beg Janispar Khan’s painters ‘recommended’ that he ‘renovated’ this album of specimens by calligraphers most of whom were active during Awrangzib’s reign.