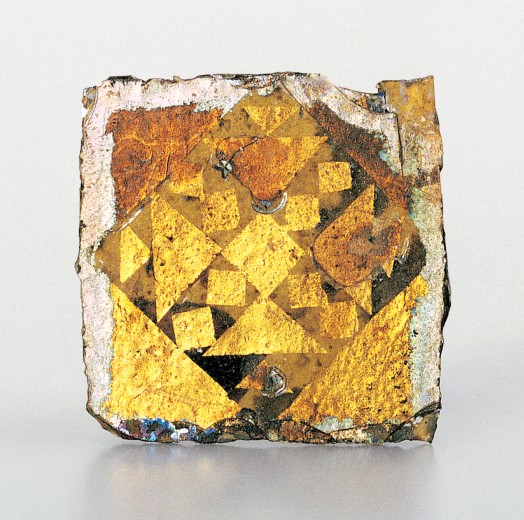 pale yellow glass with a greenish tinge and gold leaf; cast, tooled and decorated in the gold-sandwich glass technique

This tile belongs to an extensive group, of which eight, now in the National Museum in Damascus, were found in 1935–6 at Maarata in northern Syria, in the region of Ma‘arrat al-Nu‘man, south of Aleppo on the Hama road. The designs are most usually crosses, that of the Khalili specimen being one of the most elaborate.
The sandwiched pane of gold-glass is cut and irregularly nipped on all four sides. It appears that the nipping and grozing were necessary to tidy the edges during manufacture. The Roman sandwich technique with gold leaf or foil continued to be practised by the Byzantines and was later adopted by Muslim craftsmen.