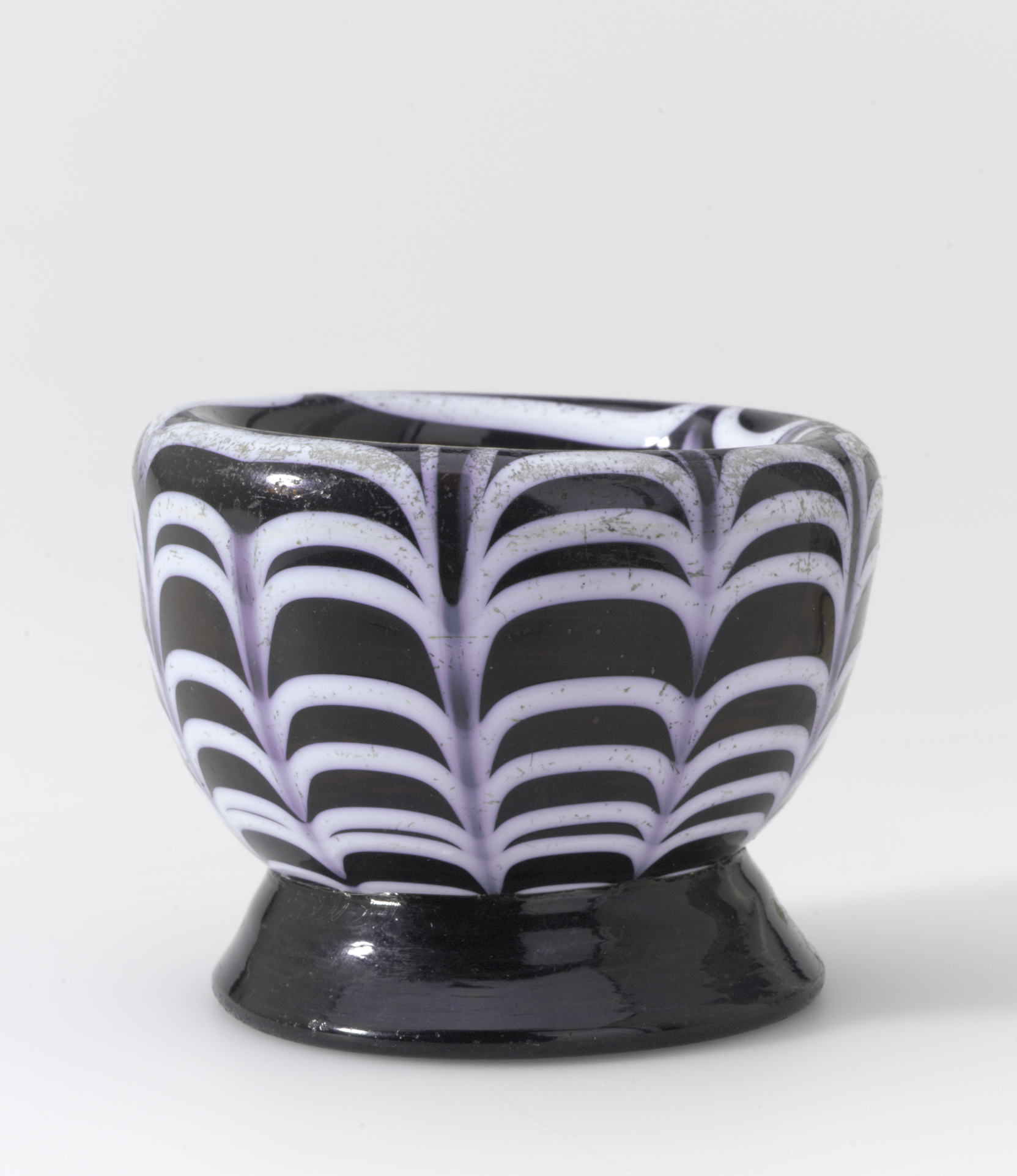 This is a fascinating and unique object for, despite its unassuming shape and size, its double-wall construction is without parallel in Islamic glass. Ceramic double-walled sweetmeat dishes with single or multiple compartments were popular in Iran in the 12th and early 13th centuries, but these tend to be larger and are usually provided with a small opening through which the cavity between the walls could be filled with hot or cold water. This small bowl, however, has no such opening. It was perhaps therefore intended for serving chilled foods, with the double-wall construction providing an insulating layer in a similar manner to the modern Thermos jug.

The method in which the bow was made is also interesting. The vessel was initially formed as a small spherical flask – the original rim can be seen inside the bowl, surrounded by a thick white trail which is in relief. The ‘flask’ was then trail-decorated, marvered and tooled before it was expanded on the blowpipe. The bottom was pushed in towards the rim with a pontil rod and the vessel was cooled so that the blowpipe could be cracked off. The splayed foot was applied and flared out and the vessel broken away from the pontil rod. The underside of the base is concave but it retains no pontil mark; the latter is to be seen inside the bowl, within the original rim.

Marvered glass may be described as glass of one colour decorated with trailed glass of another colour, the trails being flattened into the parent glass by rolling the object along a marble slab or ‘marver’ and being lent a pattern by combing. The technique was especially popular in Pharaonic Egypt and, from the Roman period onwards, its decoration was further enhanced by blowing [see GLS 436]. Fragments have been found over a very wide area, at Islamic sites ranging from the Umayyad to the Mamluk period, but with a concentration on Syria-Palestine and Egypt, both at Alexandria and Fustat. While it is difficult to exclude the possibility that the industry was directly continuing a Roman fashion, the vast majority of surviving pieces and fragments appears to date from the 12th and 13th centuries, although marvered glass continued to be used for weights in Egypt up to the 14th century. Not only are shapes very characteristic of the Mamluk repertory; their decoration exploits other types of Mamluk glassmaking, including gilding and enamelling [see GLS 273].