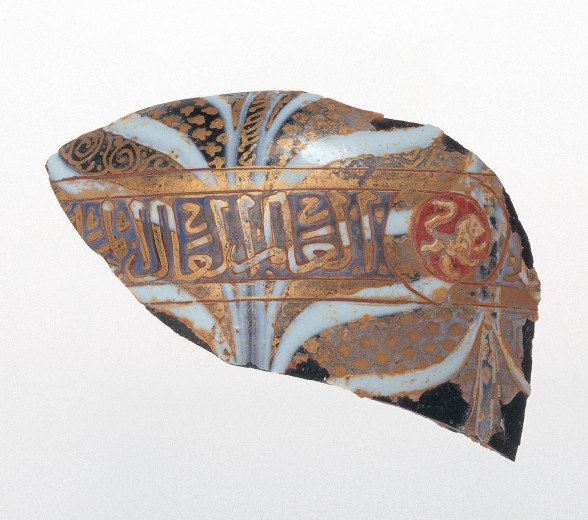 second half of the 13th or early 14th century AD

second half of the 13th or early 14th century AD

This fragment, of a convex shape which suggests that it may be from the shoulders of a bottle or flask, is most unusual in having enamel applied over the marvered and gilded surface of the vessel. A small group of fragments and vessels exist that are marvered and gilded but have no enamelling; another small group consists of pieces that have been decorated with white or turquoise enamelling in imitation of the marvered technique. The background is of combed white foliate motifs filled with gilt scrolls, crosses and oblique hatching. A band of gilded cursive inscription on a blue enamelled ground reading al-‘alim al-‘adil al-mu[j]a[hid] (‘the learned, the just, the warrior’) extends across the fragment. The red outlines of the letters have been painted over the gilding. The inscription is broken by a circular medallion with a blazon of a lion passant, painted in white enamel with gilt contours on a red ground. It is shown facing to the right, with its left forepaw raised and its tail curled over its back.

The lion blazon is particularly associated with the Mamluk sultan Baybars (r 1260–1277) and appears on his buildings and his coinage [see AV 547]. It was also used by his son, Baraka Khan (r 1277–1279) and appears on several other pieces of enamelled glass. It has been pointed out, however, that the lion blazon is too common throughout the Mamluk period to have been associated with a single individual. Although Baybars was a considerable builder, none of the glass mosque lamps commissioned for his buildings survives; nor are there any secular glass objects associated with him. There is, therefore, no certainty that any of the objects with lion blazons were produced for him or during his reign.