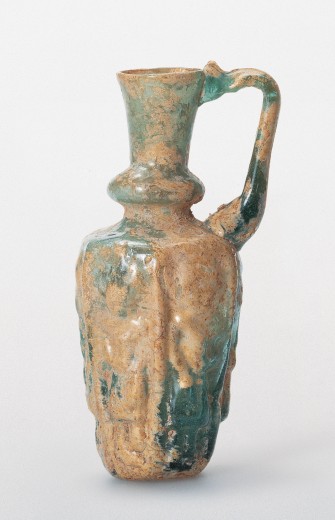 The decoration of this small jug is unique. It consists of a row of six figures with prominent headdresses or haloes, one on each facet of the body. The figures are represented in frontal view, standing with their arms by their sides, each holding an object. They are dressed in knee-length garments, their legs somewhat apart and their feet shown from the side. Some of the figures may be musicians – two hold what appear to be flutes – but the remaining objects are not clear enough to be identifiable [see drawing].

The jug forms a transition between Byzantine pilgrim flasks of the 6th and 7th centuries and later Islamic vessels that evolved from that tradition. The six-faceted body tapers towards a kicked base that retains a pontil mark. The facets are separated by moulded ribs that join with the shoulder line to create something like an arcade. The angular handle is pulled out and meets the rim. The flaring neck, with the prominent torus at its base, is typically Islamic.