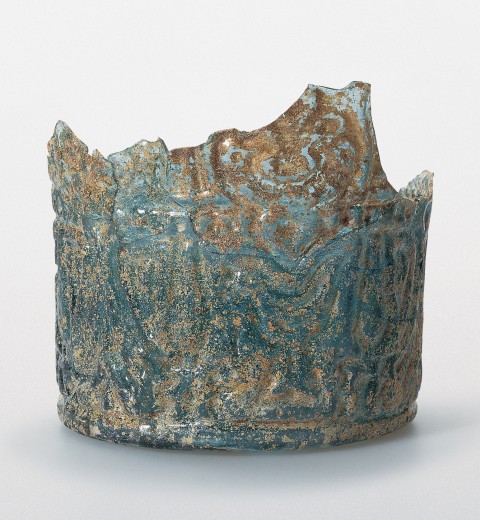 Fragmentary Base of a Flask

Fragmentary Base of a Flask

This fragmentary vessel preserves a unique decorative cycle and is the most elaborate pattern-moulded design blown in a full-size two-part mould. The surviving decoration is in two main registers separated by a narrow band of sunken dots. The upper register, of which very little remains, had circular medallions filled with a trilobed crest surmounting a pair of confronted birds, their long necks intertwined. The lower register, which is nearly complete, has single birds alternating with inverted palmette-like motifs, flanked by stylized cypresses. The sunken relief is unusual and may be an attempt to imitate more expensive cut decoration.
The piece is the lower half of the body of a straight-sided, mallet-shaped flask. It has a flat thickened base that retains a pontil mark. The two parts of the mould differed: one had two birds walking left to either side of a large palmette, while the other was cut with a single bird walking right with a palmette to either side. The lines where the two parts joined are clearly visible on the base and the walls, and the seam runs up the centres of two of the cypresses.