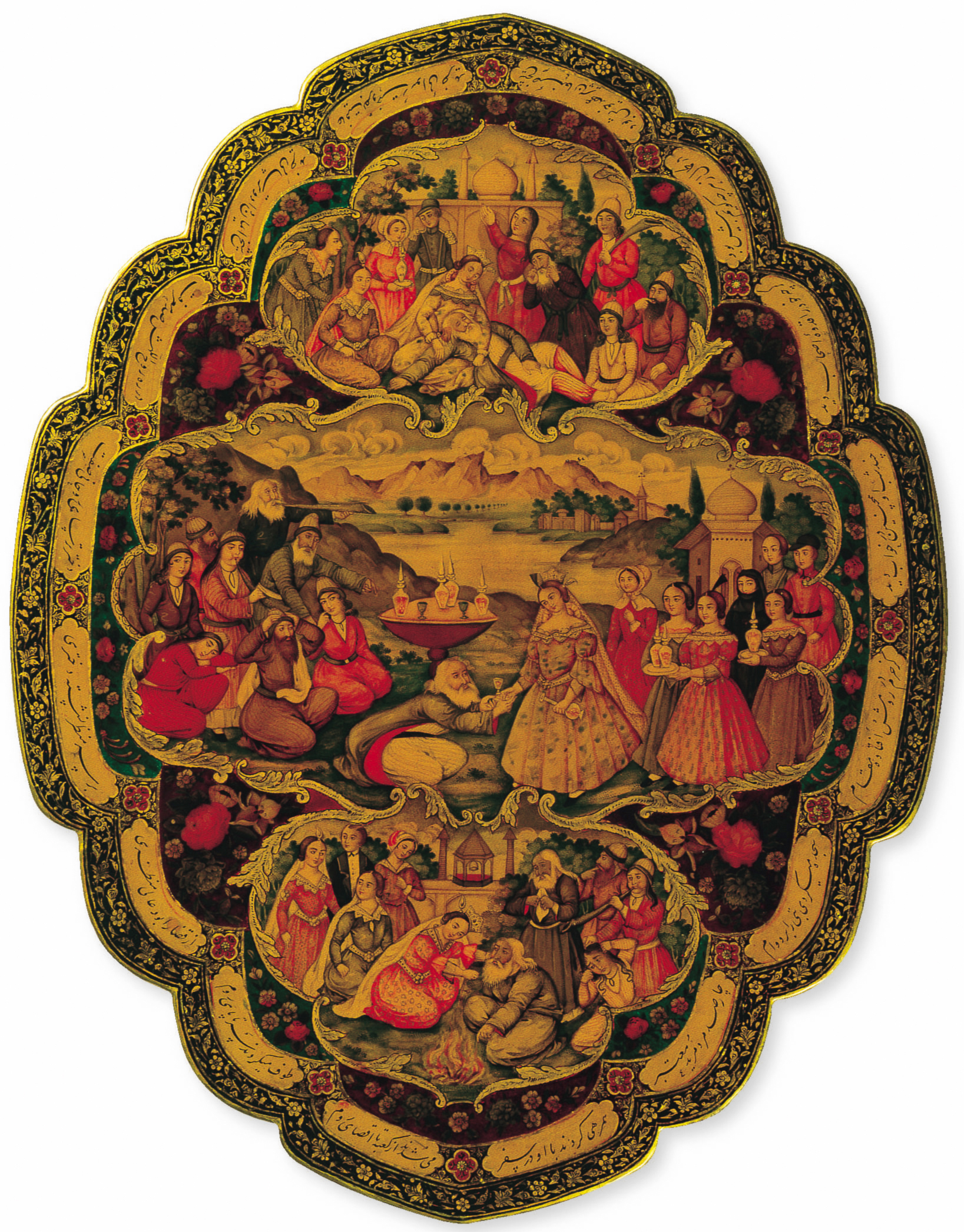 LAQ 43, front of case with shutter

This unsigned mirror case is certainly the work of Isma‘il, for several elements of the design may be seen on a mirror case he painted in 1270 AH (1853–4 AD) and on another dated four years later [see LAQ 42], especially the depiction of Armenian clergy and the banquet scene, both of which occur on all three cases. In addition, the verses inscribed around the outer face of the shutter are from the same tarji‘band of Hatif Isfahani as appear on other works signed by Isma‘il.

The back of the case and the outer face of the shutter are divided into three panels by gold rococo scrollwork. The three panels on the back of the case illustrate the story of Shaykh San‘an and the Christian maiden. Any doubt as to the identification of the subject-matter is allayed by the eight distichs in the cartouches of the border, which are quotations from the tale as related by Farid al-Din ‘Attar in the Mantiq al-Tayr (‘The Conference of the Birds’). Shaykh San‘an fell in love with a cruel Christian maiden and for her sake abandoned his religion, but through his resulting humiliations attained enlightenment and converted the maiden to Islam too.

The panels on the outside of the shutter illustrate the verses from the tarji‘band of Hatif that surround it. The top panel shows clergy in Armenian vestments and worshippers in European dress outside a church. In the larger middle panel a banquet is being conducted al fresco by a large group of Europeans, with a lakeland view serving as the background. The bottom panel shows a European couple riding in a carriage beside a lake.

The inner face of the shutter bears a veiled image of the Prophet Muhammad, seated among members of his family. At his right hand sits the Imam ‘Ali, and before them are the diminutive figures of Fatimah, who is also veiled, and the two sons of ‘Ali and Fatimah, Hasan and Husayn. Both the Prophet and ‘Ali are flanked by a companion, and there are three angels above. In this case the verses of the border are of an obviously pious character.