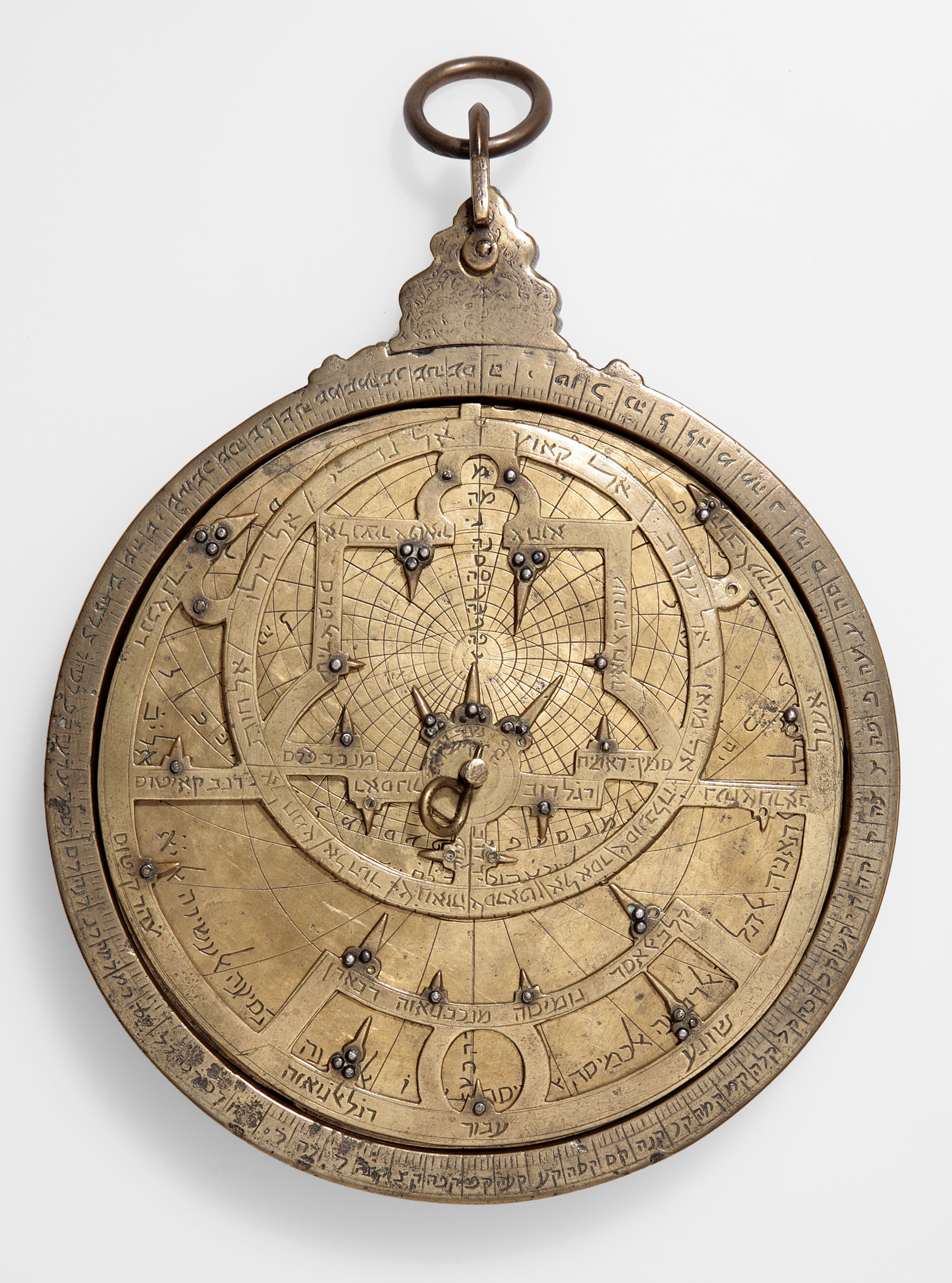 brass, cast and sheet, cut and engraved; the rete set with silver studs, some now missing

Astrolabes inscribed in the Hebrew script are very rare. Indeed, only three others are known, all of which can be presumed to have been made in non-Muslim Europe, as in their quatrefoil Gothic design they resemble contemporary instruments with Latin inscriptions. This astrolabe is therefore therefore unique, as it was made by a member of an Arabic-speaking Jewish community. The maker’s client seems to have intended to use the astrolabe in Tunis, Seville and Cordoba, and perhaps also in Sijilmasah, Marrakesh, Cairo and Jerusalem (see below), and the rete is set with the silver studs characteristic of astrolabes from Islamic Spain and the Maghrib. It therefore seems reasonable to attribute the piece to Spain or North Africa. At the same time a consideration of the vernal point in the zodiac/calendar  scale on the back, of the star positions on the rete, and of the general style of the astrolabe suggests that it was made as early as the turn of the 14th century.

The rete indicates 26 stars, 13 within the ecliptical circle and 13 outside it. Each star is named and is indicated by a simple triangular pointer provided with one or three silver studs at its base. Four additional studs were arranged symmetrically on the upper part of the rete.

The kursi, which has engraved arabesque decoration, was made separately from the mater and was soldered on, perhaps in the course of a repair. The associated shackle has similar decoration. The inside of the mater is engraved as a plate ‘for the latitude of Tunis, 37˚’. On the back, within four quadrants of degrees marked at intervals of 5˚ from the East–West line (i.e., the horizontal), there are a scale by which the signs of the zodiac could be correlated with the solar months of the Julian calendar and, approximately, with the lunar months of the Jewish calendar; a form of perpetual almanac; and half a shadow square.

Around the side of the rim there is a long inscription in Judaeo-Arabic, that is, one of the types of Middle Arabic used by Jewish communities and written in the Hebrew script. Middle Arabic was a form of literary Arabic based on a vernacular but influenced by the Classical standard. It was usually employed by non-Muslim populations of the Arab world, who were free of the pressure to conform rigidly to the Classical language felt by Muslims, and as there was no universally respected model Middle Arabic varies from example to example. In Judaeo-Arabic the orthography too varies enormously and shows many inconsistencies. As a result, the inscription on the rim, which is not part of the standard repertory, is very difficult to interpret. It appears have been addressed by the maker to the user, ‘May it show to you the things which need to be paid attention to, in … that you are great who have lifted it. But your servant Abraham … your fate from something … was not satisfied with the country it shows you, [for] it has shown you the furthest star by means of its content’.