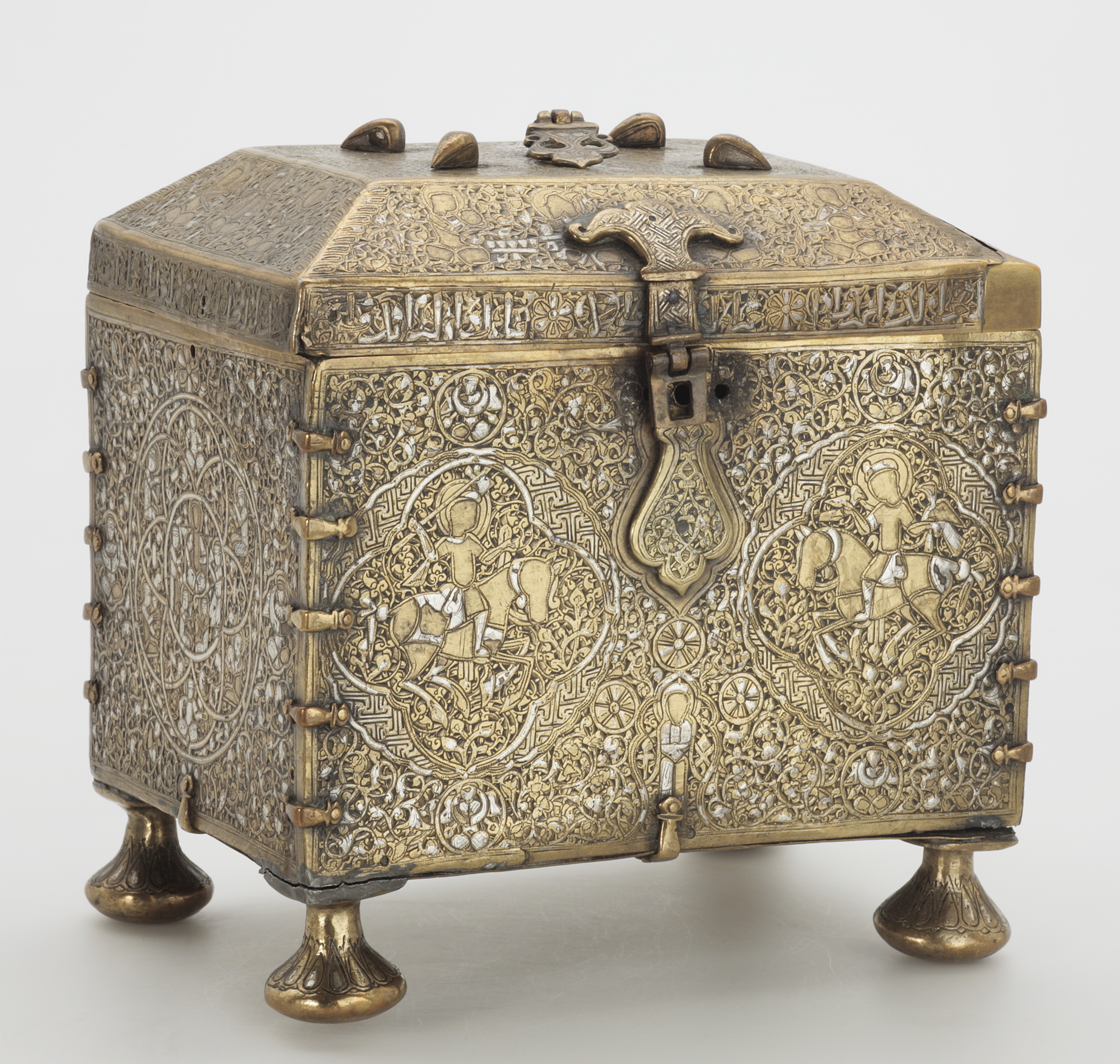 Casket with the Remains of a Combination Lock

first half of the 13th century AD

Casket with the Remains of a Combination Lock

first half of the 13th century AD

The lid has four dials, each with 16 letters in abjadi (numerical value) order and pointers which can still be turned, although the lock mechanism is now missing. Only four other Islamic caskets with this type of lock are known to exist.

The top of the lid bears a radiant sun and a lobed medallion of an enthroned prince, while the gabled sides bear musicians or cup bearers, with enthroned princes on the narrow sides.

The front of the casket has two quatrefoil medallions of mounted figures, one a lancer and the other a falconer, each with small medallions of figures bearing crescent moons above and below. Between the quatrefoils is a standing figure with cross and book rest. The narrow sides show drinkers or musicians in the arcs of intersecting circles, with an enthroned prince and attendants, all drinking, at the centre. This central medallion is flanked by smaller lobed medallions, each with a cross-legged seated figure bearing a crescent moon. The rear panel has a central medallion of a drinking prince with attendants and two figures playing backgammon. This is flanked above by medallions with musicians in small roundels and below by even smaller roundels of more cross-legged seated figures bearing crescent moons. Below these are lobed arches with standing figures bearing attributes of Christian priests or deacons. The ground is a uniform mass of vigorously spiralling split-palmette scrolls and six- or eight-petalled rosettes. In its pristine state, the casket, with its lavish silver inlay, must have been dazzling.

Christian subjects occur on quite a few silver inlaid brasses made in northern Mesopotamia and, later, in Damascus in the 13th century and may include scenes from the life of Christ and of the Virgin, although without any reference to the Passion. They may have been ordered as liturgical vessels, by or for prominent Christian patrons, as the depiction of a cross on the front of this casket suggests.