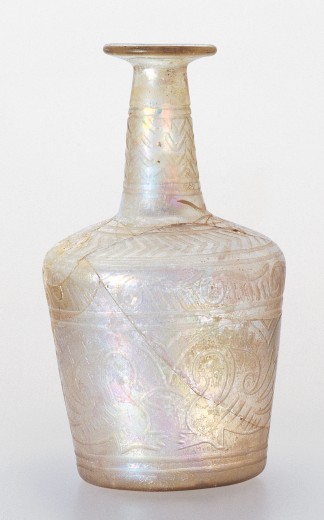 colourless glass with a yellowish tinge; blown in an open mould and linear-cut

The flask belongs to a group of mallet-shaped vessels sometimes referred to as carafes. They characteristically have wide cylindrical bodies, broad shoulders and necks that taper slightly to broad flat rims, although many variations in proportions and shape occur. These are especially noticeable in the profile of the body, which may be cylindrical, tapering or waisted; and in the line of the shoulders, which may be flat or rounded. Among the more important archaeological finds are 17 that were recovered from the Serçe Limani shipwreck (some complete, others fragmentary); 7 excavated at Nishapur; and 7 found in a jar with other glass vessels at Sabra Mansuriyya, near Qayrawan. A probable 10th- to early 11th-century dating is corroborated by two finds from China. One of them was found at Naiman, Inner Mongolia, in the tomb of Princess Chenguo (Liao Dynasty) who died in 1018. The second, from the stupa of the Dule Temple in Jixian, Tianjing, must have been deposited there before 1058. A few are plain or have mould-blown decoration, but most, like this example, bear wheel-cut decoration.

The tapering neck is decorated with four zigzag lines within double borders, and the sloping shoulders bear a broad horizontal chevron band. The decoration of the body, which tapers towards the base, is divided into two registers. The upper one has an unusual filling – groups of oblique lines terminating in an open spiral – repeated eight times. Below are two pairs of confronted birds with an ‘eye’ motif between them. The birds, standing beneath shallow arches, have hooked beaks, raised wings and fanned tails [see drawing]. The thickened rim is uneven and has a thick, rounded edge. The base is flat and retains a pontil mark.