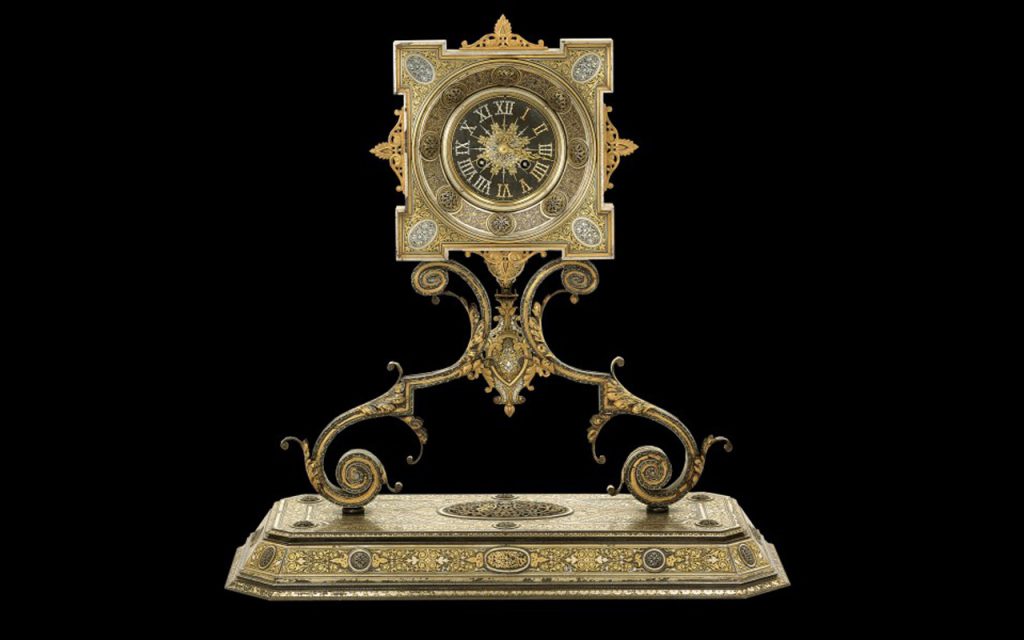 The clock movement is enclosed in a square iron case raised some 25 cm above its base by two decorative wrought-iron supports. The black dial, cross-hatched overall, has an applied gilt-iron sunburst through whose centre pass the arbors for the hands, which are similarly chiselled, pierced, and gilt. Roman numerals in silver-wire damascene indicate the hours. The dial is surrounded by a false chapter ring bevelled inward. To this are affixed eight equally spaced pierced and chiselled bosses, also gilt. Four are placed at the three, six, nine, and twelve positions; the other four are spaced equally between. Since the bosses are much more prominent than the numerals, they can give the confusing initial impression that they are the hour indicators.

Projecting from the four sides of the clock case are pierced and gilt iron appliqués in the form of scrolled broken pediments. The front surface of each of the case’s corners is damascened in gold and outlined with a fine silver wire, as on the brooch ZUL 135. In the centre of each of the corners is a damascened oval plaque containing a cross, another common ornamental element in Plácido’s repertoire.

The wrought-iron supports for the clock are square in section and terminate at both ends in a tight spiral. Applied to them are ten gilded sheet-iron acanthus leaves. The pendulum weight is fully visible between the supports. It is chiselled in relief in the shape of an inverted anthemion capped with a C-scroll and flanked by chiselled acanthus leaves.

The vertical sides of the wide iron base angle inward towards their top. The corners of what would otherwise be a rectangular base are clipped, thus dividing the vertical portion into eight flat surfaces. To these are applied twelve round and oval bosses patterned like those around the false chapter ring. Seven more identical bosses are applied to the upper face of the base, including a large oval directly below the pendulum.

The entire base is damascened in silver and gold wire in patterns almost identical to those on the signed casket ZUL 3. No maker’s mark appears on either the clock’s case or its base, although the plate from the underside of the base, its expected location, is missing. However, the extensive use of elements of Plácido’s decorative vocabulary, and their execution in heavy wire damascening unadorned with punch decoration, strongly indicate the involvement of this master or his workshop in this clock’s construction.