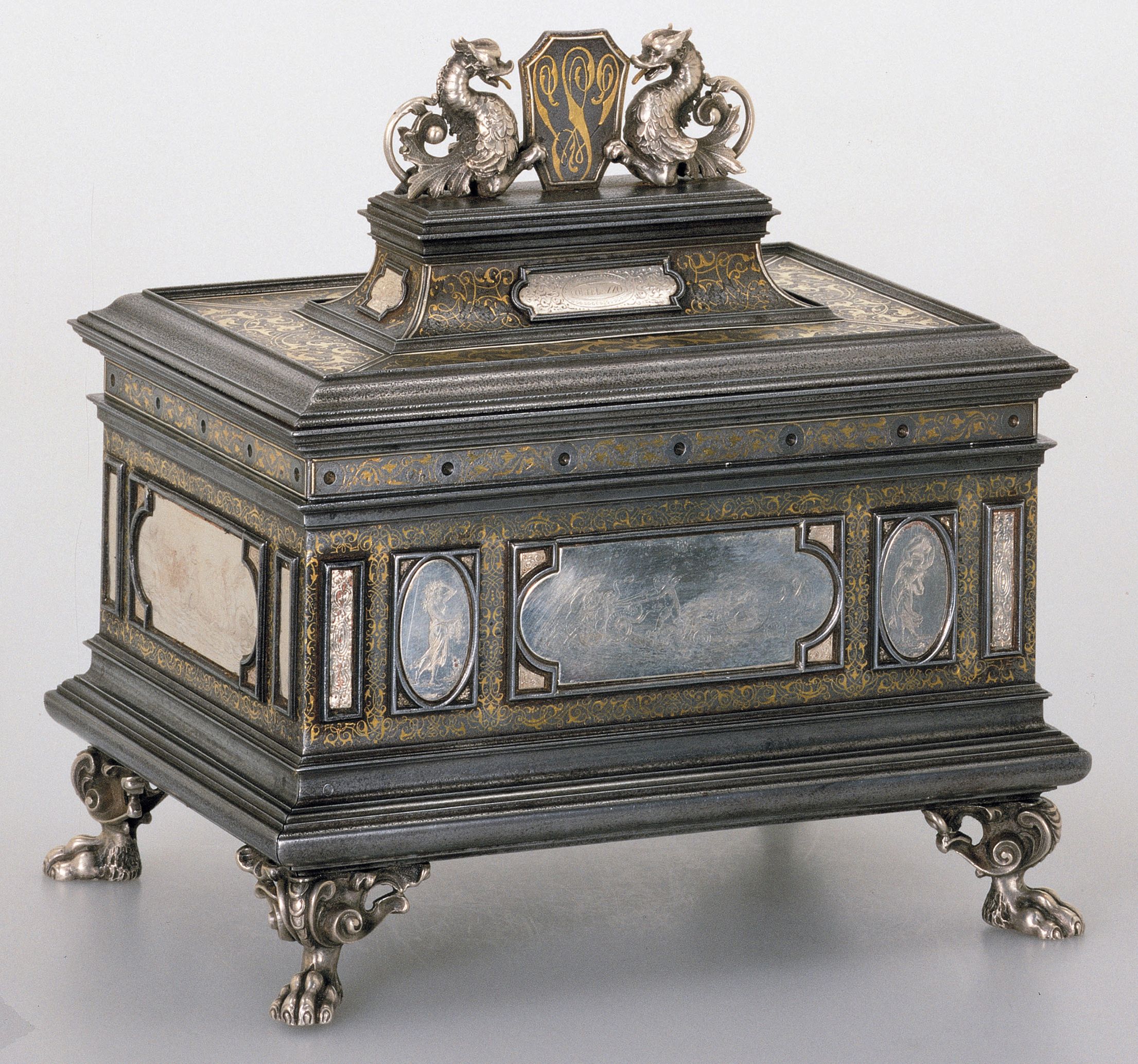 This small iron casket of Renaissance design has heavy salient mouldings reminiscent of the Fonthill casket (ZUL 102). The lid is entirely removable, the raised central crest-like ornament acting as its handle. Around the four sides of the box are silver panels engraved with mythological scenes set flush with the surface and framed in rounded iron mouldings. Two sculpted wyverns on the crest appear to be of cast and chased silver. They confront each other and hold between them an iron shield with the gold damascened letters ‘WS’.

Immediately below the platform on which they sit is a coved section with iron-framed plaques on which, on one side, is engraved the artist’s name and, on the other, the place of manufacture. Two small silver plaques on the ends are engraved, respectively, with the word ‘FECE’ (‘made’) and with a date which seems to read ‘1881’ or ‘1901’. The date has apparently been deliberately obliterated, although the first and last digits are fairly certain; 1881 is more plausible, placing the artist in his early sixties rather than his eighties. Both the coved area and the horizontal sections of the lid are damascened in gold with leaves, palmettes, and spirals and tendrils in gold wire. Each of the four sections of this area is outlined in silver wire. All vertical areas of the sides are similarly damascened, but without the silver dividing-lines. The casket sits upon four cast and chased silver feet with floral volutes at the knees and hairy paw feet.

Antonio Cortelazzo (1819-1903) was an uneducated artisan who worked in Vicenza and began his practice by counterfeiting antiquities for Italian dealers. Indeed, the probably recent attempt to remove the date of the present piece may have been made in order to pass it off as a Renaissance object.

Cortelazzo's genius was such that his own compositions were accepted at major exhibitions abroad, and as a consequence he received a number of important English commissions. In 1870 he constructed a large clock in the shape of a Renaissance doorway for William Spottiswoode (1825-83), president of the Royal Society from 1878 to 1883; this may now be seen in the Sheffield City Museum. The initials ‘WS’ on the present item must certainly be Spottiswoode’s if the earlier date is accepted.

During the 1870s Cortelazzo executed a number of English commissions. He worked for, among others, the Henry Layards, who became his patrons, and Sir William and Lady Drake. Sir William took Cortelazzo, who must already have known Plácido Zuloaga's work through several international exhibitions that both artists attended, to see Alfred Morrison's collection of objects by the Spaniard, and Cortelazzo was reportedly impressed by what he saw.

Apparently in 1869, shortly after their marriage, Henry Layard gave his wife Lady Enid a belt by Cortelazzo. An 1870 portrait shows her wearing a belt comprised of a number of decorated metal plaques, which is certainly by Cortelazzo. A very similar belt, signed by Cortelazzo and dated 1871, is in the collection of the Victoria and Albert Museum (CIRC.336-1958).