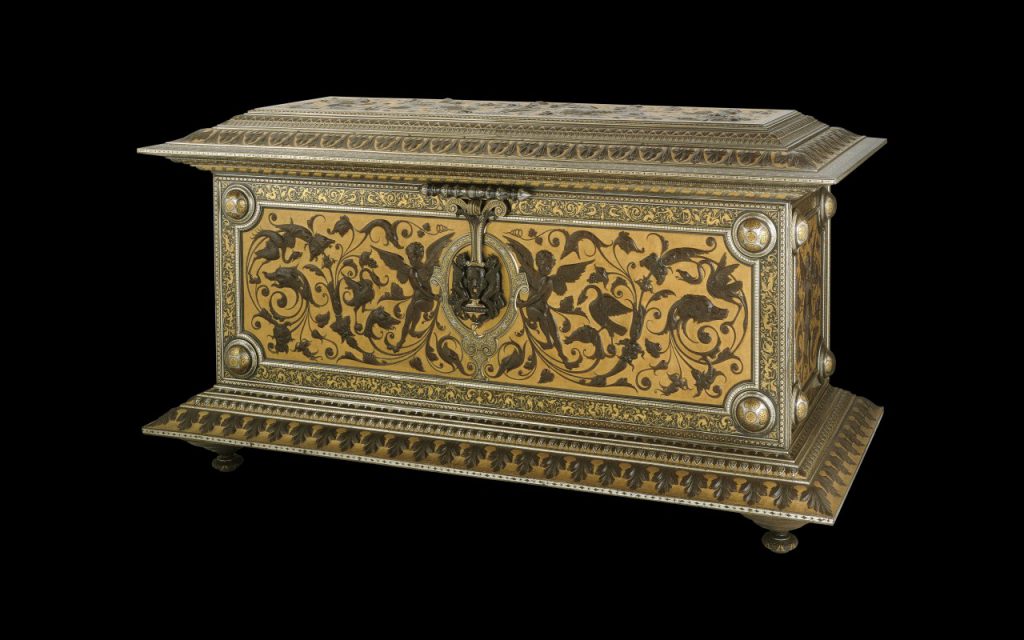 The four vertical faces and the top have repoussé ornament executed in high relief in seventeenth-century baroque design depicting winged putti amid animal and vegetal grotesques. The large front panel is divided into two halves, the right being the mirror image of the left. The decorated plates were blued prior to the application of gold leaf to the stippled background. Small details of gold damascene decorate the relief images, visually uniting them with the surrounding gold ground.

A damascened border with raised mouldings frames the panels, and in each corner is set a damascened iron boss. Such bosses, in iron and also in lapis, are a continuing feature of Plácido's work. The pronounced overhangs of the casket’s lid and identical skirt have a relief-chiselled acanthus border. Flattened bun feet raise the casket from the floor.

The entire interior is decorated in white painted enamel with black ornament repeating in silhouette the baroque style of the exterior panels. A large forged and chiselled iron lock and hasp with its baluster-shaped hinge completes the casket's decoration. Two identical hinges are affixed to the rear of the lid.

Centred on the rear vertical iron plate, and surrounded by baroque ornament, is a large cartouche containing the following inscription in block capital letters:

This enormous iron casket was thus undoubtedly made by Plácido Zuloaga, apparently as his first commission for Alfred Morrison.  Although correspondence relevant to its manufacture is extant, it is recorded as being in the drawing room of Morrison's London home at Carlton House Terrace in an 1879 article in the Magazine of Art. Since the cassone has long been known as the ‘Fonthill Casket’, it must originally have been among the furnishings of Fonthill manor, which Alfred inherited upon his father's death in 1857.

The manufacture of this casket would have required a team of specialists working throughout the two years indicated by the inscription. The iron construction would have involved forgers, filers, and chisellers. The final finish would have been executed by damasceners and engravers, who would have completed the exterior and interior detail. Given the importance of this piece, probably a tour de force to ensure Alfred Morrison's continued sponsorship, Plácido would have been directly involved at every step in its manufacture. The grandeur of the concept of what must have been his first major commission for a client outside the royal household prefigures that of Plácido's subsequent great ‘case’ pieces, the Prim mausoleum and the Loiola altar.