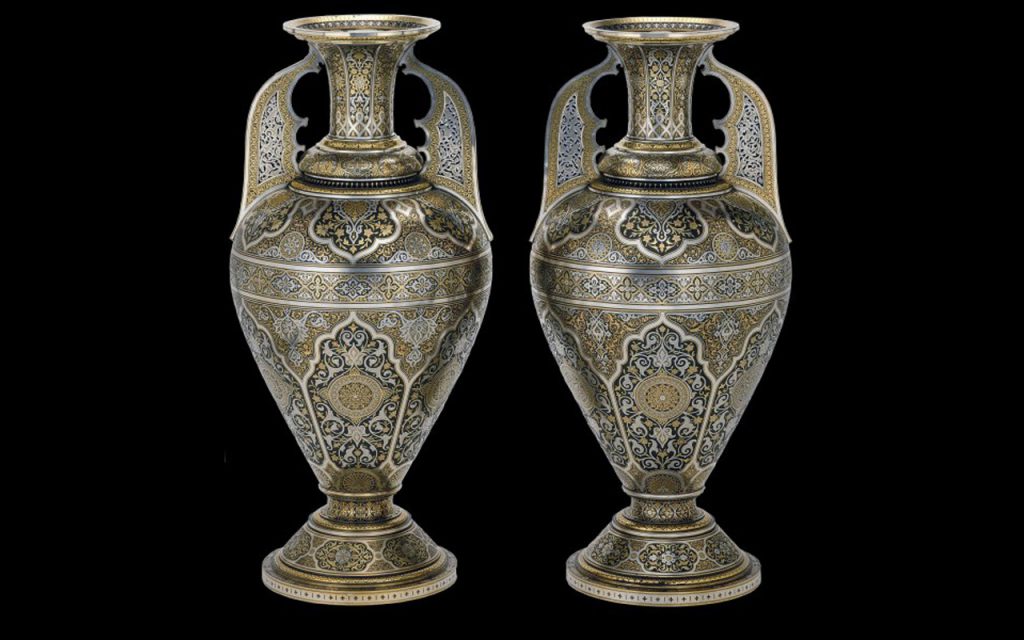 The pair was obviously inspired by the medieval Spanish Nasirid, so-called Alhambra, vases. These footless amphora-like urns date from the thirteenth to fifteenth centuries and, while they have been found in other areas of the Mediterranean, are usually associated with southern Spain. Their purpose seems to have been purely decorative, their ornament painted in copper lustre glaze over a white glaze, to which cobalt blue was added in their later period.  Their large wing-like handles serve simply to provide greater surface for decoration.

Plácido's urns, at slightly more than one meter in height, are approximately the same size as their Nasirid counterparts, and the distribution of their damascene ornament shows their author's familiarity with the southern originals. In fact their pattern may possibly be traced to an actual piece, apparently discovered in the eighteenth century and now in the Museo Nacional de Arte Hispanomusulmán in Granada (Inv. 290).

Like their Hispano-arab counterparts, the bodies of the urns are divided into two decorative fields by an encircling horizontal band. The areas above and below contain a series of demarcated panels suggesting elaborate arches, all outlined by broad bands of silver leaf. The panels and the band contain a profusion of gold and silver damascened ornament over a stippled ground, in the form of stylized leaves or palmettes (atauriques) and geometrically filled circles. A number of the circles contain an elaborate eight-pointed star, which is a decorative element most often associated with Hispano-arab lustreware pottery manufactured at Manises, near Valencia. A series of alternating anthemia and filled cartouches decorates the bulbous support for the neck, while the latter is divided into eight vertical panels containing varying geometric and vegetal designs. The handles have broad borders of damascened anthemia enclosing pierced foliate patterns. The inner edge of the handles is irregularly scalloped, perhaps suggesting a lobed arch. The base of the foot is covered with silver leaf decorated with a series of tiny quatrefoils. These figures appear so frequently as a base decoration on Plácido's larger objects that they might be considered a ‘signature’ feature.

Interestingly, the patterns in general are more than indirectly derived from Alhambra vase no. 290, whose decoration is not typical of its counterparts. These include the vertically divided neck with its geometric ornament, the anthemia surrounding the base, the use of circles, and the division of the body ornament with its geometric and foliate elements, all of which are here encountered in like composition, excluding only the gazelles in the main upper panels of the original.

Did Plácido know the Alhambra vase first hand, and was he working from this knowledge? If so, he seems to depart from his model in the scallops of the handles. However, B. Martínez Caviró in her ‘La Loza Dorada’, reproduces, without attribution, two late eighteenth-century engravings from a single source illustrating Alhambra vases. One (Fig. 46) shows no. 290 now in the Granada Museum, while the other (Fig. 47) shows an unknown vase which is perhaps unique in having the inner line of its handles scalloped. These two engravings in this unidentified work may well have served Plácido as a source of ornament not only for this pair of vases, but for other works as well.

These urns were commissioned by Alfred Morrison and are recorded as being in his dining room at Carlton House Terrace in 1879. In 1878 they were exhibited in Paris before being delivered to Morrison in London the following year.