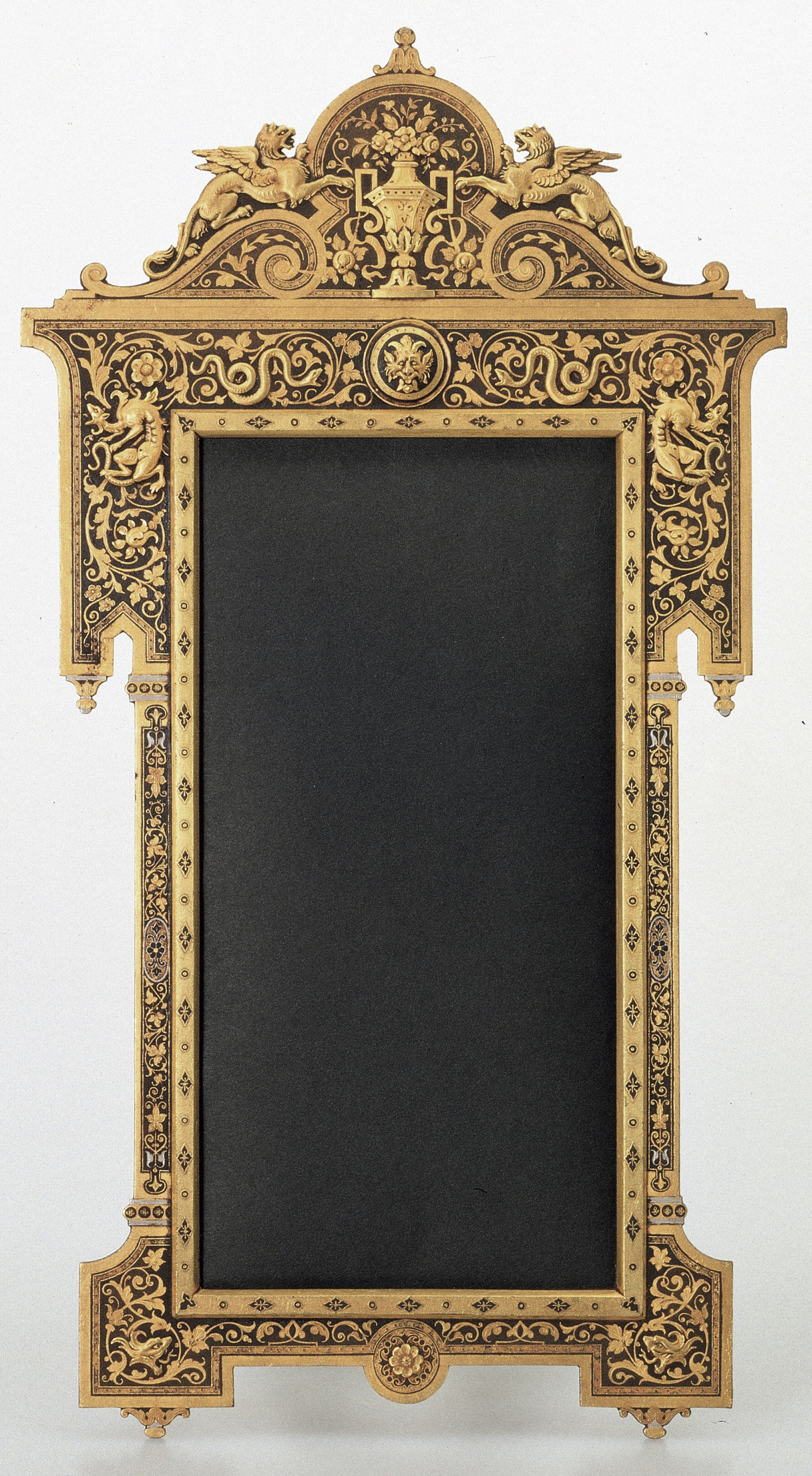 This frame is constructed in two parts; the front is profusely ornamented with gold damascene over a finely hatched ground and with fourteen chiselled and gilded appliqués. The inscription on the removable back, which consists of a single iron plate, reads: ‘Mendizábal and Company, Eibar, Made for F.A. Almier, Lisbon’.

This type of frame, having most of its surface in the upper half, is peculiar to Eibar, but it may have its inspiration in eighteenth-century models. The style is first encountered among pieces produced by Plácido Zuloaga during the final two decades of the nineteenth century, and frames of this outline were included in the repertoire of Eibar damascening houses until at least the Spanish Civil War (1936-39). The style is suggestive of a doorway with an exaggerated pediment whose purpose is to offer a broad background for damascene ornament. Some examples even have a backplate with damascened human figures which, when there is no picture or mirror in place, reinforce this impression. Many of these frames have designs of Eastern inspiration (see ZUL 23). There is, however, a small group of frames of similar format decorated in what was called in Eibar renacimiento (Renaissance) style, which included Renaissance, baroque, and neoclassical elements, some derived directly from contemporary pattern albums.

The defined pediment applied over the frame's ‘lintel’ contributes to its architectural appearance. A broken scroll, surmounted by applied golden griffins worked in the round, flanks a classical urn capped by a horseshoe arch. A plain gold band encircles the entire frame; on the pediment and adjacent upper portion, there is an inner band of matte gold with beading. Enclosed within these borders, the black background sets off baroque floral damascening executed in ‘red’ and ‘green’ gold wire, small elements in silver leaf, applied medallions, and three-dimensional golden figures, including serpents and grotesque beasts. The inner border of the frame is bevelled and surrounded by a gold border with floral rosettes and beads.

The style of ornament that combines wire damascening with three-dimensional gold and silver appliqués appears to have come into vogue around the turn of the century. The concept of applied figures may derive from the dark iron chiselled relief used by Eusebio Zuloaga around the middle of the century. This was subsequently reflected in the sculptured handles of Plácidos urns (see ZUL 94). Three-dimensional chiselling, black and gilt, became prominent towards the very end of the nineteenth century and continue well into the twentieth.

The two Mendizábals currently recorded are Fausto, the principal designer of the Loiola altar, and his son Toribio, who kept a workshop after his father's death. This shop may have become Mendizábal y Compañía, the producers of this frame. Given the vagueness of this chronology, the suggested date of 1900 for the frame's production is based mainly on its style and technique rather than family history.