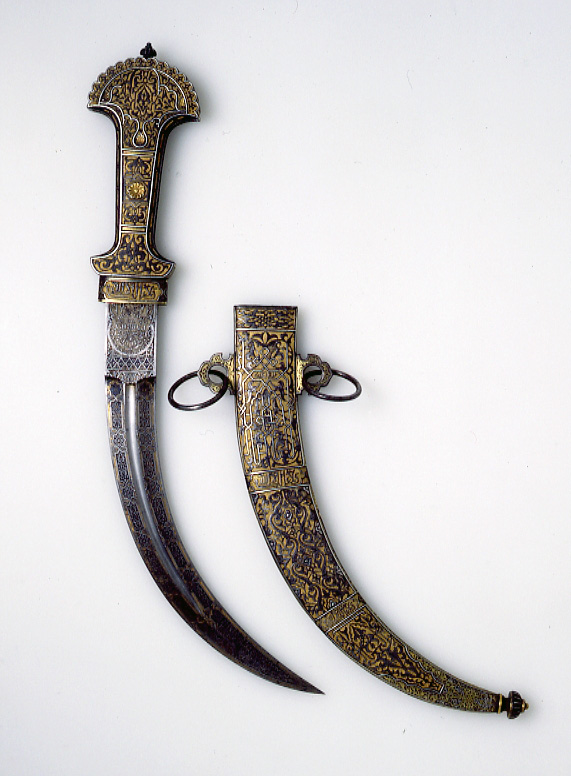 This dagger is made in the form of a Moroccan jambiya, a type of double-edged dagger which, with some stylistic variation, was widely used in countries under Arab influence. The Moroccan version has a curved blade sharpened its entire length on the outer curve, and for about half its length on the inner. This example, however, has a squared ricasso and both edges are sharp from this to the point of the blade.

The flattened hilt is of forged iron chiselled in low relief. The relief is in the form of palmettes, arabesques, and stylized foliage. In the centre of the grip is an eight-pointed star enclosing a chrysanthemum. This probably covers the pin holding the tang of the blade. Heavy gold leaf covers the punched background, and inlaid silver wire outlines the chiselled areas. The flattened pommel area terminates as if it were the reverse image of a mudéjar lobed arch. An iron band adjacent to the blade contains the Nasirid motto.

The decoration of the blade consists of chiselling and punching to reduce the background. The patterns are generally the same as on the hilt. Above the ricasso containing the maker’s signature is a band with decoration in imitation of mudéjar plasterwork. The decoration of the back of the ricasso is the same, but without any inscription. Continuing to the point, both sides of the blade are ornamented with a series of eight-pointed stars and rectangles containing arabesques. The background has been both blued and gilded in alternating areas.

The background of the scabbard has also been reduced by punching. Its ornament is thematically the same: geometric strapwork, palmettes, and two bands containing the Nasirid motto. Two ear-like projections holding the carrying rings are damascened in gold and silver.  At the tip of the scabbard, there is a short area of damascening in the form of a chape which is merely suggested by the ornament. A fluted button, or shoe, on a stem terminates the scabbard. A similar button caps the grip of the dagger.

The dagger and its scabbard are housed side by side in a walnut case lined in blue velvet and satin. The two pieces are accommodated in fitted recesses and held in place by the padding of the hinged cover. The case has brass hinges and a keyed lock; its base is covered with blue felt.

The surface of the lid is finished in natural colour. A border of some 20 mm is established by the inlay of three adjacent narrow strips of wood, the outer two light, and the inner black. In the centre of the lid is a cast gilt bronze monogram, a superimposed ‘A’ over the Roman numerals ‘XII’ surmounted by the Spanish royal crown.

This dagger was obviously presented to King Alfonso XII, (1874-1885) probably on the occasion of a visit to Toledo. There may have been insufficient forewarning of the king's visit since there is no presentation inscription on the piece itself. This contrasts with a visit in 1871 by General Sherman, veteran of the American Civil War, when he was presented with a sword bearing a long etched inscription on its blade. The king's crowned cypher could quickly have been applied to the case if the elements were already on hand.

There is very little damascene on the dagger and its scabbard compared with the overall decoration, which is typical of the Toledo products of this early period. What is present is restricted to rather obscure areas: the extreme top of the hilt, the scabbard flanges, and its chape.