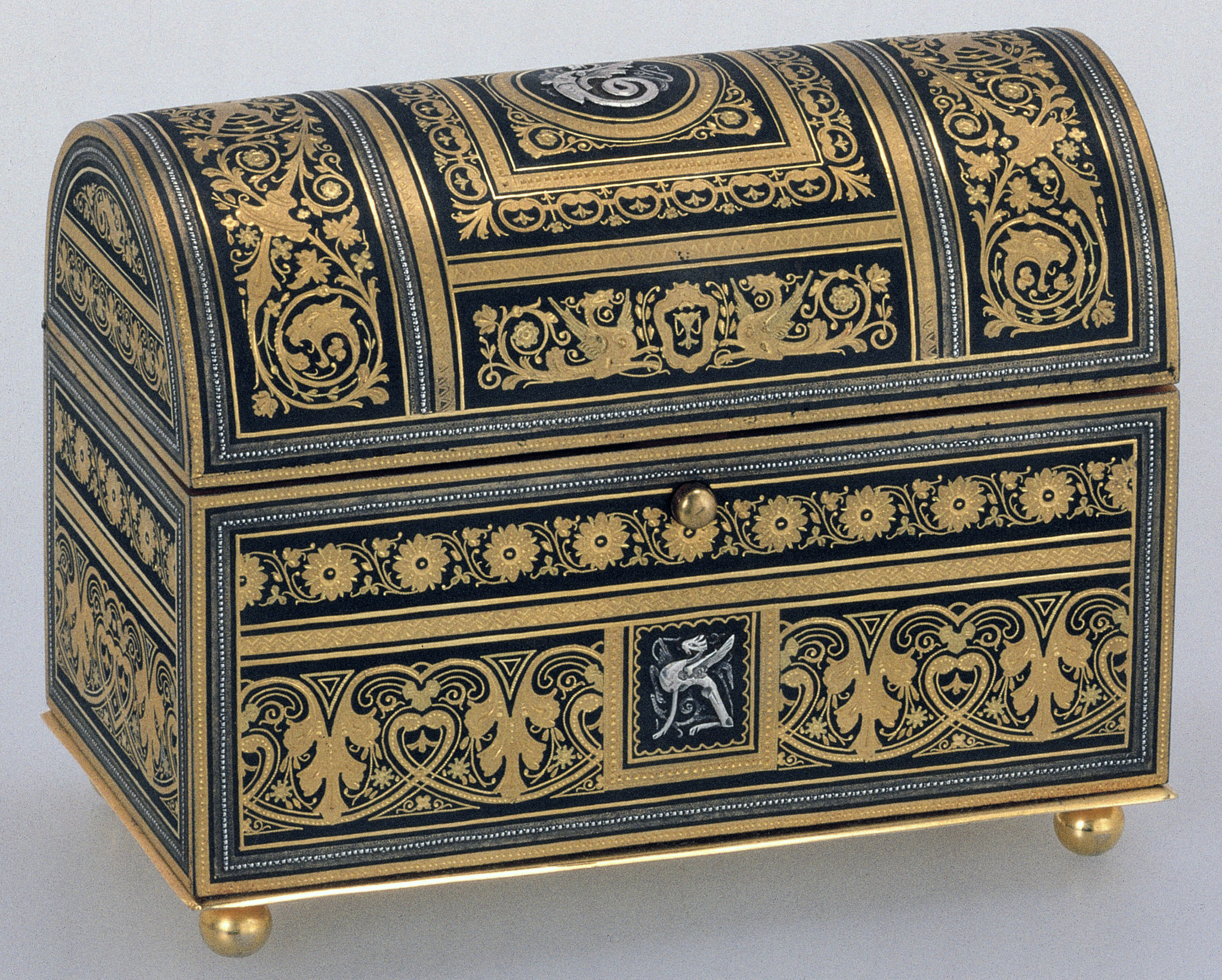 The iron casket has its domed lid hinged at the rear and secured by a push button catch at the front. It rests on turned and gilded ball feet. Like ZUL 4, the present piece has its applied ornament confined within well-defined rectangular areas which, in this instance, have not been applied. On the lid, the arrangement is quite similar other piece in the Collection; a central rectangle is surrounded by two broad and two narrower rectangular borders, all separated by strap-like dark and light gold divisions. Here, a central roundel frames a wyvern executed in silver over a black ground. The surrounding panels are filled with rinceaux or floral volutes terminating in grotesque animal’s heads. On the front of the lid the horizontal panel contains confronted wyverns with a shield-like frame between them, which may represent the open jaws of a detached monster’s head. This contains a three footed cup with swagged handles.

The front panel of the box is divided into two narrow horizontal rectangles of unequal size. They are separated by a matt gold band stamped with a zigzag pattern. Parallel to this on either side, and completely surrounding the two panels as a unit, are dividing-strips of green gold. In the centre of the lower rectangle is a square applied plaque, its inner edges formed of a cusped line of gold wire. The square contains the very stylized figure of a seated griffin in silver bulk, possibly cast. Its counterpart on the back is a silver bird on a gold ground. To each side of the figures, gold damascened ornament depicts large downward-pointing acanthus leaves with surrounding arcs and curves based loosely on the C-scroll. The narrow rectangle above contains a row of hidden blossoms in gold and silver damascene with connecting gold foliage. These patterns are continued around the four lower sides of the casket. They are framed, as are the panels of the lid, by dark metal strips with a central line of silver beading.

While the inspiration for the ornament of the lid is predominantly Renaissance/baroque, following the lead of Plácido, the bottom section has the distinct flavour of art deco of the 1920s and 1930s, which may well indicate the period of its manufacture.