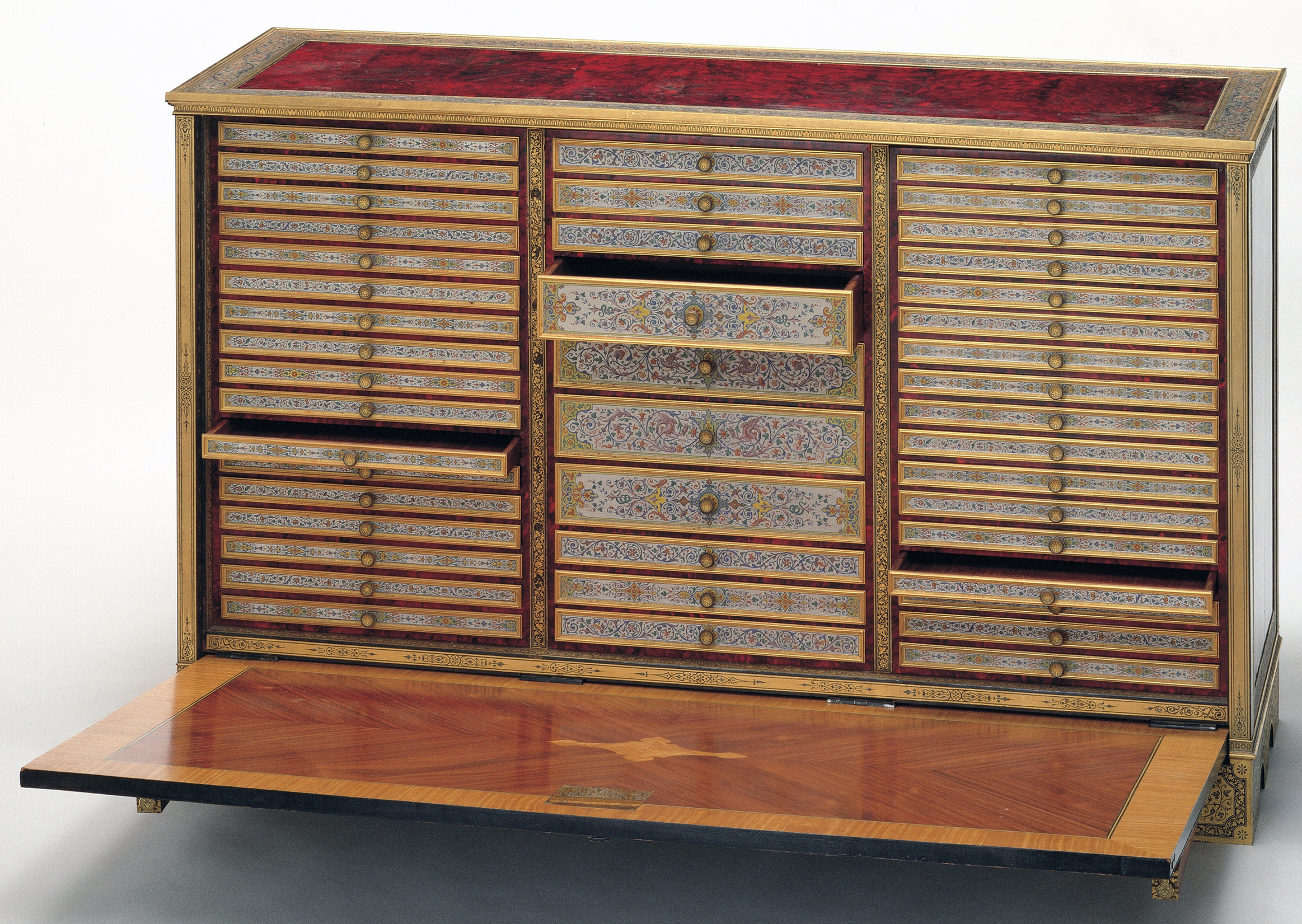 The case of this desk is of wood covered with figured rosewood veneer and satinwood banded borders. The interior is fitted with forty-four shallow drawers whose fronts are enamelled in intricate baroque floral patterns in red, green, and gold over a silvered ground. The drawer fronts are framed by a gold relief moulding, and have damascened button pulls.

The desk is made to sit on a table in the manner of a traditional Spanish vargueño or fall-front writing-desk, after which it has obviously been modelled. The vargueño was an important and decorative furnishing, popular in Spain during the sixteenth and seventeenth centuries. While its traditional walnut exterior with iron trim was severe, its many interior drawer fronts were extremely elaborate, often being decorated with carved, painted, and gilded bone or staghorn. The vargueño continued in use during the eighteenth century, when it was gradually replaced by the writing-desk of international style. Eighteenth-century examples responded to the neoclassical style, although the most common formula for the interior was drawer fronts covered with a staghorn or bone veneer, often with floral tracery, red-stained tortoiseshell veneer, and a black relief-moulded border around the drawer fronts. The woodwork was stained or enamelled black.

During the three centuries the vargueño retained its popularity, it was most often mounted upon its own small table fitted with two sliding pulls to support the heavy drop front which served as the writing surface.

Plácido's writing-desk, by virtue of its materials, is a departure from his accustomed repertoire, and since ‘Señor Zuloaga is a metal-worker and not a wood-carver’ (see The Zuloagas of Eibar), it seems safe to consider it a rather special commission. Its construction would have required subcontracting of specialists for the woodwork and veneer, and for the preparation and application of the tortoiseshell.

While the appearance of the desk suggests an eighteenth-century vargueño, the figured wood veneer and banding are more appropriate to Fernandine (Fernando VII, 1808, 1814-33) or early Isabeline (Isabel II 1833-68) furniture. This piece is unrecorded, unless it may be identified with the chest and table Mujica (see Monografía histórica de la Villa de Eibar) describes, without having seen it, as ‘all enamelled in red and yellow, and so well made that even the most informed consider it as coming from India’.  Unlike earlier desks of this type, this has the pull-supports for the drop-front incorporated into its own base, suggesting that it was never intended to have a matching table, although one has later been associated with it.