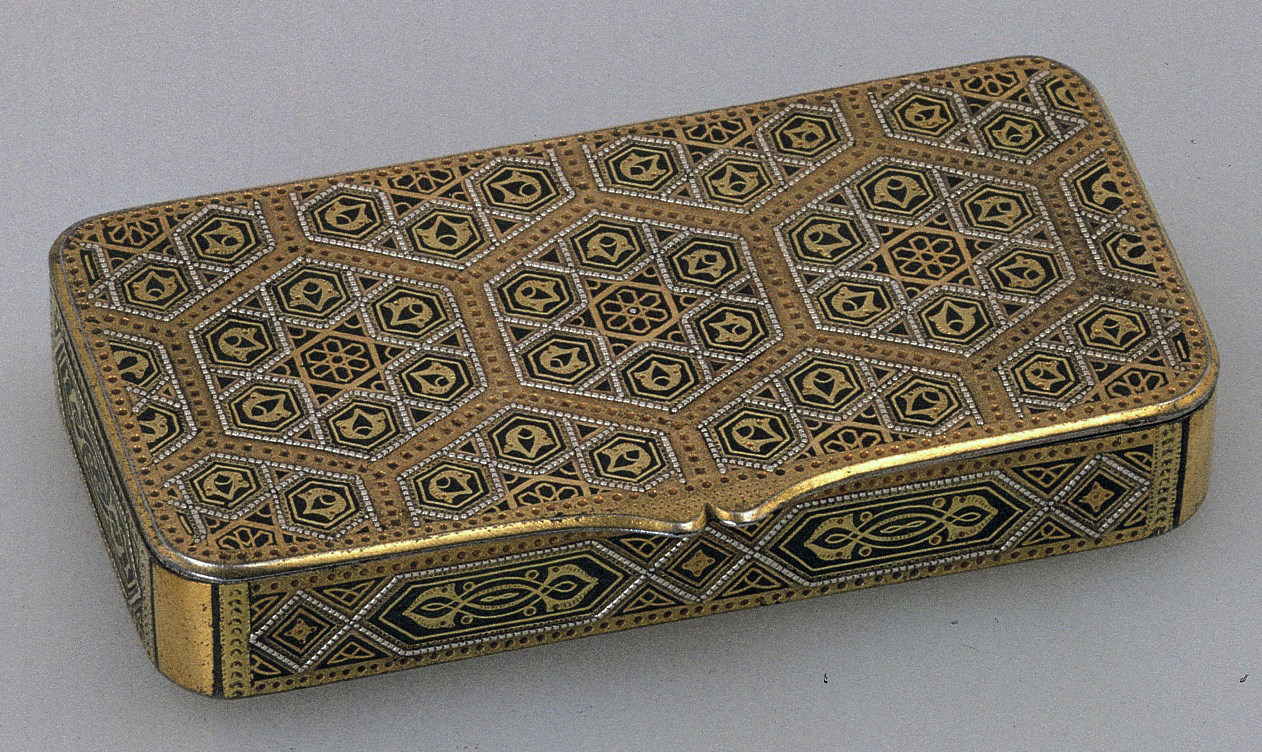 This small iron box was probably intended to hold visiting cards, although its size would also make it appropriate for holding pills or even snuff. Its two-colour gold damascened ornament is based on many repetitions of hexagons within hexagons. The resultant honeycomb pattern produces three large hexagons cantered in the middle of the lid, their adjacent hexagons incomplete at the edges. Grouped within each large hexagon are seven smaller ones, six around the inner angles and one at the centre outlined in silver. This arrangement produces a six pointed star surrounding the central hexagon, which in turn contains three elongated hexagons crossing each other in the form of a star. In the centre of the middle one is a tiny silver bead. Each of the surrounding small hexagons within the large containing hexagon is outlined in green gold and contains addorsed palmettes, also of green gold. The space between the small hexagons is defined by lines of silver beading, while the large hexagons are separated by ribbons of matt red gold decorated with punched dots. This pattern is continued in green gold around the outer edge and on the projecting handle of the lid. The sides reflect the same ornament that is used on top; the bottom is hatched overall and has at its centre the Nasrid motto prominently displayed. The damascened name ‘TOLEDO’ on the base has been almost totally obliterated.

The damascene ornament of this box derives from mudéjar painted wooden artesonado ceilings, marquetry, or tiles (azulejos). It is in essence an exercise in geometry rather than an inspired artistic endeavour. Is seems that many of these commercial objects took as their source the artesonado ceilings of the chapter house of Toledo cathedral, and of the college hall at Alcalá de Henares. Both date from c. 1500, and their elements are to be found on numerous Toledo products. This box, quite ordinary in itself, conforms to what the public has been led to expect of commercial Toledo damascening at the popular level.